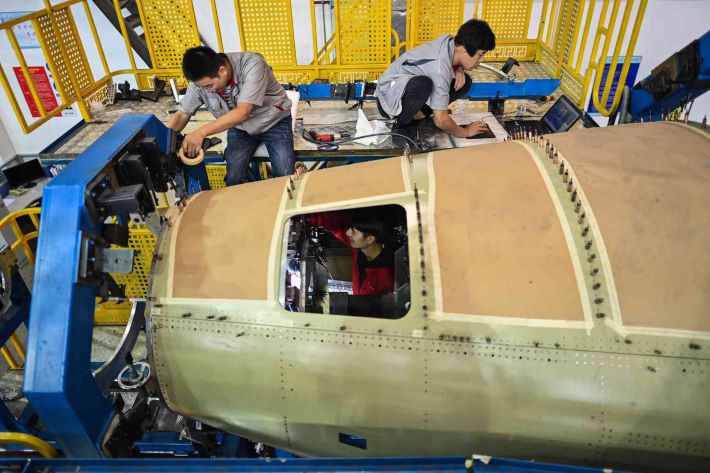 (Bloomberg) — A U.S. move to increase pressure on Chinese companies could threaten the nation’s ambitions to compete with Boeing Co. and Airbus SE.

The Trump administration’s addition of Commercial Aircraft Corp. of China, better known as Comac, to a Defense Department list of companies with alleged Chinese military ties comes just days after a breakthrough in the state-backed jet manufacturer’s effort to win customers when an Indonesian airline agreed to buy its planes.

If President-elect Joe Biden doesn’t reverse the move, American investors will be prohibited from buying securities of companies on the list, and will have to divest their holdings by November. That won’t impact Comac because it’s not publicly traded, but other companies Trump initially put on such lists — including Comac shareholder Aviation Industry Corp. of China — have since found themselves targets for more severe sanctions, including curbs on access to American technology.

That could be potentially crippling for Comac, which relies on American imports for its jet engines and other parts, according to Shukor Yusof, founder and aviation analyst at Endau Analytics.

“China doesn’t have the domestic capability to provide the necessary components so they’re very much reliant on U.S. components,” Yusof said.

Comac’s C919, a narrow-body alternative to Boeing’s 737 model and Airbus’s A320, is in its test phase. About 60% of the main suppliers to the C919 are American companies, according to a report by the Center for Strategic & International Studies, a Washington-based think tank.

“The engines are the hardest part,” Bloomberg Intelligence senior analyst George Ferguson said. “There are only two and both have American leads: GE and Raytheon.”

If Comac were shifted to the U.S. Commerce Department’s Military End-User List, which sees companies denied access to American technology without specific permission, it would be “impossible” to source engines for the C919 without a waiver from the U.S. government, Ferguson said.

After being blacklisted as having military links in December, China National Offshore Oil Corp., or Cnooc, was shifted to the Military End-User List on Thursday. AVIC, a state-owned conglomerate that owns part of Comac, was first identified as military-linked in June and by year-end the group and several of its subsidiaries had been moved to the Military End-User List.

“If the pandemic situation is improving, we are hoping to start receiving deliveries of the aircraft starting next year,” Budiman said in a phone interview Friday.

Transnusa is waiting for regulatory clearance to operate the ARJ21 — developed as a competitor to Embraer SA’s E-Jets — in Indonesia, including a decision that the fleet will have the necessary infrastructure for maintenance.