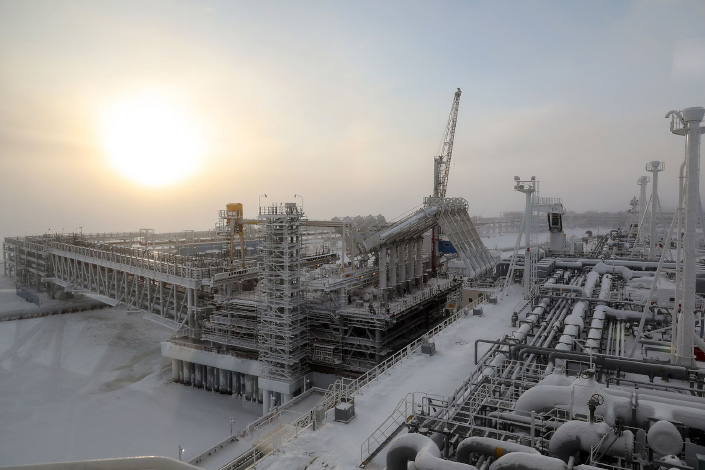 An Arctic tanker loading liquefied natural gas at the Yamal LNG plant in the port of Sabetta, Russia. Photo: Bloomberg

(Bloomberg) — Russia is preparing to make the earliest-ever shipment of liquefied natural gas to Asia, taking advantage of thinning ice in the Arctic Ocean and paving the way for a record-long navigation season this year.

The super-chilled cargo from Novatek PJSC’s Yamal LNG facility in early May will beat last year’s record for the start of eastbound voyages through the Northern Sea Route by almost two weeks if the plan works out, according to people familiar with the situation. It will travel with an ice-breaker.

The Northern Sea Route, stretching more than 3,000 nautical miles (5,556 kilometers) between the Barents Sea and the Bering Strait, is the shortest passage between Europe and Asia. Yet its eastern part is usually shut for navigation for several months at the start of the year due to thick ice, limiting shipment potential. Its increased use underscores how quickly the pace of climate change is accelerating in the Earth’s northernmost regions.

The exact timing of the LNG shipment will depend on the thickness of the ice and weather conditions, said the officials, who asked not to be identified as the schedule is not public or finalized.

“The possibility of such a voyage in May is under discussion,” Nikita Sekretarev, spokesperson for Russian shipping company Sovcomflot PJSC, said declining to provide further details. Sovcomflot provides the Christoph de Margerie tanker to Novatek’s Yamal LNG project.

Russia expects the passage to rival the Suez Canal as Arctic ice thins out. But climate experts warn that an increase in ocean-going vessels through the route could cause more damage to the environment.

Last year saw another period of intense heat. Especially in parts of the Arctic and northern Siberia, where temperatures in some regions were more than 6 degrees Celsius higher than average.

Earlier this month, Novatek sent two LNG ice-class tankers, the Christophe de Margerie and the Nikolay Yevgenov, to China through the NSR. The vessels don’t need ice-breaker support as the current conditions in the eastern Arctic are mild, according to Rosatom.

The voyage confirms that “commercial transportation of cargoes in the eastern area of Russia’s Arctic in autumn-winter season is possible for one to two months longer, bringing the year-round navigation via the Northern Sea Route one step closer,” Sovcomflot said.

However, the tankers, scheduled to deliver the super-chilled cargoes to China in late January, will use an ice-breaker on their return to Russia across the passage in February, according to the industry officials.

Until now, a cargo ship has never made a February voyage in the eastern Arctic, according to Sovcomflot, who owns the Christophe de Margerie.

Sovcomflot confirmed the plans for the tanker. The U.S.-based Teekay LNG Partners LP, the owner of the Nikolay Yevgenov, did not respond to Bloomberg’s request for a comment.

The planned February return voyage is part of “the systemic efforts to gradually extend transit navigation in the eastern sector of the Arctic,” the Sovcomflot spokesman said. “In the future, the goal is to set up a safe round-the-year navigation” across the Northern Route, he said.