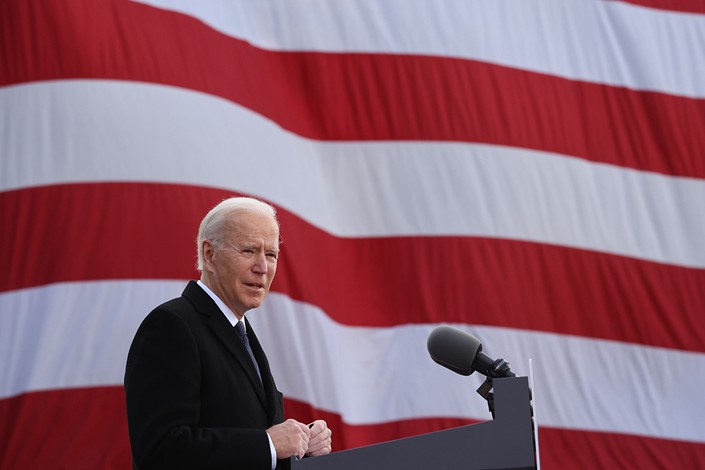 One day before his inauguration, then-U.S. President-elect Joe Biden speaks at a national guard reserve center named after his deceased son, Joseph “Beau” Biden III, on Jan. 19 in the U.S.

(Bloomberg) — U.S. President Joe Biden’s administration is approaching its relationship with Beijing with “patience” and plans to review hard-line policies that were a hallmark of Donald Trump’s presidency, Press Secretary Jen Psaki said.

The Biden administration plans an interagency review of measures including trade tariffs and the delisting of certain Chinese companies that were enacted by Trump, Psaki said.

“We’re starting from an approach of patience as it relates to our relationship with China,” Psaki said.

Her comments suggest that the Biden administration may be open to altering Trump’s actions. Biden himself has given no hint of a change in approach, telling the New York Times last month that he won’t make any immediate moves on Trump’s tariffs on $350 billion worth of Chinese imports.

The Biden administration is looking at “a range of regulatory actions and a range of relationships with companies, as it relates to Chinese investments, and other issues as well,” Psaki said.

The former administration had been ramping up its attacks on China over several months, imposing sanctions over human-rights abuses and the crackdown on Hong Kong. The U.S. had also sought to curtail economic links and deny Chinese firms access to American capital.

The wording of Trump’s November order caused confusion at the NYSE, prompting the exchange to reverse its response and the administration to clarify its requirements.

The order bans trading in certain securities starting Jan. 11. If Biden leaves the measure unchanged, U.S. investment firms and pension funds would be required to sell their holdings in companies linked to the Chinese military by Nov. 11.