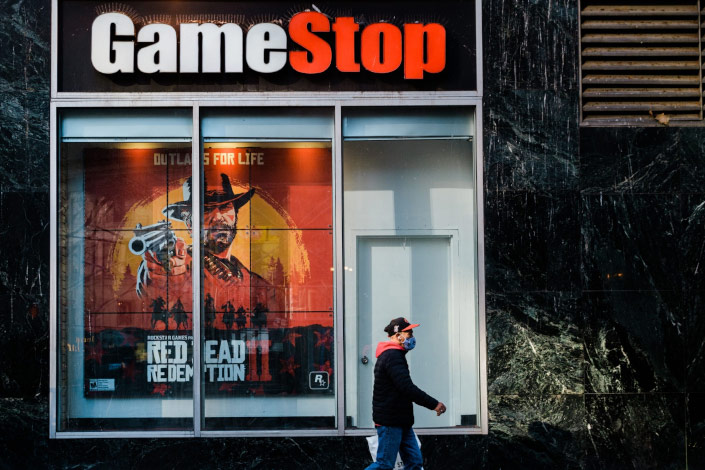 (Bloomberg) — GameStop Corp. had the biggest day yet of its dizzying rally, adding more than $10 billion in market value, as bullish day traders kept the upper hand over short sellers.

The shares advanced 135% to $347.51 at the close Wednesday after triggering three volatility halts. The video-game retailer’s market value has risen more than 18 times this month to about $24 billion, making GameStop bigger than almost half of the companies in the S&P 500 Index.

Euphoria born in day-trader chatrooms has turned GameStop into the biggest story of the retail era, its improbable surge an emblem of the newfound power of individual investors. At the same time, it’s become a major headache for institutional investors betting it would fall.

The meteoric rally has left short sellers counting the cost in a battle with day traders who have taken to the Reddit social media platform to encourage others to follow their lead. Melvin Capital closed out its short position, while Citron Capital’s Andrew Left said the firm covered the majority of its short in “the $90’s at a loss of 100%.”

“It does feel like rationality and fundamentals are just kind of dead,” J Capital Research co-founder Anne Stevenson-Yang said by phone. “If you’re short you’re in a very difficult position because you have to buy the stock to get out, so you end with a heavily overvalued stock.”

The story catapulted past the market and was said to have caught the attention of Treasury Secretary Janet Yellen and others in the Biden administration. Senator Elizabeth Warren said she intends to make sure regulators “wake up and do their jobs.”

Federal Reserve Chair Jerome Powell sidestepped several questions about the market implications of GameStop’s rally, refusing to comment on any individual stock or a single-day move in the equity market. Instead, he said that financial-stability vulnerabilities overall are “moderate.”

The stock’s gains were fanned late Tuesday after Tesla Inc. chief Elon Musk tweeted a link to a Reddit thread about the company. But famed fund manager Michael Burry warned that the manic rally has gotten out of hand, calling the stock’s rise “unnatural, insane, and dangerous.”

Venture capitalist Chamath Palihapitiya, who pushed the gains higher Tuesday after tweeting about buying calls, said on CNBC that he closed his GameStop position. He said he will donate $500,000 from his profits and original position to the Barstool Fund for small businesses.

“It really just goes to show the classic saying that markets can stay irrational longer than you can stay solvent,” said Greg Taylor, chief investment officer at Purpose Investments. “So you can try to fight this as long as you want but at some point you just have to give in and just step to the sidelines. That feels like the phase of the market we’re in right now, where things are going a little crazy and definitely divorced from fundamentals.”

Another note of caution was provided Wednesday by Bank of America Corp. analysts. While raising their price target to $10 from $1.60 to reflect the stock’s recent surge, they noted that GameStop is in “a weaker not a stronger place” and reiterated their underperform recommendation.

“While it is difficult to know how much very high short interest and retail ownership could continue to put upward pressure on the shares, we think fundamentals will again factor into valuation,” analysts led by Curtis Nagle wrote in a note. “We remain skeptical on the potential for a turnaround.”

“It is unwise to try to stand on principle against an angry mob,” said Wedbush Securities Inc. analyst Michael Pachter, who had a price target of $16 for GameStop as of Jan. 11. “The shorts have to mark their investments to market value, so if they’re short at $20 thinking the stock will go to $10 and it goes to $300, they lost $280 trying to make $10. Frankly, I’m surprised they didn’t close much lower than here.”

The epic short squeeze has set off a search for other companies that might be similarly vulnerable, with Express Inc., Bed Bath & Beyond Inc. and AMC Entertainment Holdings Inc. among stocks surging on Wednesday.

Online brokerages including Robinhood Markets and Charles Schwab Corp. were hit again by service disruptions as the wild swings transfixed traders. TD Ameritrade told clients in a message that it has put in place several restrictions on some transactions in GameStop, AMC and other securities.

“The thing about these manias is there’s always enough people who make 600% or 1,000% and tell everybody about it that everybody gets excited about it,” said Anne Stevenson-Yang. “The thing is it’s not the majority of those people and eventually a whole bunch of people lose money.”