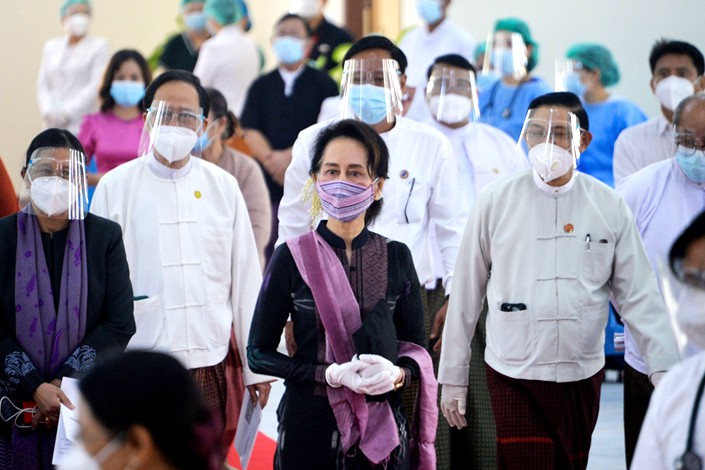 (Bloomberg) — Myanmar’s military detained Aung San Suu Kyi, declared a state of emergency for a year and voided her party’s landslide November election victory in a setback for the country’s nascent transition to democracy.

Army chief Min Aung Hlaing’s office said he took the action in response to alleged voter fraud and the military would hold a “free and fair general election” after the emergency is over. An order by acting President Myint Swe, a former general aligned with the army, granted full authority to the army chief to run the country, saying it was necessary to act now before the new parliament sessions began this week.

“If such a problem is not addressed properly, then there will be obstacles in the nation’s democratic transition,” the order said. The army statement said voter rolls would be checked and the election commission would be “re-established.”

Suu Kyi urged the country’s 55 million people to oppose the military’s action, calling it “an attempt to bring the nation back under the military dictatorship without any care for the Covid-19 pandemic people are facing.”

“We urge people to strongly oppose the unacceptable military coup,” she said in a statement posted on a party Facebook page that was confirmed by a spokesperson. “The people themselves are the most crucial.”

It was unclear how many people were held, and under what terms. TV channels, phone and internet communications were all spotty, making it difficult to get information from the country. The military said banking operations were back to normal after experiencing delays due to internet and phone outages.

Tensions had been brewing for the past few months, with the military and its political factions demanding authorities investigate allegations of mass voting fraud in just the second general election with widespread participation after decades of army rule. Myanmar’s election commission last week had labeled the vote transparent and fair, and the U.S., United Nations and the European Union urged the military to respect the results.

On Sunday, the military — known as the Tatmadaw — denied objecting to the outcome of the election and said it “finds the process of the 2020 election unacceptable.” The 2008 constitution allows the military to take power during a state of emergency that could cause disintegration of the union or “national solidarity,” effectively allowing soldiers to take power for vague reasons.

“It’s a really cynical take on their justification to power,” said Hunter Marston, a Canberra-based political analyst who has written about Myanmar for several publications. “We could see pretty widespread protests in major cities and even around the country in smaller towns, especially in Yangon.”

On Monday in Asia, the U.S. and Australia urged Myanmar’s military to release all those detained and to respect the results of the election. “The United States opposes any attempt to alter the outcome of recent elections or impede Myanmar’s democratic transition, and will take action against those responsible if these steps are not reversed,” White House spokeswoman Jen Psaki said in a statement.

Myanmar’s transition to democracy had prompted the U.S. and European Union to lift sanctions, with then- U.S. President Barack Obama hailing the reforms during a landmark visit to the Southeast Asian country in 2012. Foreign investors flocked to the country looking for opportunities, and the country sought to open up its capital markets.

But initial optimism quickly dissipated due to a violent crackdown against Muslim Rohingyas that prompted accusations of “genocide” against Suu Kyi’s government. That has tainted the international image of the 75-year-old leader, who had won the Nobel Peace Prize while under house arrest during a military regime that effectively cut Myanmar off from the world.

The Yangon Stock Exchange now only has six listed companies, with foreigners owning 261 million kyat ($200,000) of stocks as of Oct. 8 — mostly in First Myanmar Investment Co. Ltd. and Myanmar Thilawa SEZ Holdings Public Ltd. The exchange on Monday said it halted trading due to a connection error.

The military’s action will present an early foreign-policy test for U.S. President Joe Biden. The U.S. has become increasingly critical of Myanmar in the past few years under Donald Trump’s administration, imposing targeting visa restrictions and financial sanctions in 2017.

“It’s very clear the Biden administration represents a stark break from the previous government on human rights,” said Graeme Smith, a fellow at the Australian National University’s Department of Pacific Affairs. “Whatever government is in power — Aung San Suu Kyi or the military — they will face more pressure on human rights than Trump, who probably wouldn’t have cared either way.”

China is Myanmar’s largest trading partner, accounting for about a third of total commerce in 2019 — about 10 times more than the U.S. Myanmar has also received support from the International Monetary Fund, which last month approved about $350 million in assistance to address the Covid-19 pandemic.

In November’s election, Suu Kyi’s NLD won 396 seats in the national assembly, more than the 322 needed to form a government. Turnout was an estimated 70% of the nation’s 37.3 million people eligible to vote. The ruling party has also won 524 seats in elections held to state and regional parliaments, official data showed.