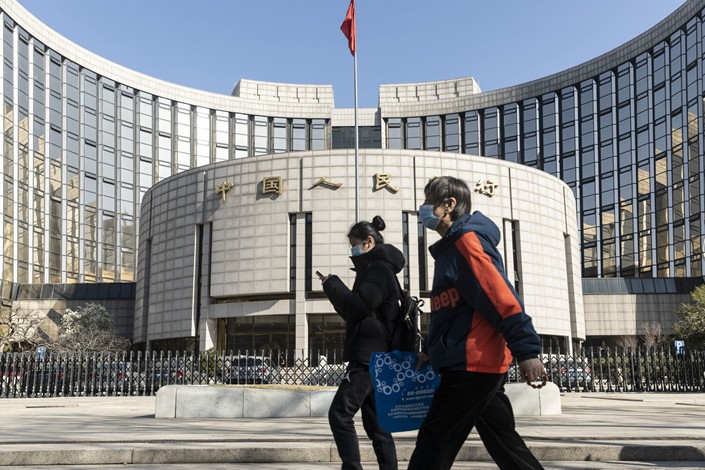 Pedestrians walk past the People’s Bank of China building in Beijing on March 17. Photo: Bloomberg

(Bloomberg) — China drained funds from the financial system on Wednesday, a sign that officials remain wary of excess liquidity.

The People’s Bank of China (PBOC) offered just 100 billion yuan ($15 billion) of short-term cash, according to traders, even as 180 billion yuan of seven-day funds mature Wednesday. Another 380 billion yuan comes due before the Lunar New Year holiday starts next week.

The PBOC drained cash from the system last week, sending a gauge of overnight interbank borrowing costs soaring. That move caused investor concern that the authorities were driving up money market rates to tighten monetary policy given frenzied speculation in housing, stocks and commodities.

Adding to investor worries is the banking system’s mounting demand for funding due to the holiday period, which starts Feb. 11. That’s because people across the country will spend heavily on gifts and travel, even though celebrations will be muted due to the virus pandemic. The PBOC needs to provide more than 1.5 trillion yuan of liquidity to stabilize money markets around the break, according to a Bloomberg Intelligence report by strategists including Stephen Chiu.

The overnight repo rate has retreated for two sessions, ending Tuesday at about 2.23%, the lowest in two weeks. It soared to 3.33% last week.

Some market watchers expect medium-term lending facility loans to be offered before the week-long holiday starts, even though that tool is usually used around the 15th of every month. Some 200 billion yuan of MLF matures on Feb. 18.