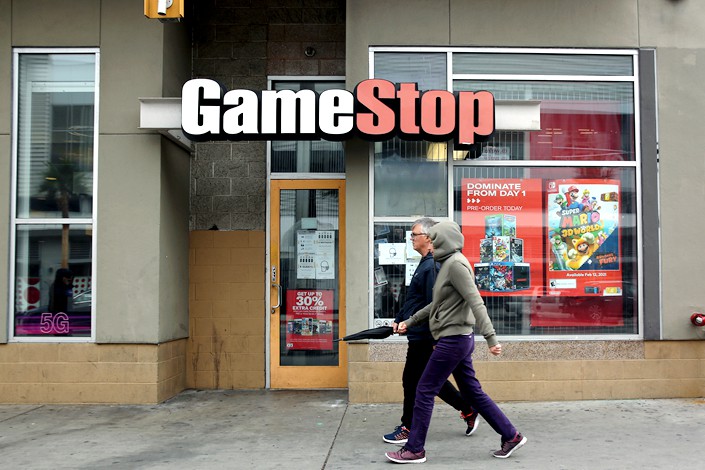 A GameStop store in Los Angeles on Jan. 27. Photo: VCG

Speculative fervor comes in different flavors that has punctuated financial markets over history. The feverish tug of war playing out in real-time over GameStop Corp. — a typical brick and mortar gaming retailer — makes the Bitcoin rally seem dull by comparison and over the past week has transfixed investors across the globe. An army of retail traders has locked horns in a match of financial jiu-jitsu against institutional financiers, where for once, the little guy seems to hold the upper hand.

The GameStop drama typifies a classic short squeeze that usually ends abruptly and in tears. And when it does, like all other periods of market exuberance, will impart lessons on all involved. Amidst the unfolding high-stakes drama, what is the larger significance of the GameStop saga?

The GameStop saga is riveting, for it weaves together multiple storylines that ripple far beyond New York to markets around the world, putting regulators in other jurisdictions on notice. While the story may soon reach its finality, GameStop may turn out to be the opening salvo of a broader chess game between retail and institutional traders.

GameStop’s meteoric rise to almost $500 a share seems to defy the laws of physics. At play are short positions by hedge funds that sold shares they do not own, with the goal of buying them cheaper at a later date, thus pocketing a gain. This trading strategy is under attack by an onslaught of retail investors taking the opposite bet — long positions, hoping the stock price will rise. Traders that banded together on Reddit — a news aggregator and social media platform — have entered into call options (a derivative instrument), anticipating that GameStop’s price will trend upwards.

As GameStop stock surged, hedge funds suffered an unprecedented squeeze. These institutional fund managers have two choices — either close out their short positions, thereby realizing a loss or continue to ride out the short squeeze by putting up more money on the table, funding their trades with additional cash or collateral, hoping that the bet will soon go their way. Usually, the feedback loop is straightforward — as the stock moves up, short sellers capitulate, they buy more stock and those purchases induce upward pressure on the stock price.

But if the gamble goes awry, and it has up to this point, the pain will be even more acute.

In hindsight, some funds should have closed out their shorts at the beginning of the week, keeping their losses manageable without interfering with the fund as an ongoing concern. Now the hurt has grown exponentially to the extent that some hedge funds have required a capital infusion from larger institutional players. It is conceivable that in the battle between the longs vs. shorts, some hedge funds could go out of business.

Industry heavyweights Ken Griffin and Steve Cohen have come to the rescue by injecting $2.75 billion into Melvin Capital after the firm lost about 30% this year. The capital injection comes after Melvin Capital, saw short positions, including GameStop go astray.

Amidst the tumult, some hedge fund managers have aired their grievances in public against the Reddit crowd for attacking wealthy people. Apparently, these retail traders didn’t get the memo that nothing is supposed to come between the “Masters of the Universe” — a term from Tom Wolfe’s novel Bonfire of the Vanities about Wall Street excesses — and their money. In the Roman Coliseum that is Wall Street everyone is fair game. The hypocrisy has not gone unnoticed.

The electronic herd on Reddit, though not a monolithic block by any means, tend to skew younger. By and large, they represent an anti-establishment, populist sentiment, representing part a broader ongoing debate between the haves and the have nots. Like crowdfunding, the power of individuals become amplified when bunched together, especially when armed with powerful derivative tools loaded with financial leverage. In online chatrooms, the din of ordinary folks pulling for the little guy vs. Wall Street is almost audible.

Robinhood, a trading portal for retail investors has been getting raked over the coals by its customers and lawmakers in Washington for restricting trading in the highflying stock, forcing Vlad Tenev the company’s CEO to make an obligatory round of interviews on financial news programs. His comments about financial stress on his firm due to capital obligations and clearing house deposits seemed muted and unconvincing. By imposing trading curbs, was it acting as a good Samaritan – protecting its customers or saving its own skin? Similar limits on retail speculation were also taken by Interactive Brokers and TD Ameritrade.

As an actor in the unfolding drama, Robinhood represents a fascinating storyline of its own, for it underscores the role of fintech in enabling speculative fervor. Financial technology has been a boon to legions of individuals hungering for greater control over their investments. Over the years, it has evolved from portals that provide basic functionality for buying and selling stocks to offering a full suite of institutional-like tools, that were previously the exclusive domain of professional investors like asset managers and investment banks.

Here in China, fintech is synonymous with mobile payments linked to the Alibaba and Tencent ecosystems. But in the U.S. which lags China in mobile payments, fintech is associated with platforms that enable individual investing and wealth management. Over the years, fintech has democratized investing and brought powerful tools to the masses including advanced analytics, automated trade rebalancing, portfolio optimization. robo-advising and scenario analysis.

Today, fintech has reached an inflection point, allowing investors worldwide to do just as well if not better than a professional money manager who is often saddled with restrictions as to what he can or cannot invest in. Retail investors are not subject to such constraints and as fintech has moved up the investing value chain, providing robust features and functionality, individuals have at their disposal an arsenal of technology to compete head-to-head with Wall Street’s titans.

Another equally fascinating storyline are the legions Chinese investors who have been watching the saga play out from the sidelines. Could the euphoria surrounding GameStop occur in China? It is highly unlikely given that China’s financial markets are tightly regulated, allowing for minimal short-selling.

“To short a stock, you have to ask your broker to borrow the shares and then short it, plus there is a list in China for the few stocks that can be shorted. If a stock like GameStop were on the list, as soon as people started taking short positions, it would immediately come off, preventing individuals from placing additional bets,” according to Bob Olivar, CEO of Overseas Capital Management in Shanghai. Limits on downward pressure and upward price movements also provide additional guardrails. Although the GameStop saga is playing out an ocean away, China’s young traders have been glued to their screens itching to participate in the market euphoria overseas.

As China’s financial sector continues to modernize, greater focus will be directed at the role of financial product innovation — including the role of derivatives, leverage, margin lending, short selling and other types of financial alchemy – who can use it, how and under what scenarios. Equally important will be the enabling technology — fintech — that has the ability to even the playing field and even blur the line between individual and institutional investors. At best, fintech is an equalizer, empowering people to control their financial destiny. At worst, it has the power to cause market disruptions that dislocate many players.