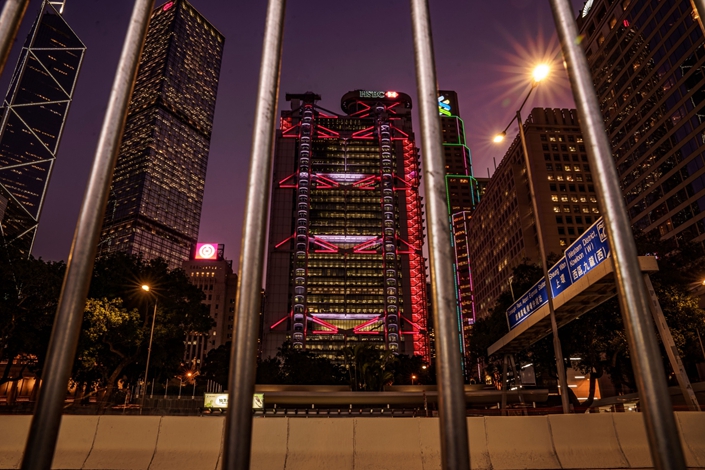 HSBC’s headquarters lights up the night in Hong Kong on Jan. 25. Photo: Bloomberg

(Bloomberg) — HSBC Holdings Plc is considering relocating a handful of senior executives from London to Hong Kong or Singapore as Europe’s largest lender bets its future on Asia.

The bank is mulling moving London-based Greg Guyett and Georges Elhedery, the co-heads of its investment bank, to Asia, people familiar said, declining to be identified as the details are private. Other direct reports to CEO Noel Quinn are also being considered for relocations, placing more top decision makers in the region where it makes the bulk of its money, the people said. The moves are being considered as HSBC prepares to announce the outcome of a strategic review this month.

HSBC is planning to shift billions in capital to Asia, in particular to China, to reignite profitability as it scales back or exits businesses in Europe and the U.S. where less economic momentum and rock-bottom interest rates has made it difficult to make money. Having more executives in the region will show investors and policymakers that it’s serious about its expansion plans, at a time when an occasionally tense relationship with Beijing is on the mend.

HSBC is almost a year into a major restructuring that was partially held back by the pandemic outbreak and is expected to update its plans alongside full-year results on Feb. 23.

The lender this week announced the opening a new office in South China’s Guangdong province to steer a push into the Greater Bay Area, a Beijing-backed project to tie Hong Kong closer to southern Chinese mainland cities such as the tech-hub Shenzhen and create an economic powerhouse of a region with more than 72 million people. The London-based bank makes about two-thirds of its pretax income in Hong Kong, but is still relatively small on the mainland even though it has outlets across more than 50 cities.

Hong Kong leader Carrie Lam has endorsed a stronger presence for the bank in the former British colony, where it has come under heavy criticism for freezing accounts of pro-democracy activists and backing a sweeping national security law imposed on the financial hub. It has also received praise over its expansion plans from Communist Party-backed media, after earlier having to defend itself over its cooperation with the U.S. probe into Huawei Technologies Co. Ltd.

HSBC has also been seeking to deploy more resources in Southeast Asia, where it has been struggling to compete with dominant players such as Singapore’s DBS Group Holdings Ltd. and rival Standard Chartered Plc. HSBC also recently announced it would expand into private banking into Thailand.

Along with its rivals, HSBC is also poised to benefit from increased trade flows after 15 Asia-Pacific nations agreed to lower tariffs in the Regional Comprehensive Economic Partnership signed in late 2020.

“Economic realities mean that what we were planning to do in February we need to be even more urgent in doing,” Chairman Mark Tucker said at the virtual Asian Financial Forum in January. “We are accelerating the plan by confirming areas of focus for the bank, especially in Asia where we see real opportunities to grow our wealth business and expand across South Asia,” he said.

Tucker’s contract is up for renewal ahead of HSBC’s annual general meeting.