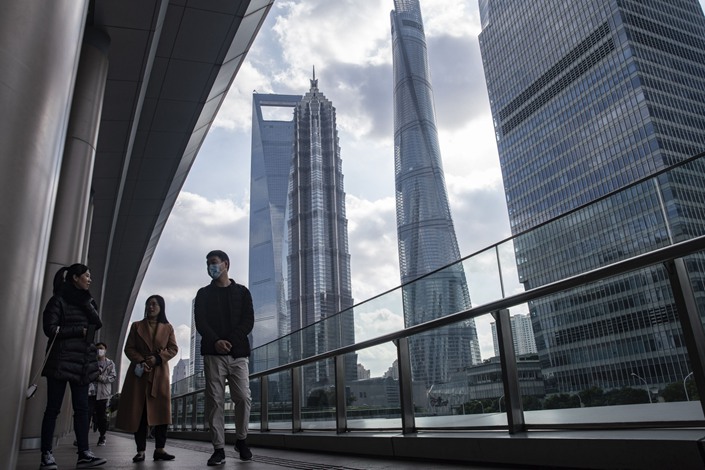 Pedestrians walk through the Lujiazui financial district in Shanghai on Dec. 1. Photo: Bloomberg

The nearly 15,000 funds offered by Chinese managers returned 30% on average last year, with the best-performers surging 10-fold, according to Shenzhen PaiPaiWang Investment & Management Co. That dwarfs the average 12% gain for hedge funds globally.

The outperformance is another impediment to global funds such as Bridgewater Associates and Two Sigma, which have struggled to make inroads into China’s 3.8 trillion yuan ($588 billion) hedge fund market since it was opened to foreign firms four years ago. Local funds added a record 1.3 trillion yuan in assets last year.

“Foreign players are handicapped in China,” said Yan Hong, director of the China Hedge Fund Research Center at the Shanghai Advanced Institute of Finance. While many global funds are “patient” given the potential riches of cracking the Chinese market, their persistently small size adds to regulatory constraints, “making it hard for them to distinguish themselves.”

China’s early economic recovery from the pandemic fueled rallies in stocks and commodities, lifting returns across all eight hedge fund strategies tracked by PaiPaiWang. Macro funds, which trade across asset classes, were the best-performer, returning an average 41%, compared with the global average of 10%.

Shenzhen Qianhai Jianhong Times Asset Management added leveraged bets on stocks seen to benefit from the pandemic, such as glove makers and office supply companies shortly after the outbreak, then later made early dives into consumer stocks and vaccine-makers as growth started to stabilize, according to China Times. Its Jianhong Absolute Return No. 1 fund ended the year with a 831% return, the best among stock funds, according to PaiPaiWang.

Only three of the 32 foreign firms that have won a license to operate in China’s hedge fund market — UBS Group AG, D.E. Shaw & Co. and Winton Group Ltd. — have garnered more than 2 billion yuan at their onshore private fund businesses — a key condition to be allowed to access the interbank bond market that’s crucial for bond and macro strategies, according to Yan.

The lack of scale also hampers foreign funds’ access to markets such as over-the-counter options because they can’t meet Chinese brokerages’ requirements for assets under management, according to Fangda Partners.

Meantime, the number of local hedge fund firms with at least 10 billion yuan in assets more than doubled last year to 63, according to Licai.com. Growth is most impressive among quant funds, with the four biggest tripling assets last year, according to Chinafund.

“Money is increasingly gravitating toward the biggest players, with the top 10% soaking up most of the inflows,” said Liu Ke, head of research at Hengtian Wealth Management. “The trend is accelerating.”

While some foreign quant firms are attracting strong inflows with offshore products that invest in China, they are struggling to win recognition onshore as the under-performance of their fundamental-driven strategies last year further erodes the appeal of their already short track-records, according to Qiu Huiming, founder of Shanghai Minghong Investment Management Co. Ltd.

“Although foreign managers have stronger name recognition globally, the past two years showed that Chinese quant players still have the edge so far,” he said.

Still, “it’s not a game where success is determined in the short-term,” Yan said. “As policies loosen further, foreign players’ advantages could gradually emerge.”