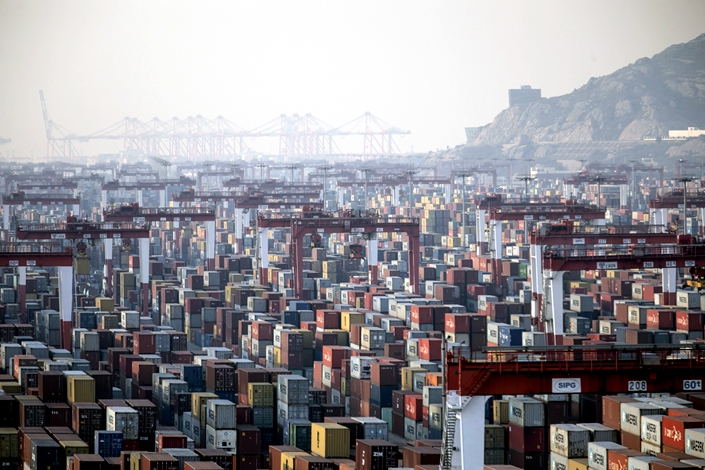 Shipping containers next to gantry cranes at the Yangshan Deepwater Port in Shanghai on Jan. 11. Photo: Bloomberg

(Bloomberg) — American companies would lose hundreds of billions of dollars if they slashed investment in China or the nations increased tariffs, the U.S. Chamber of Commerce said in a report highlighting the cost of a full decoupling of the world’s largest economies.

American gross domestic product would see a one-time loss of as much as $500 billion should U.S. companies reduce foreign direct investment in China by half, the Washington-based business lobbying group said in a report on Wednesday. Applying a 25% tariff on all two-way trade would trim U.S. GDP by $190 billion annually by 2025, the group said in a joint study with Rhodium Group, a New York data and analytics firm.

The analysis highlights the costs of different policies as the Biden administration weighs the best strategy for facing challenges posed by China. The chamber said that the U.S. should work with allies to confront China on its state-led economic model and national security concerns rather than acting unilaterally, and without undermining U.S. productivity and innovation.

A “balanced and rational approach” to commercial relations with China is in the interests of both the U.S. and the American business community, the chamber said. At the same time, the group said that it’s in favor of a “rules-based” economic order and against Chinese practices that are unfair to American companies.

The U.S. and China fought a trade war under President Donald Trump that continues to see tariffs applied on about $335 billion of Chinese goods annually, according to the calculations by Chad Bown at the Peterson Institute for International Economics. That’s despite a phase-one agreement reached in 2020, where China promised to purchase more American products. Beijing missed its 2020 trade-deal targets as the global pandemic upended shipping and supply chains.

Under the pact, the Asian nation pledged to buy an extra $200 billion in U.S. agriculture, energy and manufactured products over the 2017 level in the two years through the end of 2021.

The deal also didn’t fully address some of the biggest grievances of American companies, such as China’s theft of intellectual property, forced technology transfer and subsidies for domestic industries.

In addition to reduced goods exports, the study estimated that if future Chinese and tourism and education spending were reduced by half from pre-pandemic levels, the U.S. would lose $15 billion to $30 billion per year in services trade exports. A decoupling would hurt spending on research and development in the U.S. that supports China operations, though this impact is harder to quantify, the chamber said.

The chamber’s report also studied the potential decoupling impact on four industries. It found that losing access to China’s semiconductor market would cause $54 billion to $124 billion in lost output and put 100,000 U.S. jobs at risk. The imposition of tariffs could result in as much as $38 billion in output losses and nearly 100,000 jobs in the chemicals industry.

Losing access to China’s market for U.S. aircraft and commercial aviation services could cost $51 billion annually in output, or $875 billion cumulatively by 2038. Lost market share in medical devices would result in $23.6 billion in annual revenue, the chamber said.