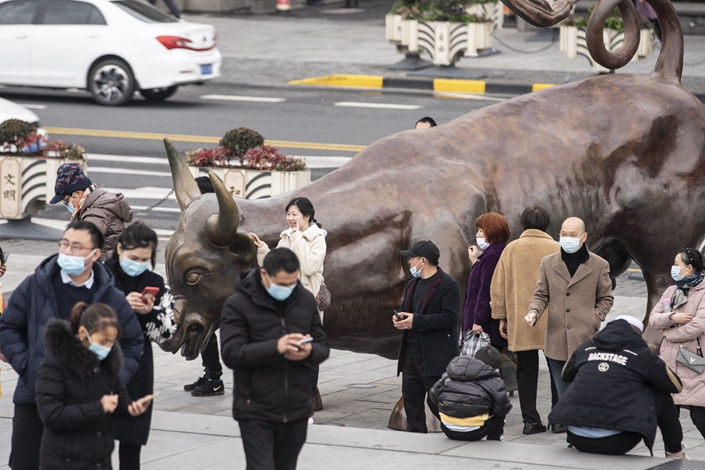 A woman poses for a photograph Friday alongside the Bund Bull in Shanghai. Photo: Bloomberg

(Bloomberg) — Chinese stocks jumped after reopening for the first time after the Lunar New Year break on Thursday, poised to close at a new record high.

The CSI 300 rose 2% to 5,922.07 points, taking it above its 2007 closing peak. During the break, Chinese stocks listed in Hong Kong gained 3.5% since onshore markets last traded, while the offshore yuan has been steady after hitting its strongest level versus the greenback in 32 months this week.

Even though the Chinese equity benchmark is trading at its highest valuation in nearly six years, traders remain bullish about the market, driven by strong corporate earnings, ample cash in China’s financial system and low borrowing costs. Thursday’s reopening amid the pandemic recovery is a stark contrast to 2020, when Chinese markets plunged by the most value on record after an extended Lunar New Year break.

“The market will stay bullish,” said Kingston Lin, managing director of the asset management department at Canfield Securities in Hong Kong. “The only matter is how much it will rise.”

Traders had bid the CSI 300 Index up to 13-year highs in January, but momentum cooled as investors shifted a record level of money into Hong Kong stocks as domestic prices surged. The city’s $7.8 trillion equity market should also benefit from the reopening of trading links with the mainland, after an influx of mainland cash helped propel a world-beating rally for the Hang Seng Index.

The People’s Bank of China offered 200 billion yuan ($31 billion) of one-year liquidity with its medium-term lending facility, according to a statement. That helped offset the loans that mature this month. It kept the interest rate on the funds unchanged at 2.95%.

How China’s central bank balances support for an uneven economic recovery without fueling excessive speculation is a key driver of investor sentiment. Traders were rattled by January’s liquidity squeeze when the PBOC withdrew cash from the financial system for the first time in six months, but authorities have drip-fed funding since then to calm money markets and suppress interest rates.

While there are signs China’s economic recovery from the pandemic remains unbalanced, it is outpacing the rest of the world, having roared back to pre-pandemic growth rates in the fourth quarter.

“We’re all talking about the global pandemic recovery but the speed of recovery in China has been faster than any other country,” said Steven Leung, executive director at UOB Kay Hian (Hong Kong) Ltd. “While there are still sufficient funds in the market, more foreign investors will continue eyeing Chinese markets.”