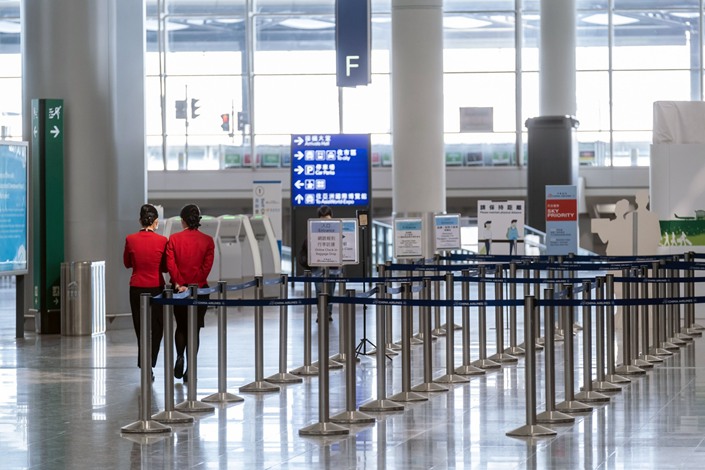 (Bloomberg) — Cathay Pacific Airways Ltd. is being forced to take extreme measures to cope with new rules in Hong Kong that require flight crew to quarantine from Saturday, introducing a rotation policy that will put staff out of action for almost one month at a time after they’ve completed 21-day shifts.

Crew who volunteer to take part in the airline’s so-called closed loop plan must isolate at Cathay’s Headland Hotel whenever they return to Hong Kong during their 21-day duty cycle. Once the three-week shift is over, they’ll need to self-isolate for 14 days in a hotel in Taikoo Shing on Hong Kong Island. Then they’ll get 14 days off, bringing the full duty cycle to 49 days.

Cathay has said the requirement for crew to quarantine could add as much as HK$400 million ($52 million) to its monthly cash burn, which is already as high as HK$1.5 billion due to an unprecedented slump in demand for air travel. The new measures, which come after Hong Kong extended the mandatory quarantine period for people arriving in the city, are aimed at shoring up the border, even as new daily coronavirus cases ease to low double digits and authorities relax some social-distancing rules.

“As long as stringent quarantine measures continue to be in place in Hong Kong and elsewhere, the coming months will be extremely challenging,” Cathay’s Chief Customer and Commercial Officer Ronald Lam said in a statement Wednesday.

Cathay flew just 30,410 passengers last month, an average of 981 a day — the first sub-1,000 reading since June. Passenger load factor was 13.3%, a record low. The airline is particularly exposed to the pandemic as it has no home market to serve while international routes are largely off-limits.

Under the new shift cycle, crew will need to take Covid-19 tests every time they arrive in Hong Kong, and they may be subjected to more when arriving in countries such as Australia, which also has strict border measures in place, a Cathay spokesperson wrote in an email to Bloomberg News. Enough staff have volunteered to take part in the program, the spokesperson said, without disclosing numbers. They’ll undergo medical surveillance for seven days after the 14-day hotel quarantine period.

There are some exemptions to the new quarantine restrictions, according to an internal Cathay memo seen by Bloomberg News. They include flights to and from the Chinese mainland, Taiwan and Macau, some flights with a layover in Anchorage, Alaska, and so-called turnaround flights where crew don’t leave the aircraft and no passengers are on board returning to Hong Kong.

The memo warned that some crew might be required to sign up for all or part of a second 49-day cycle, because it is unknown how long Hong Kong’s quarantine requirements for flight crew will stay in place. Volunteers on Boeing Co. 747s will operate a combination of Europe, Middle East, India and U.S. routes, while those on Boeing 777s and Airbus SE planes will fly mostly cargo-only to long haul destinations, as well as passenger flights.

Pilots who don’t volunteer for the closed loop plan will likely mostly operate turnaround cargo flights within single flight duty periods, according to the memo. Some of these flights will require more crew as duty periods may be extended on account of in-flight rest.

While its outbreak pales in comparison to those in the U.S. and parts of Europe, Hong Kong has struggled with resurgences, resulting in various tweaks to its Covid approach. Schools remain essentially closed and authorities have deployed flash lockdowns to test residents en masse in apartment blocks or parts of the city when cases emerge. The requirement for arrivals to self-isolate in a hotel for 21 days is stricter than places such as Australia and New Zealand, which have also taken a zero-tolerance approach to contain the virus.