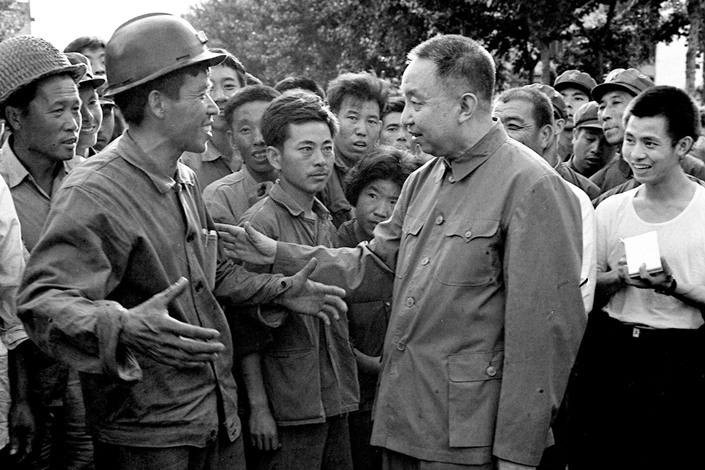 Zhu Huaxin is an executive council member and director of internet and new economy studies at China Society of Economic Reform, a national institute established in 1983 with a focus on China’s economic system reform. The article, edited for length and clarity, was first published in Chinese by Caixin.

On Oct. 6, 1976, Hua, Ye Jianying and other comrades, on behalf of the Politburo, carried out the will of the Communist Party of China (CPC) and the people and took decisive measures to crush the Gang of Four, according to an article titled “Life of Comrade Hua Guofeng” published by the People’s Daily on Sept. 1, 2008.

This move saved the party and saved the socialist cause. The party and the development of the national cause turned a new page, stated the CPC Central Committee’s Party History Research Office in a piece published by the People’s Daily on Feb. 19, 2011.

At that time, the Cultural Revolution had been going on for 10 years, and the Gang of Four had a great advantage in the ideological and organizational system. Hua and his colleagues’ actions could have been reversed by the Gang of Four forces if they were not careful. However, Hua showed a strong sense of historical justice against the backdrop of millions of people denouncing the Gang of Four while mourning Premier Zhou Enlai in Tiananmen Square after his death in January 1976.

The Cultural Revolution was wrongly started by the leaders and exploited by counter-revolutionary groups, bringing serious disasters to the party, the country and the people of all nationalities, according to the “Resolution on Certain Historical Problems of the Party since the Founding of the People’s Republic,” adopted by the Sixth Plenary Session of the 11th Central Committee of the Communist Party of China in 1981.

The Gang of Four, led by Jiang Qing, rose to power during the Cultural Revolution, with a tendency toward agrarian socialism in its economic ideology and in favor of strict laws in its political philosophy.

During the Cultural Revolution, an entire generation made irreparable sacrifices for the sake of an illusory ideological utopia. Starting in 1957, salaries were frozen and bonuses were abolished for employees of enterprises and institutions nationwide. It was not until 1977, when Hua was in charge, that the nation’s first general salary adjustment was made, with a maximum raise of 7 yuan per person.

Speaking at the conference celebrating the 40th anniversary of reform and opening-up on Dec. 18, 2018, General Secretary Xi Jinping pointed out that “the world economy was developing rapidly, and scientific and technological developments were happening constantly, but the 10 year chaos of the Cultural Revolution took our country’s economy to the brink of collapse, and basic subsistence had become a problem.”

In 1976, at the age of 55, Hua stood on the right side of history, responding to the call of millions of people in Tiananmen Square, allied with Ye Jianying (叶剑英) and other veteran cadres, using his position as first vice chairman of the Central Committee and Premier of the State Council to end the people’s 10 year nightmare — he is rightly regarded as a hero.

Hua Guofeng’s thought was left-leaning. Particularly, the “Two Whatevers (两个凡是),” which refers to the statement that “We will resolutely uphold whatever policy decisions Chairman Mao made, and unswervingly follow whatever instructions Chairman Mao gave.” This statement was contained in a joint editorial, entitled “Study the Documents Well and Grasp the Key Link,” printed on Feb. 7, 1977, in the People’s Daily, the journal Red Flag and the PLA Daily.

These “Two Whatevers” drew serious criticism in the discussion of the standard of truth in 1978. Hua can hardly be blamed. The 1981 Resolution concluded that “It is obvious that it is impossible for [Hua] to lead the correction of the left-leaning mistakes in the party, especially the restoration of the party’s fine traditions.”

However, the party also talked about some personal highlights of Hua’s leadership. Lin Xi (林晰), former director of the People’s Daily’s business and industry news section, remembered that at an executive meeting of the State Council held at the State Planning Commission in Beijing, Hua once said, “Comrades, let’s discuss one thing with you, please don’t call me ‘wise leader (英明领袖)’ anymore.” The then Vice Premier Wang Zhen (王震) stood up and said, “I checked the dictionary, ‘wise’ means bright leader, I think it’s OK!”

During the Cultural Revolution, Mao Zedong personally picked Hua as the deputy director of the Hunan Provincial Revolutionary Committee and the first party secretary of the Hunan provincial party committee. In 1971, he joined Li Xiannian (李先念) and others to convene a meeting at the State Council to criticize the anarchy that seriously interfered with production and construction during the Cultural Revolution. Mao Zedong once criticized Hua in 1971: “You only care about production.”

After the arrest of the Gang of Four, Hua Guofeng wisely took over Zhou Enlai’s slogan of “Four Modernizations (四个现代化)” and resolutely announced at the 11th Party Congress in 1977 to end the unpopular “Cultural Revolution.”

For example, he quietly released the people arrested in the 1976 Tiananmen Incident and lifted the ban on some pre-Cultural Revolution literary works. He hoped to establish his dual-identity under the banners of modernization and continuing revolution — in line with both orthodoxy and public opinion, and to pursue a left-leaning line that eliminated some of the extremely perverse practices of the Gang of Four — so that he could gain the legitimacy to govern amidst all the rhetoric inside and outside the party after the Cultural Revolution.

However, his values and political philosophy were shaped by the left-leaning thinking that had prevailed in the party for many years, and it was difficult to change course for a while.

When the news that peasants in Anhui province and other places had spontaneously started “household responsibility system (包产到户)” reached Beijing, Hua stressed at a meeting that the collective economy was still superior, but also said the government should allow flexibility, according to an autobiography of Du Runsheng (杜润生), an economist hailed as China’s father of rural reform.

Hua also had no issue with agreeing to disagree. Hu Jiwei (胡绩伟), former president of the People’s Daily, recalled in his autobiography that “Hua was able to tolerate different opinions, go with the flow of the history, and take care of the big picture; and did not crack down, suppress ... dissident forces.”

Did Hua’s approach to political affairs also contain elements of intraparty democracy? This was certainly related to his politically vulnerable position at the time, but Hua’s character of generosity and tolerance is thus evident.