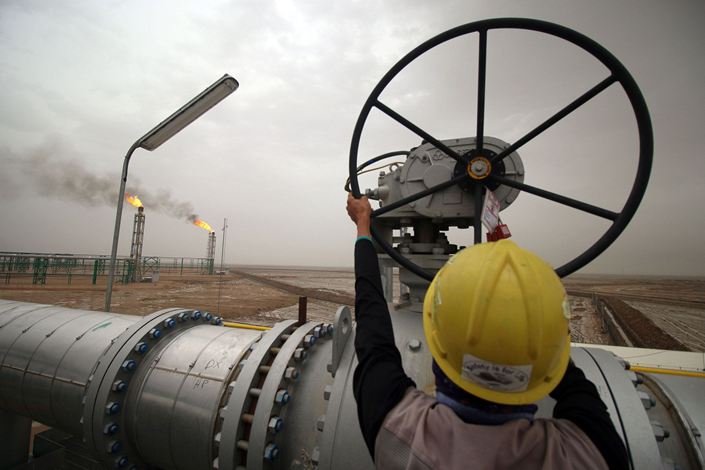 An employee turns a valve at the Zubair oil and gas field, north of the southern Iraqi province of Basra. Photo: Bloomberg

(Bloomberg) — Iraq has decided against signing an oil-supply deal with a Chinese state company that would’ve seen the cash-strapped Arab nation get about $2 billion upfront.

The contract has been “deferred until further notice,” Finance Minister Ali Allawi said in an interview, without giving more details.

Iraq, whose economy is reeling after last year’s crash in crude prices, in November asked oil traders to bid for a five-year supply deal. Baghdad proposed delivering 4 million barrels a month, or about 130,000 a day, with the buyer paying upfront for one year of supply.

Prepayment deals are rare in the oil world and this was meant to improve Iraq’s financial situation. While the government is still struggling, its position has improved because oil prices have soared 65% since the start of November to around $64 a barrel, largely thanks to the roll-out of coronavirus vaccines.

OPEC’s second-biggest producer had wanted as much liquidity as possible in January and February this year and was concerned that oil prices wouldn’t exceed $40 a barrel, Jabbar said in his interview.

After prices stabilized, “we decided to freeze this attempt or option and we didn’t activate it,” BBC Arabic cited him as saying.

In an interview with the Iraq Oil Report earlier this month, Allawi said pre-payment oil deals were problematic because they required a sovereign guarantee.