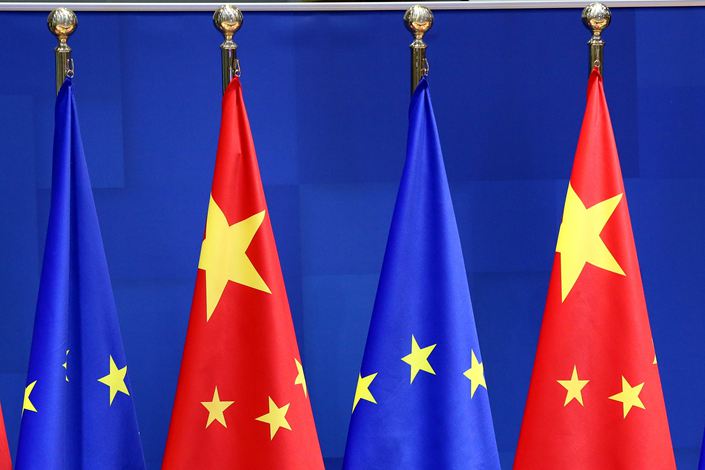 At the end of last year, the European Union and China concluded a long-negotiated investment agreement. Photo: VCG

No sooner had the European Union concluded a long-negotiated investment agreement with China late last year than criticism poured in. Some concerns are well-founded. Europe is taking a risk by moving ahead when the United States and Europe have yet to devise a unified approach to Beijing.

For China it is clearly a smart move. But the deal, known as the Comprehensive Agreement on Investment (CAI), can pave the way to a more structured engagement and agreed upon rules between China and the rest of the world, especially if it leads to broader cooperation under the umbrella of the World Trade Organization (WTO).

The closing of the deal on Dec. 30, three weeks before President Joe Biden took office, generated some discomfort in the Biden camp. In going forward, the European Union has to improve its signaling on working together. The United States, in turn, has some work to do to rebuild trust with Europe.

To manage the economic relationship with China, both need to recognize that the WTO can help. The recent U.S. endorsement of Ngozi Okonjo-Iweala as the next director-general of the organization is an excellent start.

The CAI is not a free trade agreement nor a bilateral investment treaty. Sabine Weyand, the director-general for trade for the European Commission, in a recent episode of Trade Winds, portrayed it as a “sui generis” investment deal that binds China and the European Union to their current levels of market openness for investments and prevents potential rollbacks, with some fresh openings in other sectors.

Investors from all countries will benefit from China’s commitments on services, as they will apply on a most-favored nation basis. The annexes to the CAI are yet to be published, so it is not clear whether its sectoral coverage is substantial enough to comply with the WTO rules on services.

The CAI aims to shield investors in China from forced technology transfers. For domestic subsidies, China is obligated to provide more information on government support programs, including subsidies for services. But the agreement fails to update the WTO definition of subsidies, and subsidies are not actionable under the CAI’s dispute settlement mechanism.

In disciplining the behavior of state-owned enterprises, the agreement improves on the definition of covered entities, which are required to act in accordance with commercial considerations and avoid discriminating against EU investors in their purchases and sales of goods and services.

A section on sustainable development commits China to implementing the Paris Agreement and to continuous and sustained efforts to ratify the remaining International Labor Organization conventions on forced labor that it has not yet approved, a weakness in the eyes of prominent members of the European Parliament concerned about forced labor and human rights violations in China. The CAI also contains an agenda for future negotiations on investment protection and an investment dispute settlement mechanism. Until then, the 25 bilateral investment agreements between individual EU member states and China will continue to apply.

As in the U.S.-China phase one deal of early 2020, China commits in the CAI to some degree of strengthening of current WTO rules. Wendy Cutler, vice president for the Asia Society Policy Institute, pointed out in the earlier mentioned episode of Trade Winds that both deals move the needle relative to China’s WTO accession commitments of 2001. But the CAI also leaves the key topic of industrial subsidies unresolved. Updating the WTO rulebook is the way to go, as Weyand said in the latest episode of the podcast Trade Talks.

Next steps for the U.S., Europe

The CAI must still get the approval of the European Council and the European Parliament after its expected signature in 2022. The European Union is betting on it as an incremental approach to engagement with China, underpinned by provisions on transparency, consultations, and working groups, and a state-to-state dispute settlement mechanism. At a time when some in the United States are calling for a “decoupling” between China and advanced countries, Europe has signaled a different path forward. But implementation will be challenging, and the European Union, for all its strengthened toolbox, will not be able to go down that path alone. Moreover, in opting for greater economic integration with China, Europe risks getting entangled in the power politics that can accompany deeper relations with Beijing.

Going forward, the Biden administration should work with other countries in the WTO to engage with China. To assuage fears in Washington, the European Union proposed a new agenda for cooperation, also in December. But both sides of the Atlantic have work to do to develop a cogent strategy. The US support for Ngozi Okonjo-Iweala for the post of WTO director-general is a welcome first step; in the case of Europe, rescinding its ill-advised regulations to curb exports of vaccines is a key signal that it is recommitting to multilateralism.

A next step for both would be to reach out to other countries and launch an initiative to address the problem of subsidies in the next WTO ministerial conference and to restore a functional dispute settlement mechanism at the WTO. The CAI’s greatest contribution could be a revival of global economic cooperation.

The article was first published on PIIE website on Feb. 10, five days before Ngozi Okonjo-Iweala became director-general of the WTO.