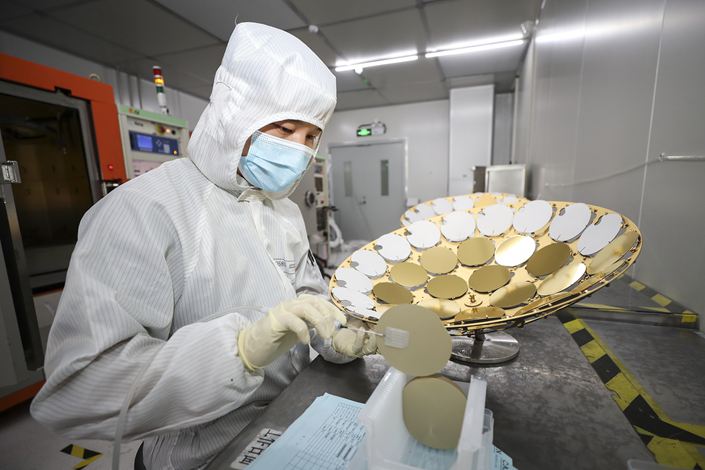 (Bloomberg) — U.S. Senate Majority Leader Chuck Schumer said he is asking the chamber’s top Republicans and Democrats to draw up legislation aimed at improving U.S. competitiveness with China in manufacturing and technology, including bolstering the supply of American-made semiconductors.

The outline Schumer set down Tuesday calls for emergency funding for programs included in a recent defense-policy bill that authorized federal incentives to promote semiconductor manufacturing and research in the U.S., but provided no money for the grants and tax credits lawmakers say is necessary to attract investment. The issue has taken on new urgency with a global chip shortage that’s forced some U.S. carmakers to idle plants and that threatens to spread to the electronics industry.

“Right now semiconductor manufacturing is a dangerous weak spot in our economy and in our national security,” Schumer said at a news conference at the Capitol. “That has to change. We cannot rely on foreign processors.”

The announcement comes a day before U.S. President Joe Biden is scheduled to meet with a group of lawmakers from both parties at the White House to discuss the semiconductor shortage, according to two people familiar with the matter.

The meeting is expected to accompany Biden’s signing of an executive order aimed at strengthening supply chains for microchips and other vital products, one of the people said. The review is expected to take several months, before recommendations are issued.

The U.S. still leads the world in chip design, but manufacturing has largely been ceded to foreign firms. The supply-chain executive order and any funding Congress approves for semiconductor manufacturing won’t have much effect on the immediate shortage. That will require leaning on producers in Taiwan and elsewhere overseas to allocate supply to U.S. electronics-makers.

Schumer’s plan also listed possible sanctions or other steps directed at trade with China and concerns about intellectual-property theft. It would aim to encourage allied approached toward China, as seen in recent years with U.S. and U.K. efforts to redline China’s telecoms giant Huawei Technologies Co. Ltd.

“All of these have bipartisan support,” Schumer said. “I want this bill to address American’s short-term and long-term plan to protect the semiconductor supply chain and keep us No. 1 in things like AI, 5G.”

Schumer said he hopes to have the legislation on the Senate floor for a vote this spring. The tough-on-China approach to boosting U.S. supply chains and manufacturing is also one way that senators could open the door to bipartisan talks on a robust infrastructure bill that Biden says will be his priority once the $1.9 trillion pandemic-relief package clears Congress.

Democrats need at least 10 Senate Republicans to join them on an infrastructure bill if they want to avoid using the budget-reconciliation process. That fast-track procedure, which Democrats are using for the relief bill, would likely involve cutting critical elements of the legislation, because they’d probably not qualify as largely fiscal measures.

Democrats say they are hopeful they can get GOP support. Senator Dick Durbin, the No. 2 Senate Democrat, said Monday he thinks there could be 60 votes — the threshold needed to pass in the chamber — on an economic package as large as $3 trillion. However, to get those votes, he said the Senate needed to move forward with a plan to restore the lawmaker-directed spending custom — known as earmarks — that was banned a decade ago.

“We can create much more bipartisan appropriation bills and infrastructure bills with earmarks,” Durbin told reporters. “Everybody talks about it but nobody does anything about it. I think Joe Biden — a product-slash-creature of the Senate — would understand that as well as anyone.”

Any bill would likely direct billions of dollars in spending to fund research and key technology. Schumer and Senator Todd Young, an Indiana Republican, have pushed legislation that would provide $100 billion to the National Science Foundation and create regional technology centers funded by the Commerce Department to attract investment in their areas. Representatives Ro Khanna, a progressive Democrat from California, and Mike Gallagher, a Wisconsin Republican, have pushed that idea in the House.