Georgieva: The Global Economy Faces a Fork in the Road 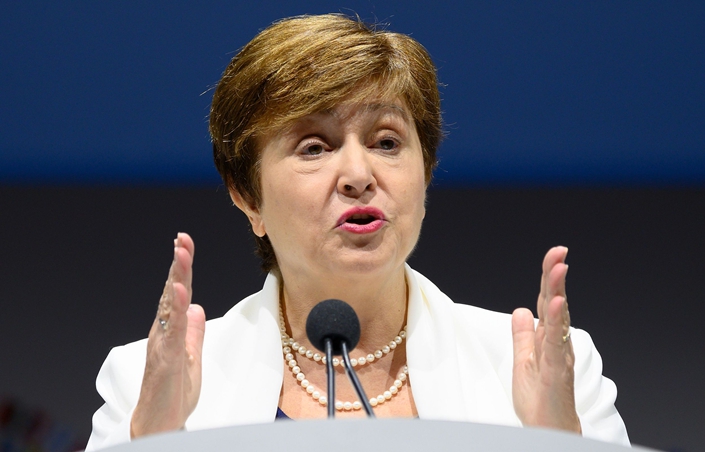 As G-20 finance ministers and central bank governors meet virtually this week, the world continues to climb back from the worst recession in peacetime since the Great Depression.

The IMF recently projected global GDP growth at 5.5% this year and 4.2% in 2022. But it is going to be a long and uncertain ascent. Most of the world is facing a slow rollout of vaccines even as new virus mutations are spreading — and the prospects for recovery are diverging dangerously across countries and regions.

Indeed, the global economy is at a fork in the road. The question is: will policymakers take action to prevent this Great Divergence?

As our note to the G-20 meeting points out, there is a major risk that as advanced economies and a few emerging markets recover faster, most developing countries will languish for years to come. This would not only worsen the human tragedy of the pandemic, but also the economic suffering of the most vulnerable.

In other words, the convergence between countries can no longer be taken for granted. Before the crisis, we forecast that income gaps between advanced economies and 110 emerging and developing countries would narrow from 2020 2022. But we now estimate that only 52 economies will be catching up during that period, while 58 are set to fall behind.

This is partly because of the uneven access to vaccines. Even in the best-case scenario, most developing economies are expected to reach widespread vaccine coverage only by end-2022 or beyond. Some are especially exposed to hard-hit sectors such as tourism and oil exports, and most of them are held back by the limited room in their budgets.

Last year, advanced economies on average deployed about 24% of GDP in fiscal measures, compared with only 6% in emerging markets and less than 2% in low-income countries. Cross-country comparisons also show how more sizable crisis support was often associated with a smaller loss in employment.

And it is not just divergence across countries. We also see an accelerated divergence within countries: the young, the low-skilled, women, and informal workers have been disproportionately affected by job losses. And millions of children are still facing disruptions to education. Allowing them to become a lost generation would be an unforgiveable mistake.

It would also deepen the long-term economic scars of the crisis, which would make it even more difficult to reduce inequality and boost growth and jobs. Think of the challenges ahead: for G-20 economies alone (excluding India and Saudi Arabia due to data limitations), total employment losses are projected at more than 25 million this year and close to 20 million in 2022, relative to pre-crisis projections.

So again, we stand at a fork in the road — and if we are to reverse this dangerous divergence between and within countries, we must take strong policy actions now. I see three priorities:

First, step up efforts to end the health crisis.

We know that the pandemic is not over anywhere until it is over everywhere. While new infections worldwide have recently declined, we are concerned that multiple rounds of vaccinations may be needed to preserve immunity against new variants.

That is why we need much stronger international collaboration to accelerate the vaccine rollout in poorer countries. Additional financing to secure doses and pay for logistics is critical. So, too, is timely reallocation of excess vaccines from surplus to deficit countries, and a significant scaling up of vaccine production capacity for 2022 and beyond. Insuring vaccine producers against the downside risks of overproduction may be an option worth considering.

We also need to ensure greater access to therapies and testing, including virus sequencing, while steering clear of restrictions on exports of medical supplies. The economic arguments for coordinated action are overwhelming. Faster progress in ending the health crisis could raise global income cumulatively by $9 trillion over the 2020-2025 period. That would benefit all countries, including around $4 trillion for advanced economies — which beats by far any measure of vaccine-related costs.

Second, step up the fight against the economic crisis.

Led by G-20 countries, the world has taken unprecedented and synchronized measures, including nearly $14 trillion in fiscal actions. Governments need to build on these efforts by continuing to provide fiscal support — appropriately calibrated and targeted to the stage of the pandemic, the state of their economies and their policy space.

The key is to help maintain livelihoods, while seeking to ensure that otherwise viable companies do not go under. This requires not just fiscal measures, but also maintaining favorable financial conditions through accommodative monetary and financial policies, which support the flow of credit to households and firms.

The considerable monetary easing by major central banks has also enabled several developing economies to regain access to global capital markets and borrow at record-low rates to support spending, despite their historic recessions. Given the gravity of the crisis, there is no alternative to continued monetary policy support. But there are legitimate concerns around unintended consequences, including excessive risk-taking and market exuberance.

One risk going forward — especially in the face of diverging recoveries — is the potential for market volatility in response to changing financial conditions. Major central banks will need to carefully communicate their monetary policy plans to prevent excess volatility in financial markets, both at home and in the rest of the world.

Given their limited resources and policy space, many emerging market and low-income nations could soon be faced with an excruciating choice between maintaining macroeconomic stability, tackling the health crisis, and meeting peoples’ basic needs.

Their increased vulnerability not only affects their own prospects for recovery, but also the speed and scale of the global recovery; and it can be a destabilizing force in a number of already fragile areas. Vulnerable countries will need substantial support as part of a comprehensive effort:

Another option under consideration is a new SDR allocation to help address the global long-term need for reserves. This could add a substantial, direct liquidity boost to countries, without adding to debt burdens. It could also expand the capacity of bilateral donors to provide new resources for concessional support, including for health spending. An SDR allocation served the world well in tackling the global financial crisis in 2009 — it could serve us well again now.

Following a comprehensive approach also means dealing with debt. The G-20’s debt service suspension initiative (DSSI) quickly freed up vital resources. And the new Common Framework can go even further: facilitating timely and orderly debt treatments for DSSI-eligible countries, with broad creditor participation including the private sector. These treatments should involve debt service reprofiling to help countries facing large financing needs, and deeper relief where debt burdens have become unsustainable. With the first requests in, the Common Framework should be swiftly operationalized by all creditors — official and private.

For its part, the IMF has stepped up in an unprecedented manner by providing over $105 billion in new financing to 85 countries and debt service relief for our poorest members. We aim to do even more to support our 190 member countries in 2021 and beyond.

That includes supporting efforts to modernize international corporate taxation. We need a system that is truly fit for the digital economy and that is more attuned to the needs of developing countries. Here multilateral efforts will be essential to help ensure that highly profitable firms pay tax in markets where they do business and thereby strengthen public finances.

These policy measures can help address the Great Divergence. Given their resources, advanced economies will continue to invest in human capital, digital infrastructure and the transition to the new climate economy. It is vital that poorer countries have the support they need to make similar investments, especially in the job-rich climate adaptation measures that will be essential as our planet gets warmer.

The alternative — to leave poorer countries behind—would only entrench abject inequality. Even worse, it would represent a major threat to global economic and social stability. And it would rank as a historic missed opportunity.

We can take inspiration from the spectacular international cooperation that has given us effective vaccines in record time. That spirit is now more important than ever to overcome this crisis and secure a strong and inclusive recovery.

The article was first published on IMFBlog.