Blog: This Is What It’s Like to Go Through Quarantine in China 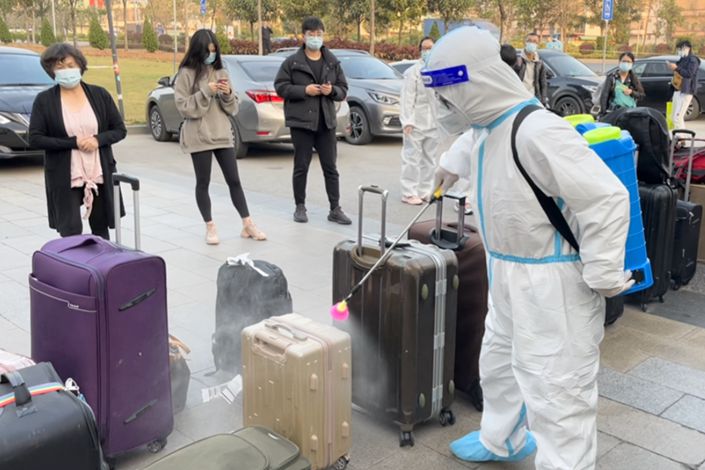 Baggage is fumigated at Guangzhou Airport.

Close to midnight at Auckland airport, a few masked passengers and staff moved past shuttered shops and restaurants, lost in their own thoughts, or in the glow of their phones. The passengers were furtive as we congregated to board, and entering the plane for Guangzhou, the anxiety was palpable.

During an intended short visit from Beijing, where I have been based since the mid-1980s, I became marooned for a year in my homeland and city of birth, Auckland. I strengthened bonds of family and friendship and experienced the uncommon community of New Zealanders facing Covid. New Zealand went into isolation, more out of fairness to the vulnerable few than fear of authority or becoming ill. Now I was returning to China, where my business partners had striven for a year to serve our clients, while maintaining each other’s morale in their own locked-down lives. Chinese people too complied with their government’s requirements, also out of a sense of unity rather than fear of authority, despite the cliches in the Western media that: “It is all right for China, it is a dictatorship.”

A perfect Auckland day, the night was clear and full of stars. Leaving safe, exquisite, isolated New Zealand to go into the unknown world of Covid, I felt a sense of purpose, mixed with a vague feeling of uncertainty — more about the health-vetting processes I would have to endure rather than fear of the illness itself. Twenty-one days of quarantine in a hotel in Guangzhou without being able leave the room, and then a further seven days in isolation at home in Beijing lay ahead of me, marked off by a regular series of nasal and oral swabs.

There were only crackers and nuts on the flight, and tea poured from time to time by friendly, white-hazmat-clad cabin staff. I imagined how I would work them into a bedtime story I planned to tell a grandnephew over the phone in the coming weeks; perhaps “Kidnapped by polar bears?”

There was little communication between the few passengers as we flew the eleven dark hours through the long night that stretched back down five time zones.

At 4.30 a.m. the towns and cities of the Pearl River Delta glittered like broken necklaces below the aircraft. Still trussed up in their white gear, the crew began to move through the cabin, rousing passengers and offering more tea. They must have been so uncomfortable wearing this regalia the whole flight.

There was an increased atmosphere of fear among the passengers. A few children sensed their parents’ anxieties and started grizzling and crying. With most Covid cases in China coming from the borders and arrival/quarantine facilities, officials were understandably also anxious. Some spoke calmly and clearly, and others gabbled dominantly, eyes flaring. When I asked one woman to repeat what she had said, she spoke even louder and faster, her eyes through her large glasses wide with fear.

I walked along a line of desks, dismissed by a series of friendly waves from seated health ministry colleagues in full hazmat regalia (no-one wanted to deal with the only foreigner) to a table opposite a woman in her late-20s. She took a deep breath and asked me something in English I did not understand. I said, “I speak Chinese, but please speak slowly.” I could only see her eyes, and they were smiling. She guided me through a series of online registrations, logging onward travel plans and downloading QR codes to the WeChat app on my phone. One QR code would become active when I had finished my initial 21 days of quarantine. Without it, I could not get into a cab, enter a shop or restaurant, take a train or aircraft.

Many New Zealanders have thus far chosen not to use their Covid-tracing apps regularly. In China, the choice to register in order to keep others safe has already been made for everyone by the government.

With fewer than four Covid deaths per million people, China’s society and economy have largely recovered, while the United Kingdom is entering another partial lockdown and will soon record 2,000 deaths per million people. After frequent conversations with clients, colleagues and friends in China, two of whom are scientists, I was returning with the comfort that the numbers of cases being reported in China were probably accurate.

In queue for the Covid tests, people glanced furtively at those coming back out of the little corridor that led to the testing rooms. Those tested gathered their hand-luggage and hurried away; some appeared flustered, but most looked stoic. Entering the corridor, we could hear gurgles, gasps, cries and some protests. We collectively tensed. I told myself, it can’t be worse than Auckland, which had only been uncomfortable.

In my Covid testing booth I heard a supervisor tell the young nurse as she “attempted” the nasal swab, “Not like that. Well, it’s ok, I guess. You’ll get the hang of it after you’ve done a few.” It was her first day, perhaps her first minute on the job. He obviously assumed that a foreign passenger would not understand Chinese. She had inserted a swab on a long white stem and left it sitting in my rear nasal cavity. My face trembled, but it was not painful. She removed the swab and started stabbing another under my tongue and at the back of my throat, prompting mild gagging reflexes and weird involuntary oral snorts. I thanked her, vowing to myself to try to restrain the involuntary reflexes in the next round of tests.

I had been told by Chinese friends that to avoid being dumped for three weeks in a two-star guest house in a remote Guangzhou county, I should ask for the China Southern Airport Hotel, and keep stepping out of the bus queues until I was sure I got the bus going there. I had hoped for a large room full of light with a window that opened, looking at a bush clad hill, with a temple on it.

Our group seemed to be the first overseas arrivals that day, and I was in the first 10 or so to be processed and led to the bus lines. I said to myself, “I won’t try to influence this, but just take what comes.”

Another announcement in Cantonese-accented Mandarin followed by unintelligible mumbled English, and we moved to the bus to load our luggage. Masked, pensive people jostled bags and each other, often apologetically, cramming the luggage compartments as white suited figures continued to relay instructions. There was an eerie quiet as we mounted the steps. The diesel engine roared, I sat awkwardly, nursing a bag on my knees in a seat with a broken back that reclined tortuously. We jerked forward, lunging at corners and honking at distant cars in otherwise empty streets. I settled back uncomfortably for a long drive, but after 15 minutes we came to the entrance of a large airport hotel.

More polar bears came out of the hotel, waved, walked away and come back and walked away again. A man in his late 50s boomed, "Open the doors fools." There was a hydraulic “hiss” and we staggered out to grapple our luggage from the flanks of the bus and set it down in lines to be disinfected.

“Do you have a room with light?” I asked on checking in. “I don’t expect special treatment,” I said, “but I am here for 21 days.” The hazmat man nodded. We exchanged WeChat details and I trundled my bags past one more temperature check to the lift for the ninth floor. The room was large and full of light. I could see near, green hills against a backdrop of low blue mountains. But no temple.

Living a long time in a foreign country we love, a part of ourselves becomes rooted there. It can create a small sense of loss when we leave and a deep feeling of coming home when we return.

The days began. There were twice daily temperature checks taken by friendly health ministry staff and adequate but bland meals in plastic panniers left at the door three times a day; these I quickly cancelled, opting to order deliveries online from the few surrounding restaurants. The windows only opened a few millimeters, but after unscrewing the clip that prevented them opening wider, I turned off the air-conditioning and my room filled with fresh winter air.

Sensing that the hotel would not be full and being so close to the Lunar New Year holiday, I called the front desk and asked if I could upgrade to a suite if one became free. Two days later, at a marginal increase to my room rate, I was sitting in a large east facing two-room suite, looking at my other request, a stationary bike.

The article was first published on The New Zealand Listener on Feb. 27.