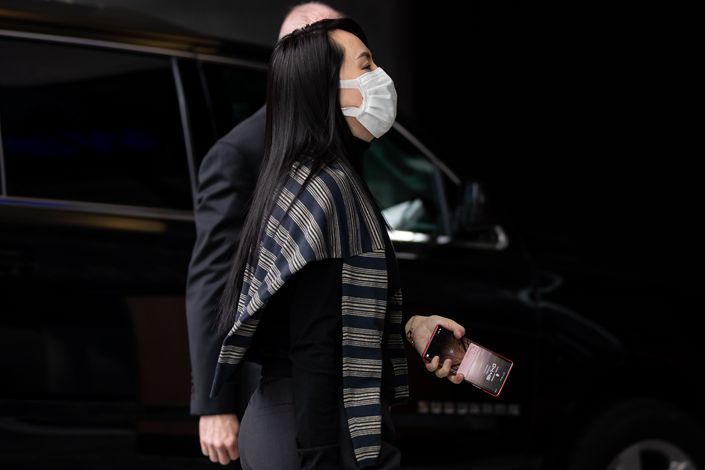 (Bloomberg) — Lawyers representing Meng Wanzhou tried to discredit evidence presented by U.S. officials in her extradition hearing, arguing a banker at HSBC Holdings Plc knew that a company doing business with Iran was actually an affiliate of Huawei Technologies Co.

One of Meng’s lawyers, Frank Addario, told the Supreme Court of British Columbia that the Department of Justice presented “misleading and unreliable” evidence when it described a meeting Meng had with an HSBC executive in a Hong Kong tea room in 2013.

That meeting is a key event in the U.S. case against Meng, which alleges the Huawei chief financial officer misled banks into processing Huawei transactions that potentially violated U.S. sanctions against Iran.

Meng, the eldest daughter of Huawei founder and CEO Ren Zhengfei, was arrested on a U.S. handover request at Vancouver International Airport in December 2018 on fraud charges. She has been living in Vancouver since then with a court-appointed security detail and restrictions on her movements. Her case has become a flashpoint in U.S.-China relations, with Canada caught in the middle.

Meng Wanzhou, chief financial officer of Huawei Technologies Co., leaves Supreme Court during a break in Vancouver, British Columbia, Canada, on Monday, March 1, 2021. Over the next 10 weeks her lawyers plan to present the case they've been building for more than two years, attempting to show there was an abuse of process in her arrest and that she should be released.

In seeking the admission of new evidence Monday, Addario argued that HSBC brass had known for some time that Huawei controlled the accounts of Canicula Holdings Ltd., the parent company of Skycom, the entity accused of doing business in Iran.

Meng went into the 2013 Hong Kong meeting, which featured a Powerpoint presentation by Meng in Chinese and translated into English, assuming her counterpart from the bank had full knowledge of Huawei’s “non-arm’s-length” relationship with Canicula, Addario said in court.

Huawei sold Skycom to Canicula in 2007. Meng’s lawyers argued that Huawei’s continued affiliation with Skycom through its control of Canicula’s accounts was widely known within the bank.

HSBC’s relationship manager on the Huawei account, who cannot be named because of a court-ordered publication ban, “couldn’t be doing his job and not know about the relationship” between Huawei and Skycom, Addario said. “He’s far more than a gopher. He’s the actual conduit of information between the two institutions.”

Last month, Meng’s legal team failed in an attempt in a British court to obtain internal documents from HSBC that might bolster her case.

In rebuttal, Canadian prosecutor Robert Frater reminded the court that the extradition hearing is not meant to take the place of the trial Meng might face in the U.S. if she is sent there.

The proceedings are expected to continue until at least May and may be subject to further appeals.