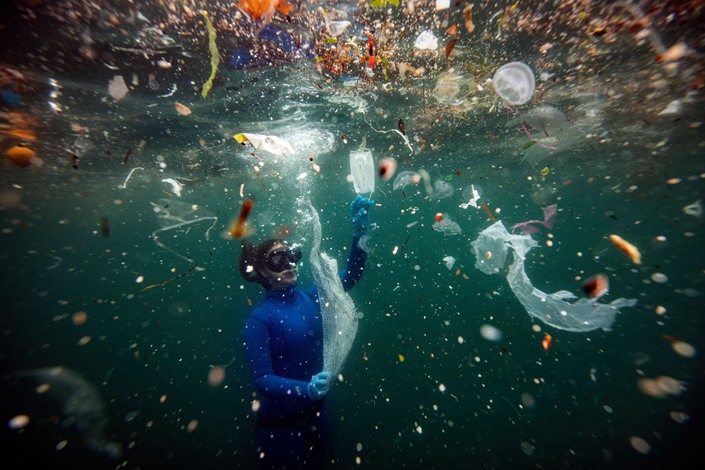 Turkish world record-holder free-diver and divers of the Underwater Federation Sahika Encumen dives amid plastic waste in Ortakoy coastline to observe the life and pollution of Bosphorus in Istanbul, Turkey on June 27, 2020. Photo: Bloomberg

(Bloomberg) — Few places in the world have greater need for a new type of sustainable debt to fund water projects and protect the oceans than Asia, with its more than 100,000 kilometers of coastline.

While so-called “blue bonds” are relatively rare, that’s about to change as more Asia-Pacific nations set their sights on improving the sustainability of water resources and marine life, according to BNP Paribas Asset Management.

“I’d expect to see more focus on ecosystem restoration and preservation, which could result in more sustainability bond issuance focusing on the blue economy, water and waste,” according to Gabriel Wilson-Otto, global head of sustainability research at BNP Paribas in Hong Kong.

While the Seychelles sold the world’s first sovereign blue bond in 2018, just a handful of borrowers have followed suit, led by Asia. A China issuer completed the first dual-currency blue deal in the offshore market in September, the first of its kind in the region.

Australia may join the blue list. Pollination Group, a climate change advisory and investment firm, is working with private issuers including banks to launch a corporate blue bond with proceeds funding ocean-based biodiversity projects, according to Martijn Wilder, a co-founding partner at the firm. These could produce “blue carbon credits” which can be sold to the Australian government’s carbon-offset program, he said.

Global sales of green bonds have risen dramatically over the past five years, with some $233 billion sold in 2020, up nearly 13% over the previous year, according to data compiled by Bloomberg. That’s been accompanied by a clutch of new securities sold or in the works, such as carbon neutral, transition, nature and sustainability bonds.

While the rise of these labels is a global phenomenon, the defining characteristic in Asia is the focus on local sustainability challenges, according to Wilson-Otto. That includes the blue economy — clean oceans, sustainable fishing and plastic waste, water, and creating sustainable cities with better transit and affordable housing, he added.

The Asian Development Bank aims to promote blue-bond issuance through its Oceans Financing Initiative, which will expand its investments and assistance in the “blue economy” to $5 billion by 2024. The initiative also plans to facilitate revenue guarantees to reduce investor risk.