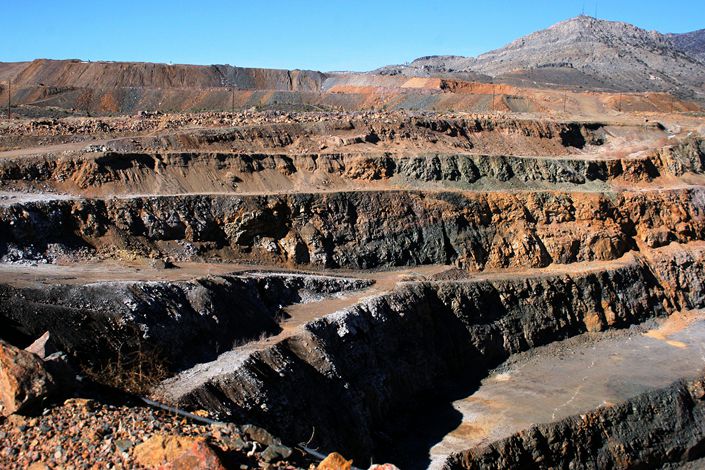 Mountain Pass, California, in the U.S. is home to one of the world's largest and richest deposits of rare earth minerals, mined by Molycorp. Photo: VCG

(Bloomberg) — Rare earth miners and uranium producers are reaping rewards from the flood of money pouring into electrification and environmental, social and governance (ESG) investing themes.

Shares of MP Materials Corp., the largest U.S. based miner of rare earths, is up more than fourfold since Biden won the election four months ago, compared with an 86% gain in VanEck Vectors Rare Earth/Strategic Metals ETF.

Shares in the company, which went public via a SPAC deal in July, rose for a third day and were up 0.7% to $49.80 on Wednesday. Morgan Stanley initiated research on the stock on Tuesday, with a price target of $57.

MP is “a play on accelerating adoption of electric vehicles and electrification trends in wind turbines,” Morgan Stanley analyst Carlos De Alba said in a report on Tuesday. “If you like EV, you’ll love MP.” The stock has three buys, zero holds or sells and twelve month average analyst price target is $36.

Meanwhile, with supply tightening and ESG demand from investors ramping up, uranium stocks such as Denison Mines Corp. have surged more than 70% this year, compared with 23% gain in Global X Uranium ETF. The stock rose 2% on Wednesday.

“When you add to this, uranium stocks are now gaining attention from ESG investors due to their low GHG footprint and quintessential role as a clean energy alternative, we see the set-up for incremental/new Uranium investments as opportune,” Johnson added, referring to greenhouse gas emissions.

The uranium sector could gain even more as some are speculating that large funds are probably slowly increasing their position in the sector, according to Johnson. “If true, this could go on for a long time as they build significant positions ahead of the inevitable price rise in the commodity,” he said.

The so-called rare earth metals are used in everything from lithium-ion batteries to electric vehicles, wind turbines and missile guidance systems. There are only handful of producers globally, with China controlling a majority of the sector’s production and capacity.

Both Energy Fuels and Neo Performance were up on Wednesday after a rally on Tuesday, bringing this year’s advance to 50% and 35% respectively.