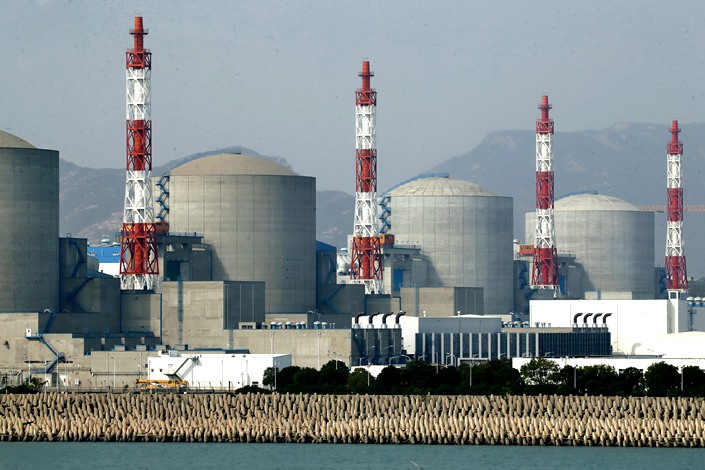 (Bloomberg) — China is offering new backing for the development of nuclear power as a key tool in its drive to cut carbon emissions.

The nation will promote the construction of coastal nuclear power plants and aims to have 70 gigawatts of generation capacity by 2025 from about 50 gigawatts at the end of last year, according to the latest five-year plan presented Friday to China’s annual National People’s Congress. That would equate to about 20 new reactors.

While the target fits in with the nation’s existing goals, the fact that the nuclear sector’s future is being laid out in fine detail — unlike some of the alternatives including solar and wind — shows the importance that China’s leadership is attaching to the fuel.

It also reflects the new impetus behind the sector after a three-year freeze on plant approvals that ended in 2019. Chinese nuclear firms rose on the news Monday, with China Nuclear Engineering & Construction Corp. Ltd. up 10% and China National Nuclear Power Co. Ltd. up as much as 6.9% in Shanghai.

The plan offers “a surprisingly ambitious target given that there is much less capacity under construction currently than is needed,” said Lauri Myllyvirta, lead analyst at the Centre for Research on Energy and Clean Air. “It can be read as a high level signal to speed up the initiation of new projects.”

Under China’s goal to lift the share of non-fossil-fuel energy sources to 20% by 2025, the nation will “accelerate a push into the construction of third-generation coastal nuclear plants,” and promote technologies including modular small-scale reactors and offshore floating nuclear reactors, according to the five-year plan. A separate report to the NPC — delivered just days before the 10-year anniversary of the Fukushima disaster in Japan — said China would take active and well-ordered steps to develop nuclear energy and ensure its safe use.

The country’s plans are at odds with much of the rest of the world, as policymakers continue to show caution in the aftermath of Fukushima, according to M. V. Ramana, a professor at the School of Public Policy and Global Affairs at the University of British Columbia. “China is definitely an exception to the trend around the world, where the problems of nuclear energy have led to a justified slowdown in investments,” he said.

“It is not just environmental concerns but also economic ones,” Ramana said. “Nuclear energy is a very expensive source of electricity and reactor construction takes long periods of time. I am surprised that Chinese policymakers are persisting in increasing investment into this source of energy.”

Government researchers in China have previously said nuclear capacity could rise to more than 130 gigawatts by 2030. The nation is expected to surpass France and then the U.S. to become the world’s biggest nuclear generator this decade.

“Climate change and air pollution issues will continue to drive opportunities and support the continued expansion” of China’s nuclear power sector, said Daine Loh, a Singapore-based power and renewables analyst at Fitch Solutions. “We do expect China to maintain its robust growth momentum for the sector in line with the strong regulatory support in place.”