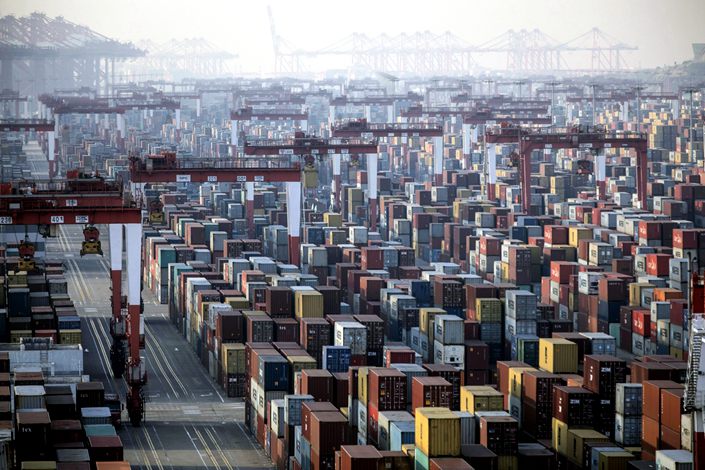 Shipping containers next to gantry cranes at the Yangshan Deepwater Port in Shanghaiy on Jan, 11, 2021. Photo: Bloomberg

(Bloomberg) — China’s exports surged in the first two months of the year, reflecting strong global demand for manufactured goods and with figures partly skewed by the low base in 2020 when the economy was in lockdown.

Exports jumped 60.6% in dollar terms in the January-February period from a year earlier, data from the General Administration of Customs showed Sunday, well above the 40% median estimate in a Bloomberg survey of economists. In February alone, exports more than doubled from last year.

The first two months are normally volatile for China’s economic activity because of the week-long Lunar New Year holiday, which fell in February this year. The figures are even more distorted this time around because of the comparison with 2020, when factories and businesses were shut to contain the coronavirus outbreak in the early part of the year. Exports plunged 17.4% in the first two months of last year.

Even with the favorable base effects, the data shows exports continued to benefit from soaring global demand for medical equipment and work-from-home devices, which has helped to underpin China’s V-shaped recovery from the pandemic since the second half of the year.

Exports also benefited from a shorter-than-usual vacation for migrant workers during this year’s Lunar New Year break and the early resumption of factory production. Travel restrictions imposed early in the year prevented many workers from making their annual trip home during the holiday.

“Excluding distortions from base effects, trade growth was still quite solid,” Nomura Holdings Inc. economists led by Ting Lu wrote in a note. While export growth will likely slow after March as base effects ease, fresh stimulus measures in developed nations, especially in the U.S., “may bolster external demand for Chinese products and partly offset the downward pressure,” they said.

Imports also grew strongly, climbing 22.2% in the first two months of the year from a year earlier, exceeding the 16% gain predicted by economists. A breakdown of the data suggests a divergence between heavy industries and hi-tech sectors, with the latter outperforming, according to Bloomberg Economics.

The value of exports declined to almost $205 billion in February, likely due to the Lunar New Year holiday. However, that was still 155% higher than shipments in the same month in 2020, when China was in lockdown to contain the first outbreak of Covid-19.

The data comes two days after the National People’s Congress, the biggest political meeting of the year, kicked off in Beijing, with the government setting out its economic agenda for coming years. Authorities are targeting growth of more than 6% this year, a relatively conservative goal compared with the 8.4% expansion that economists predict. The government also signaled more restrained monetary and fiscal policy after last year’s pandemic stimulus.

“We expect Beijing to carry out its policy normalization in coming months, although a sharp shift in policies appears unlikely,” Nomura’s economists said.

The trade surplus reached $103.25 billion in the first two months of the year

Trade with the U.S. surged 81.3% in the January-February period from a year earlier, taking the trade surplus to $51.3 billion. For a breakdown of China’s main trading partners, click here