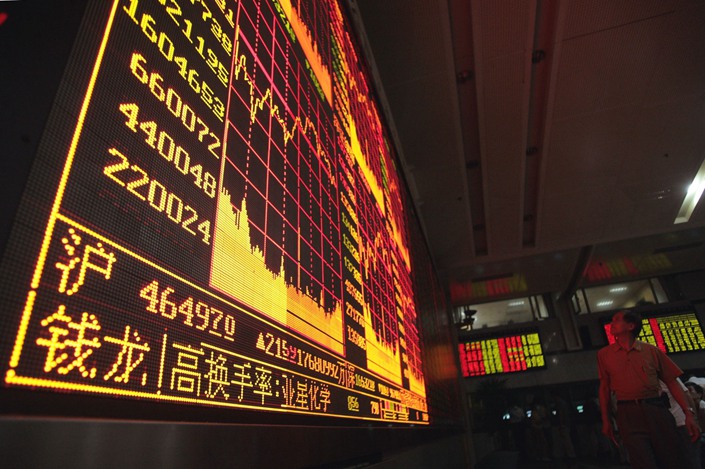 (Bloomberg) — China’s main stock benchmark entered a correction on Monday, on concerns about liquidity conditions and lofty valuations in some of the recently favored stocks.

The CSI 300 Index fell 3.5% on Monday, piercing its 100-day moving average and putting losses from its recent Feb. 10 peak to 13%. Meanwhile, the nation’s ChiNext index, a gauge of small-cap stocks, slumped 5%.

The correction comes just 13 days after the gauge closed at its highest level since 2007 before the market paused for the Lunar New Year holiday. While the CSI 300 briefly surpassed its 2007 closing high after the break, traders started taking profit and unwinding so-called crowded favorite trades on worries that the market may have heated up too quickly.

The violent rotation out of pricey shares in China echoes the global trend where stocks that surged last year — such as Tesla Inc. and the exchange traded funds managed by Cathie Wood’s Ark Investment Management — took a beating as yields rise. Monday’s rout will likely weigh on the ongoing annual session of National People’s Congress, the most important political event of the year where government officials lay out major economic and political priorities.

“It’s a race to the exit for funds in the big growth names, and I would be in no rush to buy dips at this point because today is a rather critical fall beyond the bull/bear line with the index erasing gains for the year,” said Lin Menghan, a fund manager at Shanghai Xiejie Asset Management Co. Ltd. “There is to some extent a stampede and any rebound now would just be paving the path for a further drop.”

Those popular growth names included Kweichow Moutai Co. Ltd., which was down 4.9% and among the top drags on the index. Meanwhile, peers Luzhou Laojiao Co. Ltd. plunged by the 10% daily limit and Wuliangye Yibin Co. Ltd. dropped 8.3%. The recent selloff in those former darlings has caused carnage in the country’s top mutual funds, which had crowded into the shares to ensure outperformance.

China’s Premier Li Keqiang on Friday set an objective of more than 6% growth for the nation’s economy, widely considered as conservative. The market is still assessing what to make of the targets and goals and interpreting expected impact on shares, said Fu Lichun, co-founder at Shenzhen Yuntai Investment Management Co. Ltd.

“That has added to the persistent issue of high valuations and people may be selling on the news.”

Also leading the retreat in the index were solar and defense stocks, with AECC Aviation Power Co. Ltd. falling by the 10% daily limit, while LONGi Green Energy Technology Co. Ltd. also slid by a similar magnitude.