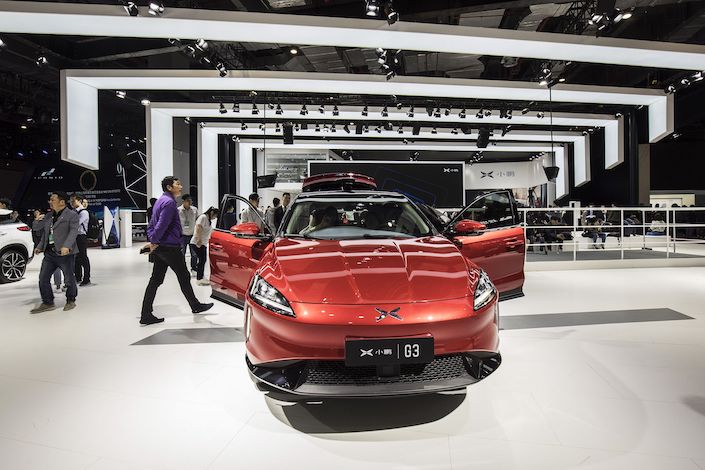 (Bloomberg) — Chinese electric-vehicle maker Xpeng Inc. reported its loss narrowed in the fourth quarter as deliveries beat its own expectations by 30%, a sign the startup is building a solid footing in the world’s largest market for cleaner cars.

Guangzhou-based Xpeng posted a net loss of 787.4 million yuan ($121 million), compared with a 1.15 billion yuan deficit in the third quarter and a loss of 997.1 million yuan the same period a year ago, according to a statement Monday. Revenue for the three months ended Dec. 31 soared almost 350% to 2.85 billion yuan.

“We closed 2020 on a strong note,” Chairman and Chief Executive Officer He Xiaopeng said. “Our relentless focus on providing highly differentiated smart EV products to our customers and expanding our sales and service network supported our achievements and empowers our sustainable future growth.”

The figures round out a robust 2020 for Xpeng, whose New York-listed shares are up 87% over the past 12 months even after taking a battering in recent weeks as investors globally dumped EV stocks following a Tesla Inc. rout.

Despite being established only in 2014, Xpeng delivered 12,964 of its G3 sport utility vehicles and P7 electric sedans in the December quarter, compared with the 10,000 it forecast in the third quarter. Annual deliveries of the two models it makes totaled 27,041, more than double the 2019 volume. Deliveries in the first two months of 2021 were 8,238.

Xpeng said it expects deliveries to be around 12,500 for the first quarter, meaning revenue for the three months ending March 31 may reach 2.6 billion yuan, a year-over-year increase of around 530%.

Like Chinese rivals Li Auto Inc. and Nio Inc., which have already released their fourth-quarter earnings, Xpeng also reported improving gross margins, with the measure for the December quarter coming in at 7.4%, better than the 4.6% as of Sept. 30.

The company will prioritize R&D investment, branding and service-network building, as well as international expansion over the coming years, President Brian Gu said in a phone interview last week. Xpeng began deliveries of its first batch of EVs to Europe in December.

The company also plans to launch a family sedan that uses laser-based sensors to make driving safer in the second quarter, taking on models like Toyota Motor Corp.’s Camry and Volkswagen AG’s Passat. That car is expected to be available in the final quarter this year. Last week, Xpeng pushed out new variants of its current models that are powered by lithium-iron-phosphate batteries, which sacrifice some driving range but save consumers around 20,000 yuan.

“There is a significant number of consumers in China who mainly use their vehicles for city driving,” Xpeng said at the time. “Many normally drive about 20 kilometers per day with a weekly range requirement about 200 to 300 kilometers, especially in the second and third tier cities. For these customers, vehicles with smarter in-car functions such as smart voice assistance, intelligent cockpit, navigation-assisted autonomous driving with a medium-level driving range are more appealing.”

GU also acknowledged that Xpeng’s competitors are changing. As well as Tesla and other Chinese EV makers, competition is coming from the big technology giants like Apple Inc., Baidu Inc. and Huawei Technologies Co. Huawei is planning to make EVs under its own brand, Reuters reported last month, while Apple is hunting for a partner to help make its self-driving car.

However, Gu said those companies could take “a few years” to launch their first models, possibly not until around 2024.

“We won’t be afraid of the competition by then because we’re five years ahead building our own product lineup and creating a technological barrier,” he said.

To prepare for competition from Big Tech, Gu said Xpeng is investing heavily not only in vehicle production but also software development, noting the latest release of the company’s navigation guided pilot function. About 20% of Xpeng’s P7 sedan owners have paid an extra 20,000 yuan for the highway-driving function, which was rolled out in late January.

Electric-vehicle demand in what is the world’s biggest car market is set to soar as consumers embrace cleaner automobiles and the cost of EVs tumbles. Research firm Canalys said in a report last month that EV sales in China may grow more than 50% in 2021.

Wedbush analyst Dan Ives wrote in a recent note that China could see “eye-popping demand into 2021 and 2022” with Tesla’s Shanghai factory a major competitive advantage and domestic players like Warren Buffett-backed BYD Co., Li Auto, Nio and Xpeng also “firing on all cylinders.”

Development of the sector is also still a priority for Beijing with Premier Li Keqiang telling the National People’s Congress Friday that additional car parks, EV charging stations and battery-swapping facilities will be built, as well as battery-recycling systems.