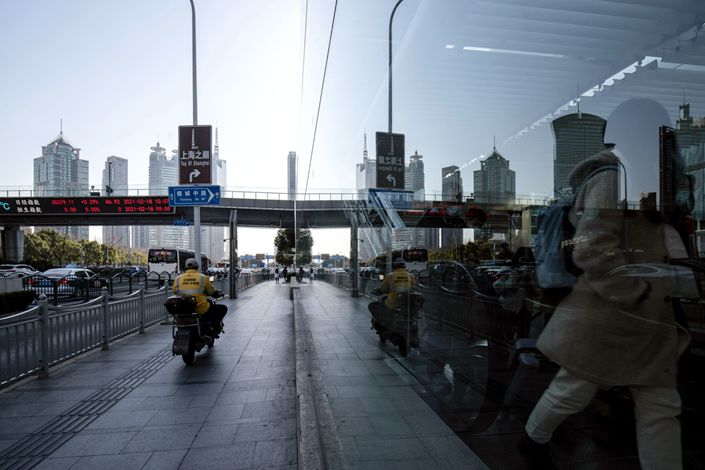 A motorist rides along a road in Pudong's Lujiazui Financial District in Shanghai on Feb. 18. Photo: Bloomberg

(Bloomberg) — The Chinese yuan erased all its gains against the dollar this year, the latest to fall prey to the Treasury-led global market selloff.

The onshore yuan weakened as much as 0.5%, falling past the 6.5283 per dollar level it closed at last year. At its January peak, it was up 1.6% from 2020 as the economy rebounded and investors poured money into the Chinese bond market.

Optimism over a global recovery from the pandemic has morphed into concerns that central banks will withdraw stimulus quicker-than-expected, leading to higher bond yields. This latest bout of market selling was spurred by the U.S. stimulus package and better Chinese exports data.

“Surging U.S. Treasury yields and a USD rebound are pressuring EM Asia currencies including the renminbi,” said Ken Cheung, chief Asia currency strategist at Mizuho Bank Ltd in Hong Kong. “Foreign investors may have started to trim their emerging-market asset exposure and repatriate capital back into dollars. We turn more cautious on the CNY outlook in the near term.”

Monday’s rout across markets picked up pace as Treasury 10-year yields hit 1.61%, nearing Friday’s high. A Bloomberg gauge of the dollar’s strength gained as much as 0.5% to its highest in almost four months.

Trading volumes for onshore yuan rose to $48.9 billion on Monday, the highest level in over two months. Some bank clients who were previously hoarding dollars were selling off positions at higher prices, according to China-based traders, who asked not to be identified as they’re not authorized to speak publicly.

The traders added they also received a higher volume of requests for forward prices on the greenback, including from clients who had just signed import orders and were looking to lock in foreign-exchange rates to guard against further yuan depreciation risks.

China’s main stock benchmark entered a correction on Monday, with concerns over liquidity conditions and lofty valuations in some stocks fueling bearish sentiment.