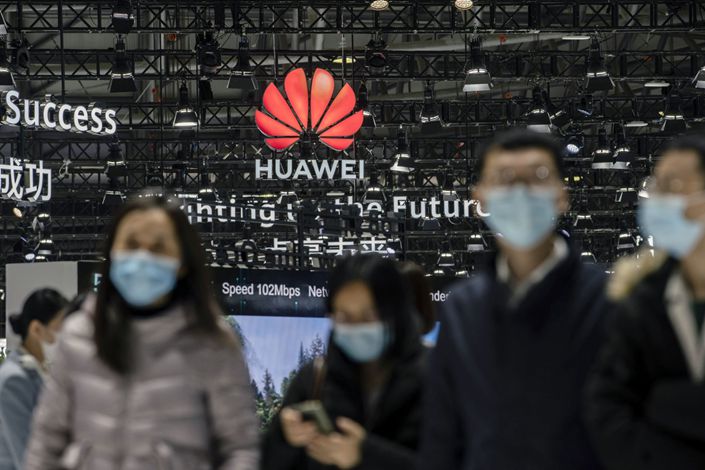 Attendees walk past Huawei’s logo at an exhibition in Shanghai on Feb. 23. Photo: Bloomberg

(Bloomberg) — The Biden administration has informed some suppliers to China’s Huawei Technologies Co. Ltd. of tighter conditions on previously approved export licenses, prohibiting items for use in or with 5G devices, according to people familiar with the move.

The 5G ban is effective as of this week, according to the people, who asked not to be identified to discuss nonpublic communications.

The rules create a more explicit prohibition on the export of components like semiconductors, antennas and batteries for Huawei 5G devices, making the ban more uniform among licensees. Some companies had previously received licenses that allowed them to keep shipping components to Huawei that the Chinese company may have then used in 5G equipment, while other companies were already subject to tighter restrictions.

Companies had complained about confusing rules after former President Donald Trump’s administration added Huawei to the Entity List, requiring that U.S. firms obtain government licenses if they want to sell American tech and intellectual property to the Chinese telecommunications-equipment giant. U.S. officials had deemed the company a national-security threat.

The move is also a sign that the Biden administration plans to move forward on the tighter export controls implemented under Trump and more broadly indicates officials are following through on pledges to be tough on China. In an interview with MSNBC this month, Commerce Secretary Gina Raimondo promised to use the Entity List “to its full effect.”

“From one perspective, it’s cleanup and correcting mistakes from the previous administration,” said William Reinsch, who served as undersecretary of commerce for export administration in the Clinton administration and is now senior adviser at the Center for Strategic and International Studies. “There’s bipartisan support for a tough line on technology transfer to China, and this reflects that.”

The U.S. Commerce Department’s Bureau of Industry and Security, which oversees the Entity List, said in an emailed statement that it can’t comment on “specific export licensing questions.” The bureau said it “works with its interagency partners to apply consistently the licensing policies set forth in the Export Administration Regulations to protect U.S. national security and foreign policy interests.”

U.S. Secretary of State Antony Blinken and National Security Advisor Jake Sullivan will meet with their Chinese counterparts in Alaska next week. It would represent the highest-level in-person exchange between the two sides since President Joe Biden took office in January. Biden and Chinese President Xi Jinping spoke by phone on Feb. 10.

Trump slapped tariffs on hundreds of billions of dollars of imports from China, sparking a trade war that hurt U.S. manufacturing and agriculture even as it protected some slices of industry like steelmakers.

In late February the Biden administration also signaled that it intends to go ahead with a Trump administration-proposed rule to secure the information-technology supply chain, a move that gives the Commerce Department broad authority to prohibit transactions involving “foreign adversaries.”

The interim rule, which will allow the Commerce Department to monitor transactions of governments including China’s, was first proposed by the previous administration in January — days before Biden’s inauguration — and follows an executive order Trump signed in 2019. The department said it would accept public comments on the plan through March 22, the same day it becomes effective.