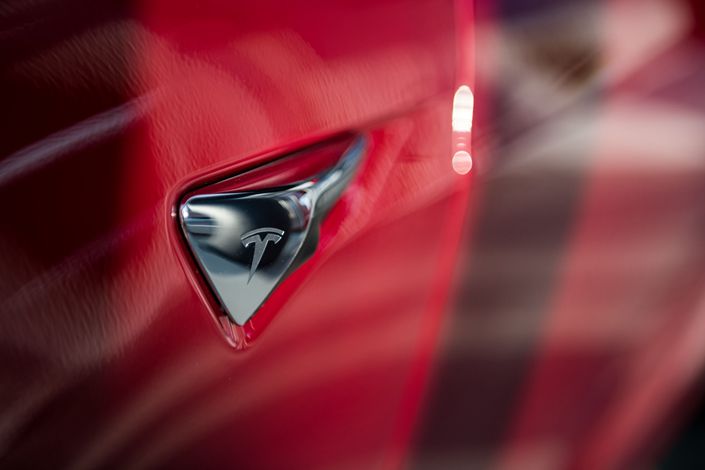 Tesla’s logo is seen on the side-view camera of a Tesla Model S P100D sedan at the company's showroom in New York in December 2017. Photo: Bloomberg

(Bloomberg) — Tesla Inc. CEO Elon Musk used an opportunity to speak to an audience in China to strenuously deny the electric carmaker would ever use a vehicle’s technology for spying.

Appearing on Saturday at the China Development Forum, a conference organized by a unit of the country’s State Council, in a session titled “The Next Disruptive Innovation?” Musk said that if Tesla ever used its cars to spy in China, or anywhere, the company would get “shut down everywhere.”

“If a commercial company did engage in spying, the negative effects to that company would be extremely bad,” said Musk, who was beamed in remotely from America, where it was late in the evening. “For example, if Telsa used the cars to spy in China — or anywhere, any country — we will get shut down everywhere. So there’s a very strong incentive for us to be very confidential with any information.”

His comments came less than 24 hours after Bloomberg reported that Tesla’s cars have been banned from Chinese military complexes and housing compounds because of concerns about sensitive data being collected by cameras built into the vehicles. China, the world’s biggest market for EVs, is key to Musk’s global growth ambitions. The company sold more than 130,000 locally built Model 3 sedans last year in the nation, now its second-largest market after the U.S.

The ban, relayed to residents of military housing and others this week, was triggered by concerns that Tesla is collecting sensitive data via cars’ in-built cameras in a way the Chinese government can’t see or control, a person familiar with the matter said.

Musk, wearing a black suit with white shirt and black tie and seated in front of shelves displaying plaques and trophies, also said it was fortunate that ByteDance Ltd.’s TikTok wasn’t shut down in the U.S., even though there were a lot of people concerned that China was spying via the popular app.

“Of course, on TikTok, people are mostly just doing silly dances,” he said. “So I’m not sure if there’s anything to learn from that. Just in general, I think it’s worth thinking through, even if there was spying, what would the other country learn and would it actually matter? In the vast majority of cases, it doesn’t even matter.”

The mega-billionaire, who is also the CEO of SpaceX and The Boring Co., which specializes in tunnel construction projects, also spoke about how he thinks physics should be taught, the need for cities to become “3D” using underground passageways to ease traffic congestion and the importance of having regulatory oversight with regard to artificial intelligence.

“Dealing with AI is one of the most important challenges that humanity faces, it could potentially be the most” important, he said. “We have never faced a situation where something could be more intelligent than us.”

Musk said that considering there are regulatory agencies governing things like food, drugs, automobiles and aircraft, there should also be an agency that oversees AI safety.

And he agreed with Xue Qikun, president of Southern University of Science & Technology and member of the Chinese Academy of Sciences, that physics should be taught with emotion to make the subject more compelling. Xue was participating in the dialog with Musk from Beijing.

“I think physics could be taught in a much more engaging manner,” Musk said. “I personally do not regard physics as boring, although I think the way physics is taught can often be in a way that is very dry and uninteresting.” Teaching students about the “why” of a thing’s importance and establishing relevance is key, he said.

He added that studying economics is also paramount to deduce whether a technology can be practical from a cost standpoint. To that end, he pushed back on Xue’s views that hydrogen is the future, saying that he instead was a big believer in solar and wind pared with stationary battery storage, and all transport being electric, with the exception of rockets.

The discussion ended with an audience member asking another question about how to get younger people more interested in physics. Zoom call over, Musk was back on his preferred social media platform within minutes, tweeting about orbital propellant depots and cryogenic storage.