What’s Up with China EVs? Here’s a Clue 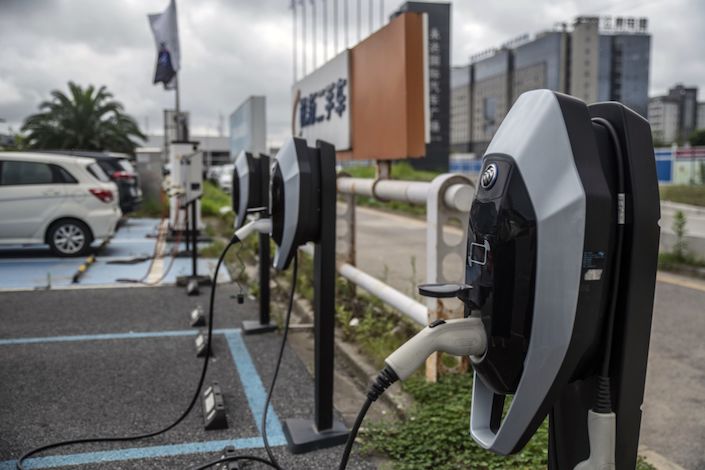 (Bloomberg) -- Dense as it may be, the Chinese government’s annual work report – a summary of the country’s recent economic and social developments, as well as a list of future ambitions — is worth reading. It gives key insights into Beijing’s thinking and, by extension, a hint about what investors should watch in the world’s second-largest economy.

The phrase “new energy vehicle” has been mentioned religiously in the report since 2014, in conjunction with the government's mandate to promote electric car sales. This has played a big part in positioning China as the world’s biggest market for EVs, attracting serious money from, among others, Tesla, which set up a factory in Shanghai.

This year, however, those words have been replaced by new buzz words: EV charging stations, battery swapping facilities, and battery recycling. The change of focus is telling. Having spooled out incentives to foster mass EV adoption – the government has delivered more than 52 billion yuan ($8 billion) in subsidies, for example – China now is focused on ensuring necessary infrastructure is in place to support the sector for the long term. This change will, in time, create pockets of opportunity in areas that may not immediately be apparent.

Take EV charging. Insufficient charging facilities have been cited as one of the key obstacles hindering EV development in China. While the situation is more advanced than in the U.S. — as BNEF analyst and Hyperdrive writer Colin McKerracher recently pointed out, China installed 112,000 public EV charging points in December alone, more than the entire U.S. public charging network — there's room for improvement.

When you drive around Beijing these days, you still need patience and luck to find an available EV charging point, and from time to time, a lot of those two things. There’s one charging pole for every three EVs, on average, in China — about 1.7 million in total, including home and public ones. But the number of EVs is expected to surge 29-fold to more than 160 million vehicles by 2035, creating a huge charging gap, and a great opportunity. For charging-pole providers like startup Qingdao TGOOD Electric Co., which operates China's largest network of EV plugs, and StarCharge, which isn’t listed yet but which plans to be in the not too distant future, that latent demand could pave the way for faster and smoother expansion, as well as provide a quicker path to profitability.

In the same vein, as batteries from the early fleets of EVs that started appearing on China’s roads in 2008 near retirement, lithium-ion battery recycling — a theme highlighted for the first time this year in the work report — is emerging as an urgent task that must be addressed, not only for environmental reasons, but also for devising efficiencies in mining the minerals used to make batteries.

Some 39,000 tons of cobalt and 125,000 tons of nickel could come from spent batteries by 2030, helping to offset any shortfall in mined supply, according to BNEF. For cobalt, that could meet around 10% of projected demand. BNEF also said today that used EVs in China are losing value faster than comparable internal combustion engine vehicles, highlighting the need for battery-recycling facilities.

Companies are starting to respond. Chinese battery maker Contemporary Amperex Technology Co. Ltd., a Tesla supplier, last month announced a new 12-billion-yuan facility in Guangdong, a part of which will be dedicated to battery recycling. In a year when automakers globally took a hit due to the coronavirus, CATL’s Shenzhen-listed shares surged 230%.

Beijing’s vow to build more battery-swap stations is another avenue that investors who want exposure to China’s booming EV market may want to watch. Swapping out an empty cell with a charged one can be as swift as pumping up a gasoline tank, and it also ushers in a new business model that treats a car more like a shell or dumb hardware, within which the intelligent software and battery can be purchased and upgraded via subscription. The China Association of Automobile Manufacturers, a government-backed auto trade body, calls this approach a “battery bank” and said it’s something they’re exploring.

Battery financing, leasing and battery-swap stations are businesses in which more and more companies are starting to dabble. William Li, the CEO of Chinese EV maker Nio, mused recently that shareholder interest in the company’s battery asset-management unit was on the rise. And at a Nio press conference in November, the front-row seats were not for media. They’d been taken — by investors.