Blog: How to Keep Your Spirits Up During Quarantine in China 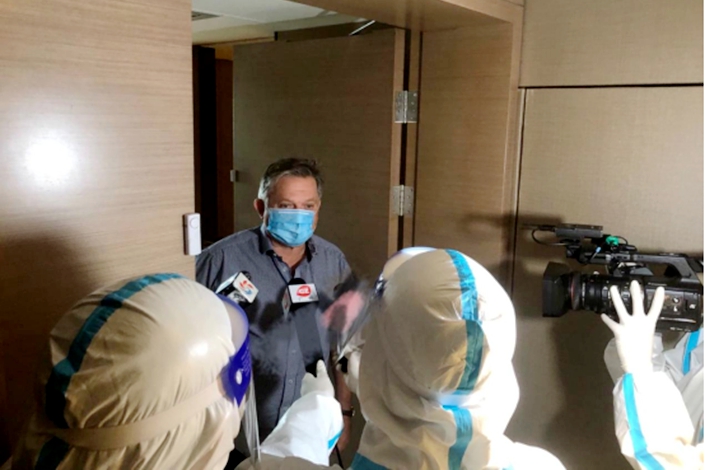 David Mahon meets the Chinese press at his hotel during quarantine.

The 21 days of quarantine in my Guangzhou hotel passed steadily. I settled into routines of morning and evening exercise, corresponding with clients, reading and writing. The routine was the key. Many days were fulfilling, while others were fragmented and dogged by inertia. It is too easy to feed empty curiosity by reading articles randomly online and indulging in semi-informative YouTube clips. Climbing increasingly reluctantly onto my exercise bike (they are poor substitutes for rowing machines), I managed to cycle to nowhere for 40 minutes every day. Being alone for any length of time forces you to face yourself. I knew that I did not have to like what I saw, but needed to accept, and perhaps try to change some things. Three weeks of isolation may seem an unreasonably long time, but if one can deal with two weeks as millions all over the world are doing, an extra week is not too much.

Twice a day, white-clad health workers came to shoot a thermometer at my forehead. There were the less frequent oral and nasal swabs, one blood test, and thankfully none of the rectal swabs some returnees have to submit to (such procedures are rare and widely misreported as being mandatory). The temperature checkers often rang doorbells of facing rooms and tested the first guest to respond. On day three, I observed a tired man open his door in boxer shorts, his face as crumpled as his shirt, and messy grey hair sticking up. I thought, ‘poor bloke, I guess he just let himself go after being cooped up for so long,’ only to catch my own reflection in the mirror as I turned back into my room, a tired man in boxer shorts with messy grey hair standing on end.

After the quiet of my brother’s inner-city Auckland garden, the distant, soft, industrial murmur of Guangzhou seemed loud, but soon it passed for a form of silence. Aircraft landing at nearby Guangzhou Baiyun International Airport from the north frequently shattered any semblance of peace, but due to Chinese New Year, this was intermittent. The walls were thick, and being the last room of a wing, I had only one adjacent neighbor. Some days I heard the faint strains of a clarinet, as someone moved uncertainly through the bars of ‘My Favorite Things’ and ‘When the Saints Go Marching In,’ only to lapse into practicing scales.

On an afternoon of the second week, the phone on the desk rang for the first time, startling me out of my reveries. An odd female voice on the other end informed me that my order was at the door. Putting on my mask, I opened the door to see a little white robot about the size of a 7-year-old in the hall. It would have easily been accepted as a droid extra in Star Wars. Painted with large red characters and blinking blue and white lights, it chattered to itself like an over-rehearsed child about delivery, service, staying in the room, and being safe. A tinted door in its ‘face’ slid open to reveal a chamber containing my online order of “gong bao” chicken and rice. I retrieved the food, the droid’s face closed, and it turned and sped down the hall, illuminating the walls and chattering bossily about keeping safe.

The Lantern Festival is the last day of Lunar New Year holidays. Families gather and eat elaborate dishes and exquisite, sweet dumplings that dissolve on the tongue. The hotel’s deputy general manager asked if a TV crew could interview me on such an auspicious day. To most Chinese, the idea of spending Lantern Festival in isolation would be as odd as a New Zealander deciding Christmas was the ideal time to be in isolation. I agreed, reluctantly shaved off my two-and-a-half-week-old beard and ironed a shirt. An hour later there was a knock at the door, and forgetting to put on my mask, I opened it to reveal a posse of hazmat-swathed journalists bristling with cameras and microphones. They recoiled from me in unison while exhaling, ‘Your mask, your mask’ in chorus. After putting on a mask I reopened the door, trying my best to summon up a surprised expression with only my eyes. My interview began: ‘How have you coped? Has the hotel been helpful? How is not being able to leave your room at all? Why did you come back to China?’ They seemed genuinely curious. I mentioned in particular the deputy general manager who had been keeping in touch by WeChat and arranged my exercise bike. As they spoke, five droids pushed chattering past them, and their mechanical faces opened to reveal bowls of dumplings and a steaming tureen of chicken and vegetables. The journalists’ warmth and openness reminded me of one of the shared qualities I had long noticed in people in China, empathy. The people here have been through so much struggle and suffering, not just in the colonial and warlord years and the upheavals of forming the People’s Republic, but in recent generations, fielding the onslaught of economic reform and constant change. It has forged in many a deep sense of human empathy. It is perhaps this more than anything that holds China together.

The difference between New Zealand and developing countries like China is that once Covid-19 has passed, many in the West will return to a good, healthy, safe life, while so many more in China will continue to struggle on the fringes of poverty. China’s coastal cities like Guangzhou are exceptions of wealth and opportunity in a country where 550 million people earn under $150 a month. China has alleviated poverty and created commonwealth to unprecedented degrees, but it still had much work to do.

After three weeks, it was good to leave my hotel room and get on a flight home to Beijing. The same anxiety I had felt before leaving Auckland rose in me. Do I have all the right health documents, is the new QR code on my phone going to work and allow me to fly? All went smoothly. Upon landing in Beijing, I was called to the front of the plane by an amiable policeman who said he needed to register me at the airport police office. A colleague registered me again an hour later in my district in central Beijing, just northwest of the Forbidden City. Relieved to be home, I entered my apartment for seven more days’ isolation, vowing not to lose my inner focus, and grateful that I was back in my vocation. As night fell, so too did a light dusting of snow, highlighting the eves of the ancient courtyard houses in my neighborhood.

The article was first published on The New Zealand Listener on March 20. Read the author’s account of going into his 21-day quarantine in China here.