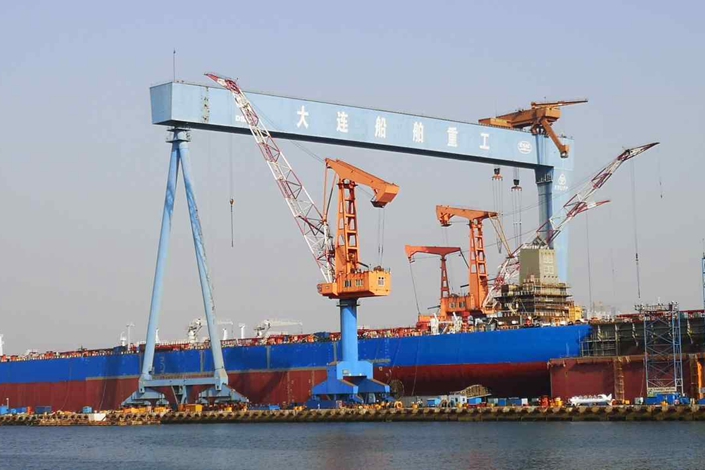 China State Shipbuilding operates a shipyard in the northern port city of Dalian.

(Nikkei Asia) — China State Shipbuilding Corp. Ltd. (CSSC) emerged as the world’s top manufacturer of commercial vessels in 2020 based on new orders, with its ascent driven by Beijing’s determination to become a maritime powerhouse.

Workers were attaching parts to vessels at a CSSC shipyard in Dalian, a northern port city, when this reporter visited in mid-March.

"We’ve been busy these days, and my monthly pay has increased by several hundred yuan over the past year," a 50-something employee said.

“Demand has softened amid a global supply glut, and the coronavirus pandemic discouraged companies from placing new orders,” an industry source said.

Yet China was a bright spot, nabbing about 44% of global orders in volume terms and taking the No. 1 slot for the first time in four years. With a decline of only 1.5%, China remained unscathed compared with South Korea, which slid 32% and sank to second place, and Japan, which tumbled 53%.

By company, CSSC secured just over a 20% share of the global market in 2020, surpassing Korea Shipbuilding & Offshore Engineering Co. Ltd., a member of Hyundai Heavy Industries Group, to grab the top spot. CSSC received an order for 50 vessels from a state-run customer in March.

The momentum for Chinese shipbuilders and the declines of peers in South Korea and Japan are attributed to government backing, or the lack of such support.

CSSC has won over European and U.S. maritime shippers with cost competitiveness, offering rates about 10% below those of rivals. The company — created through the November 2019 merger of its predecessor, the industry leader at the time, and second-place China Shipbuilding Industry Corp. — increasingly does business with local freight forwarders.

The shipbuilder also benefits from making its vessels more accessible. In this scheme, CSSC ships are bought by leasing companies that are often group members of state-owned banks, and the vessels are leased to shipowners in China and beyond that are having difficulty obtaining financing. Bank loans for the shipping industry are declining worldwide, but leasing in China is rising.

In Japan, regional banks give support to local shipbuilders, but only those who pass strict lending screenings.

"The generous support from Beijing poses a threat to us," said a senior executive at a Japanese shipbuilder with a Dalian location.

China’s assistance extends beyond commercial ships. Beijing under President Xi Jinping has embraced construction of military vessels. China’s navy possessed an estimated 360 battle force ships in 2020, a 41% jump from 2015, the Congressional Research Service said. The fleet is expected to reach 425 by 2030, most of the new vessels built by CSSC.

Having built China’s first domestically made aircraft carrier, CSSC is thought to be constructing another such ship now. Lifted by vast demand from the private and public sectors, the company recorded 20 billion yuan ($3.07 billion) in net profit and income tax for 2020, a 39% surge on the year.

CSSC faces a challenge in curbing labor and other costs. Under pressure to add jobs while enjoying preferential order treatment, the company plans to boost hiring by 30% in 2021 despite rising sales and administrative expenses.

With the yuan strengthening against the dollar of late, Chinese shipbuilders are slowly raising prices. CSSC has started taking rationalization steps, including an 18 billion yuan plan for consolidating and closing shipyards. But higher manufacturing costs could undermine its competitiveness.