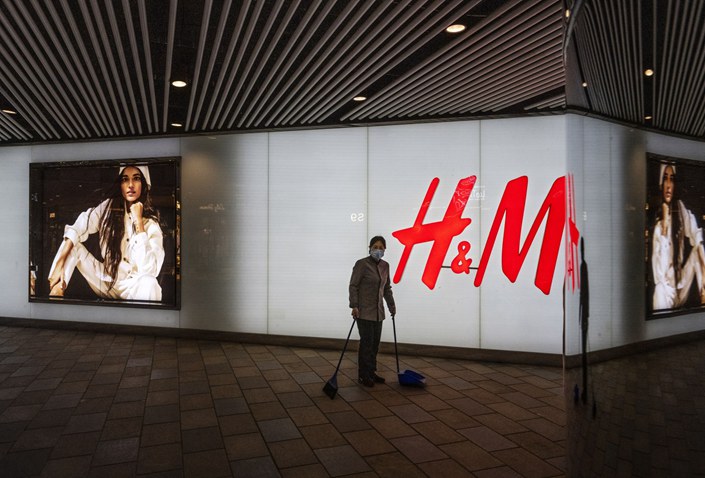 A worker sweeps the area outside the flagship store of clothing brand H&M at a shopping area on March 25 in Beijing. Photo: Bloomberg

(Bloomberg) — Hennes & Mauritz AB stores in some parts of China are being closed by their landlords, threatening to disrupt the clothing giant’s growth in its fourth-biggest market as Beijing’s growing sensitivity toward criticism of the human-rights situation in Xinjiang ensnares Western companies.

At least six stores in the lower-tier cities of Urumqi, Yinchuan, Changchun and Lianyungang have been shut down by the owners of the properties, according to mall operators in those areas who were contacted by Bloomberg. Local media have reported more closures, with pictures showing H&M’s brand billboards being removed.

The closures are the latest escalation in the backlash against an undated H&M statement on its website that expressed concern about reports of forced labor in the far west Xinjiang region, a major producer of cotton used in the global apparel supply chain.

Some of the mall operators said the decision to shutter was made by the landlords because of disrespect shown by H&M toward China. It’s unclear how long the closures will last for.

China’s response to H&M is markedly stronger than its previous pushback when foreign brands crossed political lines and the Swedish retailer is at risk of becoming a corporate casualty of Beijing’s heightened sensitivity toward criticism from Western governments and entities. China accounted for 5.2% of H&M’s total sales in 2020, the fourth-biggest country market after Germany, the U.S., and the U.K.

Other Western brands like Nike Inc. and Adidas AG have also drawn consumer ire for their pledges not to use Xinjiang cotton, but H&M appears to have suffered the brunt of the fallout after the statement was called out by the Communist Youth League and the People’s Liberation Army. Its outlets have also vanished on Apple Maps and Baidu Maps searches, making it hard for Chinese consumers to locate stores, and it’s been removed from Chinese e-commerce platforms.

A representative at H&M China didn’t immediately respond to requests sent by Bloomberg, while a spokesperson in Europe said the retailer has no comment to make currently. The company has 505 stores in China as of Nov. 30.

The corporate reprisal comes as the U.S., the U.K. and others criticize alleged human rights abuses of Muslim-minority Uygurs in Xinjiang, and tensions between China and the West simmer. U.S. Secretary of State Antony Blinken, National Security Advisor Jake Sullivan and their Chinese counterparts traded criticism on human rights and national security issues during a two-day face-to-face meeting earlier this month in Alaska.

While the H&M statement appeared to have been removed from the website of the Swedish multinational as of Friday, a separate link on its homepage expressing the same stance on Xinjiang cotton was still active.

H&M had said in the statement that it’s “deeply concerned by reports from civil society organizations and media that include accusations of forced labor and discrimination of ethnoreligious minorities.”

Global brands are facing a dilemma over whether to embrace cotton from the Xinjiang region or risk being boycotted in the world’s second-biggest economy. Meanwhile, Chinese apparel makers have seized the opportunity with statements supporting Xinjiang cotton, boosting local companies from sportswear maker Anta Sports Products Ltd. to leisurewear brands including Zhejiang Semir Garment Co. Ltd.

The U.S. on Friday accused China of a state-run “corporate and consumer boycott” against companies that refuse to use cotton from Xinjiang. China has targeted American, European and Japanese businesses that are avoiding Xinjiang cotton, State Department deputy spokeswoman Jalina Porter told reporters on Friday.

“We can’t tolerate any forces bringing shame on and tarnishing the pure and flawless Xinjiang cotton,” Gao Feng, a spokesman for the Chinese Commerce Ministry, said at a briefing on Thursday. “Chinese consumers have acted in response to the so-called business decisions made by some companies based on false information. We hope the relevant companies will respect market laws, correct wrong practices, and avoid the politicization of commercial issues.”

While China realizes it’s unlikely to silence criticisms from the West by fighting back, its more aggressive stance is mainly to show a domestic audience that the Communist Party is “the best and most determined defender of China’s interests,” said Shi Yinhong, director of Renmin University’s Center on American Studies in Beijing.