Traders Are ‘Glued to Their Screens’ and Set for Volatile Open 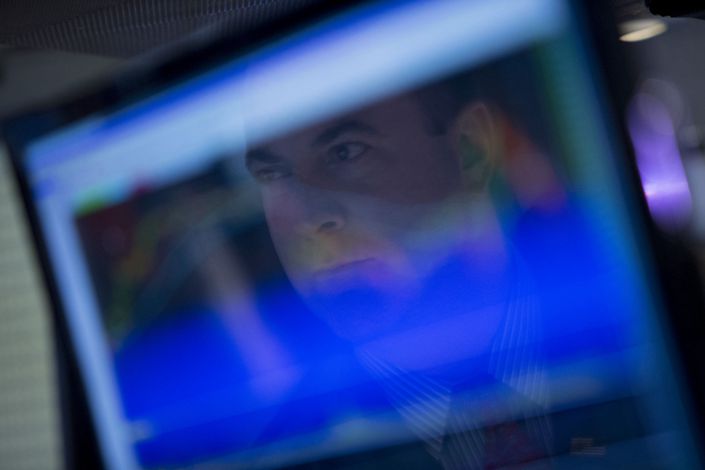 A trader is reflected on a computer screen while working on the floor of the New York Stock Exchange in New York in August 2013. Photo: Bloomberg

(Bloomberg) — Global traders are bracing for what’s shaping up to be one of the most anticipated opens for U.S. equities in months following an extraordinary $20 billion wave of block trades Friday that rattled investors worldwide.

Archegos Capital Management LLC — the family office of Bill Hwang — was behind the sales, dumping shares of Chinese tech giants and U.S. media conglomerates, according to two people directly familiar with the trades. While some of the stocks targeted in the block trades initiated by Goldman Sachs Group Inc. and Morgan Stanley rebounded at the end of Friday’s session, ViacomCBS Inc. and Discovery Inc. didn’t. They posted their biggest daily losses ever.

Morgan Stanley traded about $13 billion including Farfetch Ltd., Discovery, Baidu Inc., and GSX Techedu Inc., while Goldman sold $6.6 billion worth of shares of Baidu, Tencent Music Entertainment Group and Vipshop Holdings Ltd. That move was followed by the sale of $3.9 billion of shares in ViacomCBS Inc. and IQiyi Inc., according to an email to clients seen by Bloomberg.

Morgan Stanley was shopping a large block of ViacomCBS shares on Sunday, according to a person familiar with the matter. About 45 million shares were offered on behalf of an undisclosed holder, the person said.

“The correction was not structural,” he said.

“Traders everywhere know the story and will be glued to their screens,” he said.

The possibility of additional block trades still looms over the market, while the traditional end-of-quarter volatility may contribute to sharper swings on high-flying stocks. ViacomCBS and Discovery have rallied this year.

“What most people appear to have missed is that both of these companies have seen their share prices almost quadruple since October last year,” Michael Hewson, chief market analyst at CMC Markets UK, said in a note on Sunday, referring to ViacomCBS and Discovery.

The selloff on the two media companies started earlier last week, when ViacomCBS reported an offering of $2 billion in shares after closing at a record high. The stock fell 9.1% the following day. On Friday, a downgrade by Wells Fargo and the large block trades compounded the selling pressure.

Viacom and Discovery shares are also echoing volatility in a host of companies that soared on lockdown trades, including Zillow Group and Peloton Inc. and to some degree the entire blank-check SPAC space. Earlier this month, data compiled by Susquehanna International Group showed that volatility futures expiring three months from now were hovering 20% above the average level or prior instances when the VIX traded at 20.

“We have seen an increase in volatility in equities capital markets, tech, working-from-home names with retail stepping back and more rotation to value in the last few weeks,” said Emmanuel Cau, a strategist at Barclays. “It may have hurt a number of funds that were overly exposed to these trades.”

U.S. equities notched their biggest gain in three weeks on Friday and the S&P 500 closed 1.7% higher as the bull market celebrated its first anniversary since hitting pandemic-era lows.

“The markets could start trading in a friendly manner at the beginning of the week,” said Andreas Lipkow, Comdirect Bank strategist. “Although there is currently some major profit-taking and unusual block trade activities, these market asymmetries can currently still be processed well.”