By Fumi Matsumoto and Iori Kawate 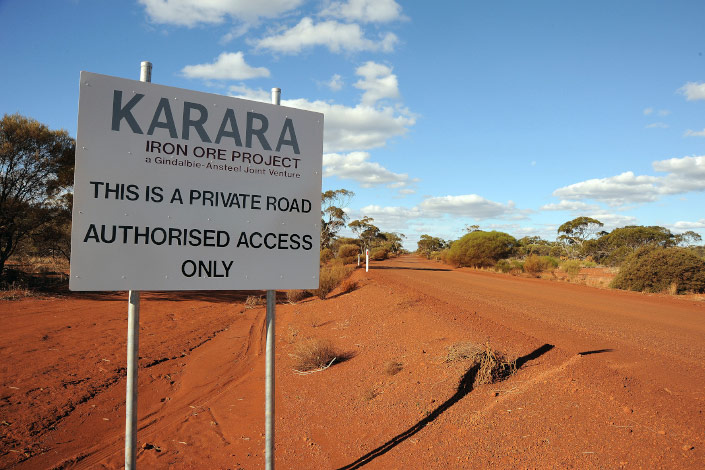 A sign marks the entrance to an iron ore project in Australia in June 2010. Photo: VCG

(Nikkei Asia) — While strained diplomatic ties have taken a toll on bilateral trade, China’s enduring appetite for infrastructure has kept iron ore prices high, and is expected to lift Australia’s resources and energy exports to record levels for the 12 months ending June.

Exports in this sector are on track to hit A$296 billion ($226 billion) for the fiscal year, Australia’s Department of Industry, Science, Energy and Resources announced Monday. Exports of iron ore — which makes up roughly 60% of all Australian shipments to China by value — are expected to jump 31% on the year to A$136 billion, according to the release.

The forecasts show how closely Australia’s commodity-driven economy remains linked to its biggest export market, even amid a war of words over the origins of the novel coronavirus.

China has been gorging on commodities for an infrastructure buildup meant to stoke an economic recovery from the coronavirus pandemic. But global supply has struggled to keep up, particularly with Brazilian output still under where it was before the collapse of a mining dam in 2019.

“The iron ore price surged in December and January, and is now at its highest level since 2011,” the ministry said in a quarterly report.

Meanwhile, Australia’s coal exports have been relatively sluggish. Shipments of metallurgical coal, which is used in steelmaking, is expected to fall 34% to A$23 billion, and thermal coal for power generation by 29% to A$15 billion.

The long-term outlook for thermal coal is unclear, as companies and government around the world shy away from the carbon-intensive fuel.

“A surge in exports earnings of metals used in technologies central to the world energy transition — copper, lithium and nickel — will replace the fall in thermal coal earnings arising from that transition” by the year ending June 2026, the ministry report said.

Chinese restrictions on Australian coal, adopted after Canberra in April 2020 called for an independent inquiry into the origin of the coronavirus and Beijing’s initial response to its outbreak, have only squeezed shipments further in recent months.

The Australian ministry believes metallurgical coal prices have recovered somewhat from losses caused by unofficial Chinese import restrictions. But the extent of further official and unofficial measures by China still “poses a downside risk to the forecasts,” it said.

Other Australian exports have been targeted as well. China halted some Australian meat imports in May, citing problems with labeling and health certificates. China also slapped a more than 80% anti-dumping tariff on Australian barley, and imposed long waits on Australian rock lobster at customs. barley and frozen beef

According to China’s customs authority, imports of Australian slumped 45% and 22%, respectively, in 2020. Much of this was offset by a 16% surge in iron ore imports. Still, overall imports from Australia dropped 4% last year, and many Australian producers suffered greatly from losing access to their largest market.

China continues to slap trade penalties on Australia. On Friday, China’s Commerce Ministry decided to impose an anti-dumping tariff of up to roughly 200% on Australian wine for five years, formalizing curbs that have been in place since November.

"This decision which has been taken by the Chinese government is extremely disappointing and completely unjustifiable," Australian Trade Minister Dan Tehan told reporters Saturday, adding that he will consider taking the matter to the World Trade Organization.