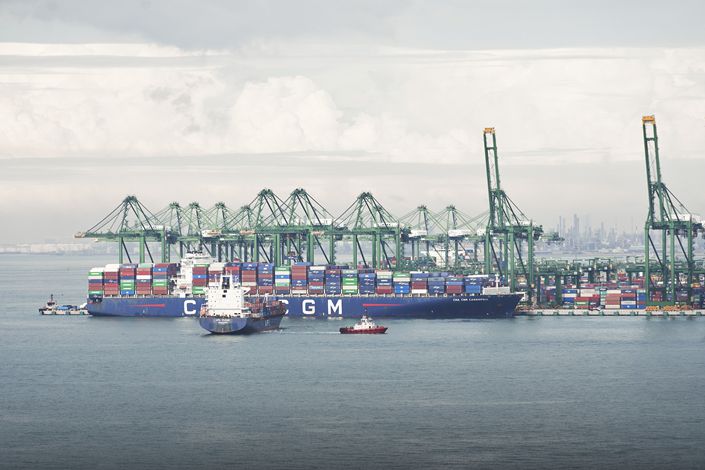 A container ship sits docked at the Port of Singapore on Nov. 23. Photo: VCG

Frederic Neumann is co-head of Asian Economic Research at HSBC.

It’s far too early to proclaim victory over the virus. The fight rages on, and human suffering endures. Yet, faintly, one can make out the first rays shining through the dark clouds of the pandemic. Most of Asia has brought recent outbreaks under control, and the arrival of vaccines offers, even if haltingly, the hope that Covid-19 will be vanquished in due course. Yet, Asia faces considerable economic challenges that will require determination and imagination to tackle.

The past year, for all its challenges, has underlined Asia’s economic resilience. Take India. After losing nearly one-quarter of its GDP during the initial outbreak, by the end of 2020 its economy rebounded to be a smidgen larger than during the prior, Covid-19-free year. Elsewhere, excluding China and Japan, the region’s economy contracted by a ‘mere’ 2.1% last year — a number that masks enormous variations among individual markets, to be sure, but signifies resilience on a broad scale.

Three explanations come to mind. First, most economies were extraordinarily successful in containing the virus. While this came at the cost of many restrictions, especially on international travel, it nevertheless helped cushion local demand over time.

Second, China’s swift rebound, in and out of the pandemic before anyone else, supported growth across the region from South Korea to Thailand, and Malaysia to Taiwan. Commodities, too, surged back, as China’s economy kicked up a gear, benefiting Indonesia and Australia and many places beyond.

Third, exports — that essential fuel to Asia’s economic engine — soared. The world may have sharply curtailed its demand for services during the pandemic, but its appetite for goods, many manufactured in Asia, turned voracious. Furniture, electronics, home appliances: the essential goods of lockdowns everywhere, were in such demand, and still are, that containers to transport them are in short supply.

It’s tempting, therefore, to believe that Asia’s strength will only continue to build over the coming quarters. And the fading threat of the virus should certainly abet the recovery.

But it’s important to remember that the three pillars of Asia’s resilience will look less sturdy over the coming year.

For one, while having contained the virus in many places amiably, natural immunity to Covid-19 is low. In addition, the vaccine roll-out is proceeding haltingly, trailing efforts the U.S. and the U.K., in particular, and even lagging behind continental Europe. While herd immunity from a combination of natural resistance and vaccination might be achieved in the West by this summer, most of Asia will reach the goal only in the first half of 2022.

Next is China. Its recovery has been stupendous. But momentum is bound to fade. Read closely the speeches, documents, and proclamations during the recent National People’s Congress and one conclusion stands out: the priority is shifting from growth to the curtailment of debt and a return to financial prudence.

Exports, too, may fare less impressively over the coming year. Consumers everywhere, freed from home confinement, will splurge on services, savoring travel, entertainment, and hospitality, instead of goods. Even assuming that U.S. households spend robustly over the remainder of the year, spurred on by a generous fiscal package and pent-up savings from the prior year, their expenditure on goods may contract, if history is any guide.

Resilience, in short, doesn’t in itself guarantee that Asia will come roaring out of the pandemic.

This will require a determined approach. Policymakers cannot assume that growth will spring back to accustomed levels just because the virus may begin to recede in the coming quarters.

For example, the headlines about Asia mask the dislocation and pain that has occurred on the ground. Small businesses have been decimated, millions put out of work, lives disrupted. And unlike their counterparts in more advanced economies, few entrepreneurs and households have received generous fiscal support. The economic scars from the pandemic are thus likely to linger longer in Asia than elsewhere.

One ready prescription, therefore, is that governments in the region will need to maintain accommodative policies for quite a while longer. A clear risk is premature tightening, whether fiscal or monetary.

But even this is becoming increasingly tricky. The surge in U.S. yields is tying the hands of central banks in Asia. As capital flows back into the dollar, exchange rates become more volatile, narrowing the room for monetary officials in emerging Asia to provide further accommodation. As funding costs climb locally in tandem with U.S. rates, the fiscal runway is getting shorter, too.

That leaves another option, one all too easily overlooked amid the more pressing issue of tackling the pandemic: structural reform. By laying out determined roadmaps — not broad canvasses of intent but detailed itineraries of legislative steps — Asia could boost its growth by unleashing its stupendous savings and entrepreneurial energy.

Many governments have already begun. Indonesia is implementing a wide-ranging labor reform law and opening up new sectors for investment, notably in the electric vehicle supply chain. India has promised more funds for public infrastructure investment and is accelerating its push to attract global manufacturers. China’s leaders, for all their caution on further stimulus, have laid out ambitious reform plans at their recent gathering, stretching from smarter urbanization to rural development.

These point in the right direction. But far more will need to be done. State-owned enterprises, mostly inefficient and stifling, distort the playing field too greatly across the region. Access to affordable quality education and health care remains too narrow. And trade and investment barriers in many sectors remain insurmountable, impeding local competition and curtailing the broader economic gains that can be reaped.

Amid the enduring hardships, reforms in these areas will be hard to undertake. But without them, the economic travails will only persist. It’s time to take the plunge.