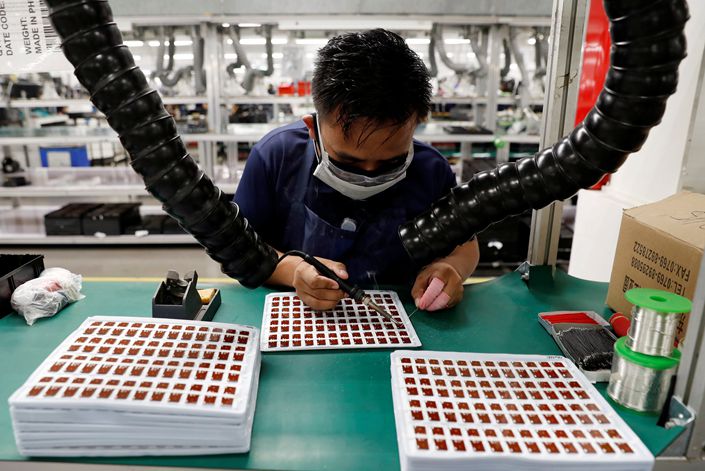 An electronics factory in the Philippines. Photo: Reuters

Nikkei Asia —The Philippines has formally expressed interest in joining the Trans-Pacific Partnership, with the goal of building new relationships with countries outside its existing bilateral free trade agreements.

Ramon Lopez, secretary of trade and industry, sent a signed letter of intent to New Zealand, the depositary nation of the trade bloc, formally the Comprehensive and Progressive Agreement for Trans-Pacific Partnership.

Lopez asked about the process of joining the CPTPP as well as how it operates, Ceferino Rodolfo, an undersecretary, said recently.

“It would be critical for us to engage the CPTPP members that are currently not part or not a partner of the Philippines in FTA,” Rodolfo told reporters.

“New markets there would be Canada, Mexico, Peru and Chile, with which we still don’t have an FTA,” Lopez told Nikkei Asia. “And we expect more countries joining, even the U.K. and possibly the U.S. may be back under the new Biden administration, and China.”

Diversified trade ties could allow the Philippines to be less dependent on China amid simmering tensions, most recently over a flotilla of 200 Chinese vessels surrounding a contested reef in the South China Sea. China is among the country’s top export markets and is its largest trading partner overall.

The U.S. left the original TPP under then-President Donald Trump immediately after his inauguration in 2017. The current version was signed in 2018 by the other 11 countries: Japan, Canada, Mexico, Chile, Peru, Australia, New Zealand, Brunei, Malaysia, Singapore and Vietnam.

The original 12 countries, including the U.S., had held a summit in Manila in 2015. Then-Philippine President Benigno Aquino had expressed an intention to join the TPP, but the country never did.

Its recent interest appears motivated by a need to cultivate domestic manufacturing, including the automotive sector.

Just this year, the Department of Trade and Industry imposed provisional safeguard duties of 70,000 pesos ($1,441) on imported passenger cars and 110,000 pesos on imported light commercial vehicles.

The safeguards will lead to a more “technologically advanced” domestic industry, Lopez said in a news release.

And since 2016, automakers with a certain level of in-country production have qualified for tax incentives under the Comprehensive Automotive Resurgence Strategy program, or CARS.

The International Monetary Fund estimates that Philippine real gross domestic product shrank 9.6% in 2020 — the worst showing among Southeast Asian countries covered. The Philippines is attempting to spark an economic recovery and aims to bring about long-term job creation.

The Philippines was one of the 15 countries to sign the Regional Comprehensive Economic Partnership agreement this past November. By joining the CPTPP, the Philippines would further expand its supply chain covered by free trade agreements.

The U.K., which exited the European Union, has formally applied to join the CPTPP. Other nations, such as China and Thailand, have also expressed interest. But the hurdles to joining are high, owing to the requirement to adhere to stringent rules, such as those governing intellectual property.