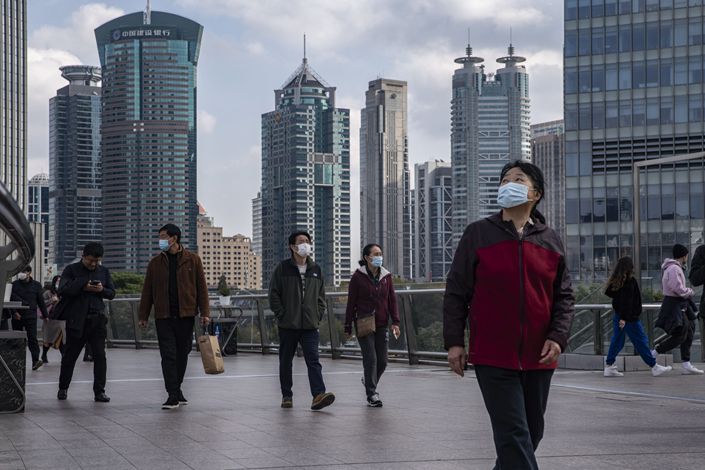 Pedestrians walk through the Lujiazui financial district in Shanghai on Dec. 1. Photo: Bloomberg

(Bloomberg) — China will drive global economic growth in the coming years as the world recovers from a pandemic that has killed 2.9 million people, the International Monetary Fund (IMF) predicts.

China will contribute more than one-fifth of the total increase in the world’s GDP in the five years through 2026, according to Bloomberg calculations based on IMF forecasts published Tuesday. Global GDP is expected to rise by more than $28 trillion to $122 trillion over that period, after falling $2.8 trillion last year in the biggest peacetime shock to output since the Great Depression.

The U.S. and India will be the second and third-biggest contributors to global growth in the period, according to the IMF, with Japan and Germany rounding out the top five.

Overall, the IMF forecasts that the global economy will expand 6% this year, before slowing toward a 3% pace by 2026. It also warned that growth in the coming expansion may be unevenly spread, with developing economies expected to have bigger losses and slower recoveries.

“Income inequality is likely to increase significantly because of the pandemic,” the IMF said in its World Economic Outlook report. “Close to 95 million more people are estimated to have fallen below the threshold of extreme poverty in 2020 compared with pre-pandemic projections.”

One reason for the divergence is the faster-than-expected recovery in the U.S. It’s the only large economy where the IMF’s GDP forecast for 2022 is actually higher now than it was before the pandemic.