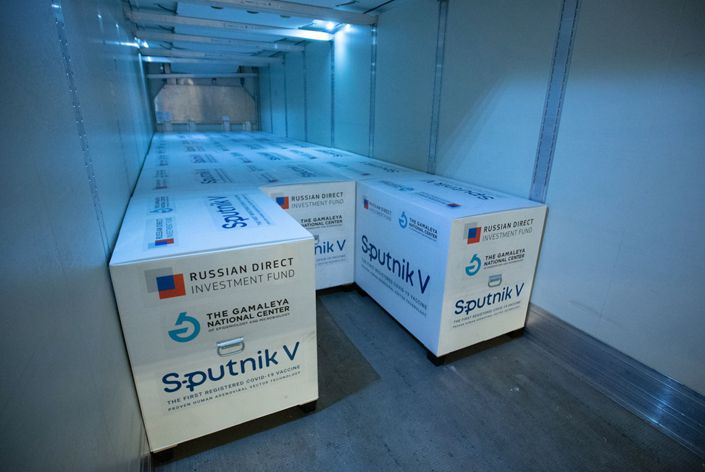 Boxes of the Russian-developed Sputnik V Covid-19 vaccine sit in a refrigerated truck at the cargo terminal at Sheremetyevo International Airport OAO in Moscow on Feb. 11. Photo: Bloomberg

(Bloomberg) — Russian officials have slowed the authorization of China’s CanSino Biologics Inc.’s Covid-19 vaccine, the only foreign inoculation that is undergoing domestic testing, as they’re confident they can vaccinate the public using homegrown shots.

Registering the single-shot vaccine is taking so long because local authorities are prioritizing Russian-developed inoculations, according to three people familiar with the situation who asked not to be named because the information is not public.

When CanSino’s local partner, Petrovax Pharm LLC, filed for approval in November, it wasn’t clear how quickly Russia would be able to scale up production of its domestic vaccines, according to one of the people, who is a government official. But there isn’t any need for foreign doses currently, the person said, adding that the CanSino shot may get approval later.

Foreign medical supplies often need more time to get registered, according to a spokeswoman for Petrovax, which is working on a domestic clinical trial of the Chinese vaccine. Russia’s Health Ministry didn’t respond to messages and calls seeking comment. CanSino didn’t reply during a public holiday in China.

Russia and China have aggressively marketed their vaccines abroad as Western governments face accusations of hording inoculations at the expense of poorer nations. In a sign that Moscow and Beijing are also playing politics with the vaccines, neither has authorized any foreign shots.

“I can say with confidence that our vaccines are the best,” President Vladimir Putin said last month on state TV about the three available Russian vaccines after receiving his first dose, without disclosing which shot he chose. “In principle, any of them can be taken, they are at the level of the world’s best.”

That differs from the approach used for the three Russian vaccines, which were approved for emergency use before they started final stage trials.

Preliminary data shows that CanSino’s vaccine has an efficacy rate of 65.7% and it has been approved for use in China, Mexico, Pakistan and Hungary.

Petrovax, owned by Russia’s richest man Vladimir Potanin, is investing 2 billion rubles ($26 million) in a new production line to offer the shot in Russia and for export.

Even as Russia increases output of its domestic options, the country is lagging in its vaccination campaign, sparking fears it could face a third wave of Covid-19 infections. Only about 4.7% of the population has had a first dose of vaccine, according to RBC newspaper. That compares to 12% in Turkey, 32% in the U.S. and nearly half of the U.K.

Russia doesn’t need to register a foreign vaccine because it already has several types available, according to Dmitry Kulish, a biologist and professor at Moscow’s Skoltech University who has worked in the pharmaceutical sector.

“People should know that they are getting a good product and not bother so much with choices,” Kulish said.