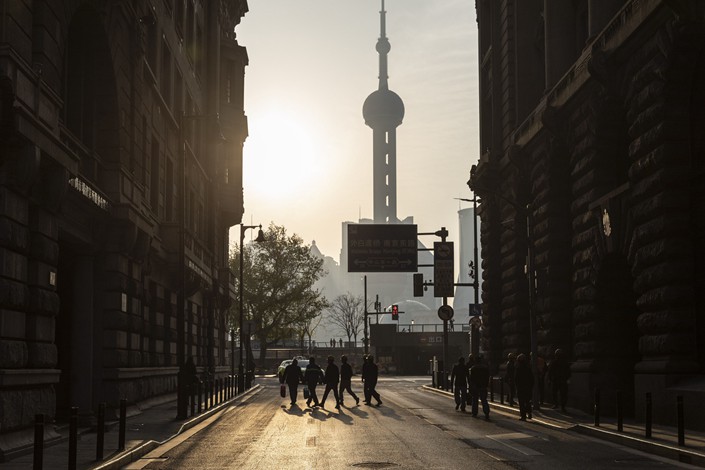 Construction workers cross a road near the Bund in Shanghai on April 10. Photo: Bloomberg

(Bloomberg) — Concern over one of China’s largest bad-asset managers turned into panic on Tuesday as investors considered the worst-case scenarios for the company’s outlook.

Bonds linked to the company have plunged this month after China Huarong failed to publish its 2020 preliminary results by the March 31 deadline, with Caixin attributing the delay to plans for a significant financial restructuring. The stock has been suspended in Hong Kong since April 1. The company has until the end of the month to release its final earnings report.

In a commentary dated Monday, Ling Huawei, managing editor of Caixin Media and Caixin Weekly, openly discussed the possibility of a Huarong bankruptcy.

China Huarong has been under a shadow since its then chairman Lai Xiaomin came under investigation in 2018. Lai was put to death earlier this year for bribery after a brief trial.

“Huarong is a $22 billion curve and as a distressed situation it dwarfs anything that we have seen in the Asia credit market before,” said Owen Gallimore, head of trading strategy at Australia & New Zealand Banking Group. “This is a fatal event for a few trading desks and small funds.”

China Huarong and its subsidiaries have some $42 billion worth of offshore and local bonds outstanding and 41% of that will come due by the end of next year, according to Bloomberg-compiled data. Dollar bonds make up about $22 billion of its outstanding notes.