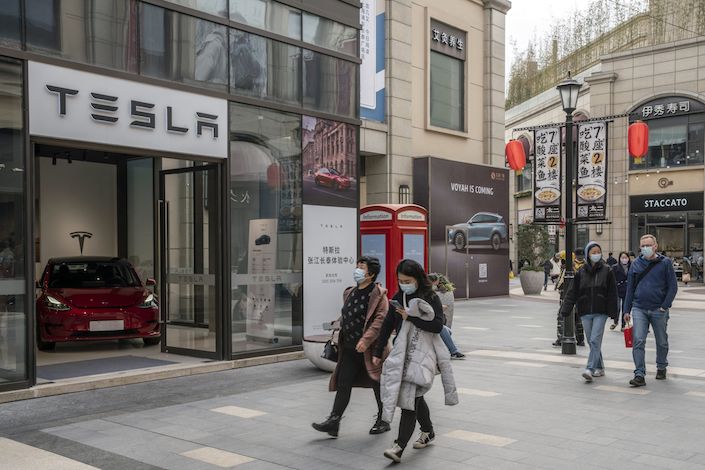 Shoppers walk past the Tesla Inc. showroom at the Chamtime Plaza in Shanghai

Tesla Inc. has pledged to store any data it collects in China in the country, a month after its cars were banned from military complexes and housing compounds because of concerns about sensitive information being collected by cameras built into the vehicles.

“Tesla China is a company that’s based here and must abide by all Chinese laws and regulations,” Grace Tao, the electric carmaker’s China head of communications and government affairs, said on the sidelines of a meeting that the country’s top planning body held with U.S. companies in Beijing on Tuesday. “In fact, our data will be very well protected. Chinese data will be stored in China.”

China is an increasingly important market for Palo Alto, California-based Tesla and its estimate-smashing deliveries of EVs in the first quarter suggest boss Elon Musk’s bet on growth in Asia’s biggest economy is starting to pay off.

But it hasn’t been all smooth sailing. After its EVs were banned from military complexes in March, Musk strenuously denied the company would ever use a vehicle’s technology for spying; earlier this month, Tesla’s Beijing unit said cameras that are built into its EVs aren’t activated outside of North America.

Tesla will always “cooperate with regulatory authorities at all levels so that consumers can enjoy convenience and safety at the same time,” Tao said.

The National Development and Reform Commission held a roundtable meeting on Tuesday and invited senior executives of companies including Qualcomm Inc. and Dell Technologies Inc. to attend. The NDRC’s meeting was to explain the policies in the nation’s 14th five-year plan.