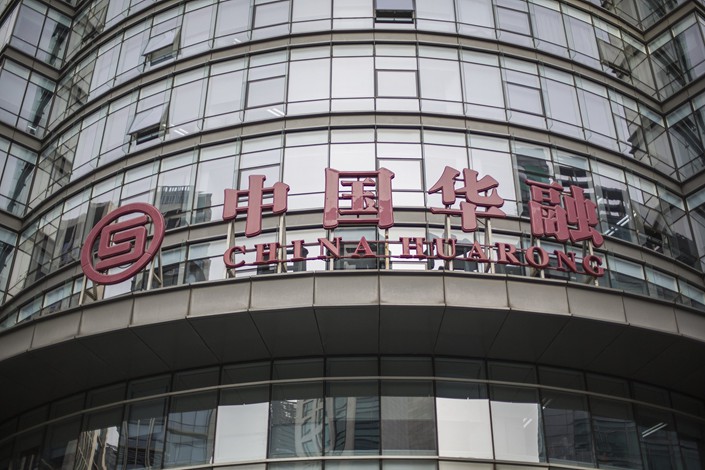 While the speed of China Huarong’s debt rout has jolted some investors, the company has long been a source of potential risk. Photo: VCG

(Bloomberg) — For decades, it’s been an article of faith in China’s credit market: Companies controlled by the central government will get bailed out if they ever run into trouble.

Now investors aren’t so sure.

While China Huarong has said it has access to liquidity and is making payments on time, bond prices suggest investors are bracing for a potential restructuring that would be the country’s most consequential since the financial crisis that gave rise to China Huarong and other bad-debt managers in the late 1990s.

Whether or not that comes to pass, the selloff underscores a historic shift in the world’s second-largest credit market. As Chinese President Xi Jinping dials back support for weaker borrowers to reduce moral hazard, state-owned enterprises have replaced their private counterparts as the country’s biggest source of defaults.

The big question now confronting investors is how much pain China’s government is willing to tolerate as it tries to wean the bond market off implicit guarantees. None of the state-owned companies that have defaulted so far — including Peking University Founder Group Corp., which is ultimately controlled by China’s education ministry — were considered as systemically important as China Huarong.

Chinese authorities have tried to strike a balance between instilling more market discipline and avoiding a sudden loss of confidence that might spiral into a crisis. But the tumult surrounding China Huarong, some of whose bonds are now trading below 80 cents on the dollar, highlights how quickly investor sentiment can deteriorate even at a time when the economy is strengthening.

“China’s credit market is entering a new era as SOEs are emerging as the main source of stress,” said Shuncheng Zhang, an analyst at Fitch Ratings. Whatever the outcome for China Huarong, policy makers will likely allow more defaults in the state sector to reduce moral hazard and cultivate a more mature debt market, he added.

The stakes are high as Beijing considers which companies to support. SOEs had the equivalent of $3 trillion in onshore bonds outstanding at the end of last year, or 91% of the total, data compiled by Fitch show. A small but growing portion of those bonds is now owned by international money managers, after a steady relaxation of China’s restrictions on foreign investment in recent years.

While the speed of China Huarong’s debt rout has jolted some investors, the company has long been a source of potential risk. Its former chairman, Lai Xiaomin, was executed earlier this year for bribery. Under his leadership, China Huarong expanded into areas including securities trading and trusts that were a significant departure from the company’s original mandate of helping banks dispose of bad debt.

This month’s selloff was triggered by China Huarong’s failure to publish 2020 preliminary earnings by a March 31 deadline, which business publication Caixin reported was due to a significant financial restructuring.

Losses in the bonds accelerated on Tuesday — spreading to other Chinese issuers including property developers — as traders circulated a separate Caixin report discussing scenarios for China Huarong that included bankruptcy. The company is still considered investment grade by Fitch, Moody’s Investors Service and S&P Global Ratings, though all three have said they will review their ratings for a potential downgrade.

China Huarong bonds extended declines on Wednesday, with prices falling by as much as 5 cents on the dollar. The yield on a 2022 note has reached 35%, according to data compiled by Bloomberg.

It’s not the first time Beijing has grappled with the risk of credit-market contagion. A surprise onshore default by a state-linked coal producer in November triggered a brief selloff as investors reassessed the creditworthiness of investment-grade Chinese debt. Further defaults, including by prominent chipmaker Tsinghua Unigroup Co. Ltd., also caused short-term market ructions but never came close to precipitating a crisis.

Some level of contagion is actually healthy for China’s bond market as it shows investors are responding to changing levels of risk, according to Charles Chang, an analyst at S&P Global. He said recent SOE defaults have triggered a stronger reaction in bonds of peers than was the case a few years ago.

“The new thinking is that as long as it doesn’t cause systemic risk, there isn’t necessarily a need for a bailout,” said Ivan Chung, an analyst at Moody’s Investors Service. “More SOE defaults are expected to occur in the future but they will likely be concentrated in fiscally weaker regions and sectors with heavy legacy debt and labor burdens.”

It’s unclear whether Chinese leaders have discussed the fate of China Huarong’s bondholders, but there are signs authorities might be preparing to provide support to the company if needed.

The finance ministry is considering transferring its controlling stake in China Huarong to a unit of the nation’s sovereign wealth fund that has more experience resolving debt risks, Bloomberg reported on Tuesday, citing a person familiar with the matter. The finance ministry aims to complete a transfer in the next few months, though any final decisions will require approval from China’s State Council, the person said.

“The transfer, if realized, may offer more flexibility in financial support to Huarong,” said Bloomberg Intelligence analyst Dan Wang. “But it also indicates that Huarong’s debt risk may be much higher than the market had previously expected.”