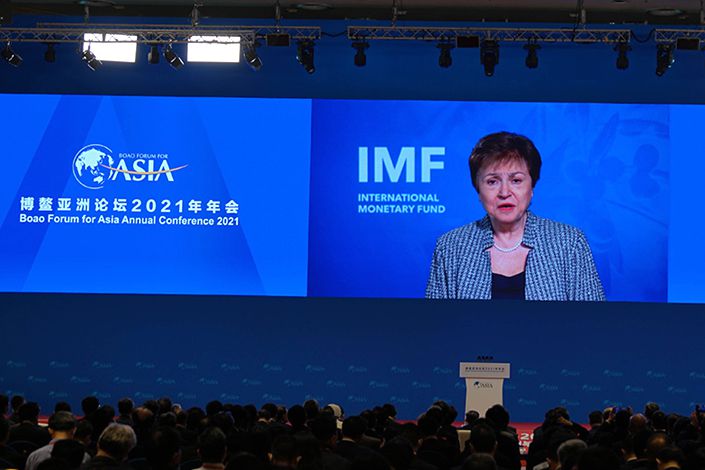 Today, we face overlapping global changes — and each is an opportunity to build forward to a better world. Let me name three.

The first is the shift from deep recession to recovery.

Our most recent forecast puts global growth at 6% this year and 4.4% in 2022, thanks to the extraordinary interventions by governments, and spurred by the prospect of expanding vaccinations.

But we must not take the recovery for granted — there is a dangerous divergence in economic fortunes across and within countries. So long as the crisis is with us, vulnerable households and viable firms will need continued support.

As recovery takes hold, governments can gradually scale back support programs — but scale up targeted hiring subsidies and retraining and reskilling. This is particularly important for low-skilled workers, youth and women, who have borne the brunt of the crisis.

The second major change is the digital transformation that has been accelerated by the pandemic.

China has made great strides reshaping its own economy based on technology, and now other emerging markets are getting a push from the same digital engines. Among the economies that have the largest information and communication technology sector by share of GDP — 13 of the top 30 are in the emerging world.

To further seize this opportunity, governments should scale-up smart public investments — especially in the digital skills and infrastructure to build a 21st century workforce.

The third major change affecting the entire world is the pivot to low-carbon and resilient growth in response to climate change. We welcome China’s commitment to reach net-zero by 2060 — and other major economies are making similar pledges.

The green investments needed to get there can be a quadruple win — good for people, for our planet, for growth, and for jobs. Our analysis shows a coordinated green infrastructure push combined with carbon pricing, could boost global GDP in the next 15 years by 0.7% per year — and create millions of jobs.

In a world of change, one thing remains constant — the importance of solidarity between countries. This has been a key feature of the crisis — not just the exceptional fiscal and monetary measures, but also initiatives such as the Common Framework for orderly debt resolution, and the possible new SDR allocation of $650 billion from the IMF.

By further strengthening this kind of global cooperation, we can turn a world of change into a world of opportunity for all.

This article was based on Georgieva’s remarks for the opening plenary of Boao Forum for Asia Annual Conference 2021.