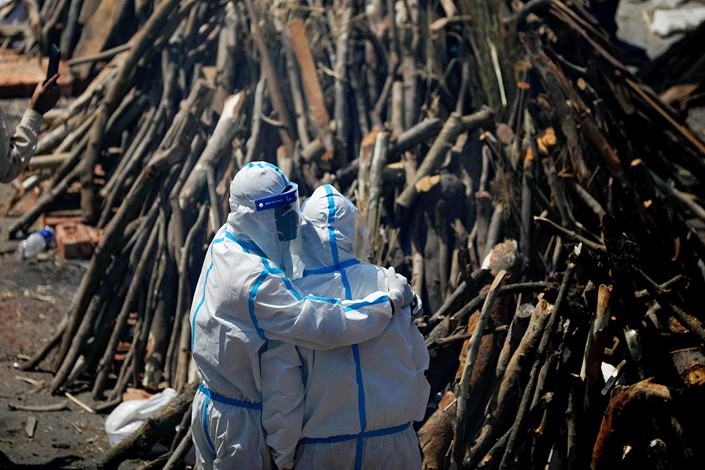 India reported 346,786 new Covid-19 cases over a 24-hour period as of 8 a.m. local time on Saturday, taking the country’s total caseload to 166,104,881. As the infections continue to surge, the death toll has also increased sharply.

A double mutant variant of the coronavirus, B.1.617, was detected in India in October 2020, which carries the mutations of E484Q and L452R in spike protein part of the pathogen. Based on genomic data, the transmissibility of B.1.617 is close to B.1.17 (British mutant) and higher than B.1.351 (South African mutant). Several countries have now imposed bans on flights from India. As of Tuesday, the B.1.617 variant has been detected in more than 20 countries, none of which had a major outbreak similar to the one in India.

Since April 16, the daily death toll in India exceeded 1,300, reaching a new high after the outbreak, a trend that corresponds to the gradually increasing proportion of B.1.617 in India. By Sunday, the daily death toll had jumped to nearly 2,000. The main reason behind this rise is the strained health care system. When even the oxygen supply in short supply, many young patients are likely to die, who could have otherwise survived. What India needs more than any other medicine right now is oxygen, which would reduce the death rate among young patients.

The total infection rate in India stands at 1.16% as of Saturday, according to official data.

At the current rate of vaccination, it will take decades to reach the 70% level required for herd immunity and there will be at least millions of additional deaths. If the situation becomes similar to that of the 1918 influenza pandemic, the government will inevitably be held accountable by the people. Thus, there is still great uncertainty about the future situation in India.

According to studies on the effect of mutant strains on serum neutralization and vaccines, samples taken from people who have received shots and serum from recovered patients showed a twofold decrease in neutralizing activity against B.1.617. Currently, although the total amount of vaccinations in India is next only to the U.S. and China, but due to its large domestic population, the single-dose vaccination rate is just 8%. Such a low rate is far from sufficient to stop the spread of the epidemic. Though the prevalence of the British mutant variant in Israel has had a slightly lower effect on vaccine efficacy, Israel has over 70% protection rate from vaccination, and the pandemic there is said to be completely under control. This again shows that vaccination remains an important weapon against the virus.

Future of Covid-19 in India

In March, there was a relaxation in social controls in India. Several traditional cultural festivals were held without any social distancing measures. And when the latest wave started, the government was not proactive enough in dealing with it, which led to the exponential rise in cases in April. It is now too late for even an acceleration of vaccination. A bigger wave is still likely. Only with extremely strict public health measures, a resolute and correct response from the government and good cooperation from the people can the country survive the current crisis.

Zhang Wenhong is director of the infectious diseases department at Huashan Hospital in Shanghai.