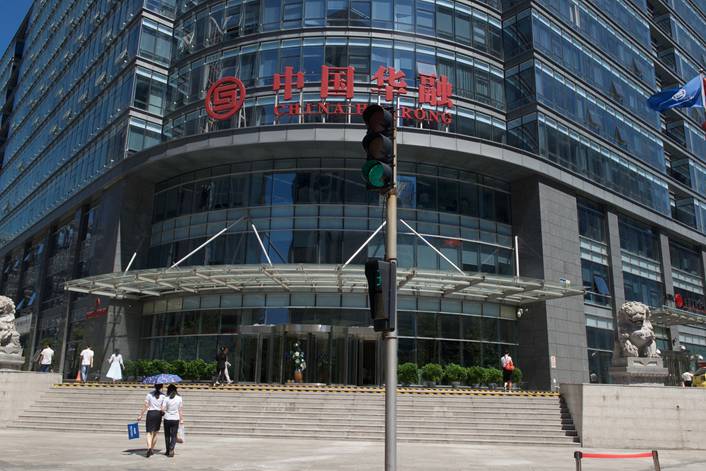 Fitch cut Huarong to BBB from A, becoming the first of the big three international ratings firms to downgrade the state-owned company after it missed a deadline to release 2020 results by March 31. Speculation that Huarong may restructure its debt has jolted credit markets across Asia, with Chinese officials and Huarong itself offering little guidance about the company’s fate.

The downgrade added to selling pressure on Huarong’s bonds even as the company has continued to meet near-term liabilities. Huarong units repaid 960 million yuan ($147.9 million) of bonds and S$600 million ($452.6 million) of offshore debt maturing Tuesday, according to company statements. Huarong’s 3.75% dollar bond due 2022 fell 2.8 cents on the dollar to 79.1 cents while its 4.5% perpetual bond dropped 9.5 cents to 61.2 cents, according to Bloomberg-compiled prices.

The lack of transparency over government support for Huarong may hamper the company’s ability to refinance its debt in offshore markets, Fitch said. The firm lowered its rating on Huarong’s senior unsecured perpetual notes to BB+ from A-, and retained a negative outlook on both the perpetual notes and Huarong as a whole.

The cut to junk territory for the perpetuals underscores how quickly perceptions of Huarong have changed. After trading near par for much of the past few years, the company’s dollar bonds have plunged this month as investors questioned assumptions about Chinese government backing that have underpinned the creditworthiness of state-owned borrowers for decades. Huarong, which is controlled by China’s finance ministry, is among the nation’s most systemically important companies outside its state-owned banks.

“The government may continue to have a high incentive to provide extraordinary support, considering China Huarong’s policy role and the potential contagion risk for the refinancing of similar policy-driven GREs, but Fitch believes timely indication of support has not yet materialized,” the ratings firm said in a statement on Monday. There is “increasing uncertainty over the company’s liquidity, particularly its offshore funding,” Fitch added.

Huarong has some $23.3 billion in outstanding offshore debt, $4.2 billion of which matures through the end of this year, Bloomberg-compiled data show. The drama surrounding the company has effectively shut it out from overseas public debt markets and prompted scrutiny over the issuer’s maturity schedule as investors search for any possible signs of tightening liquidity at the firm.

On Sunday, Huarong announced it wouldn’t publish its 2020 results by the end of this month – missing another deadline from Hong Kong’s stock exchange and prompting a fresh selloff in the company’s bonds. The firm released a brief statement in Chinese, mostly reiterating previous statements. There was no indication of when results would be published or if anything has changed since its April 1 filing to the stock exchange, where Huarong shares had been trading before their start-of-month suspension.

Huarong is also under review for a potential downgrade at Moody’s Investors Service and S&P Global Ratings.