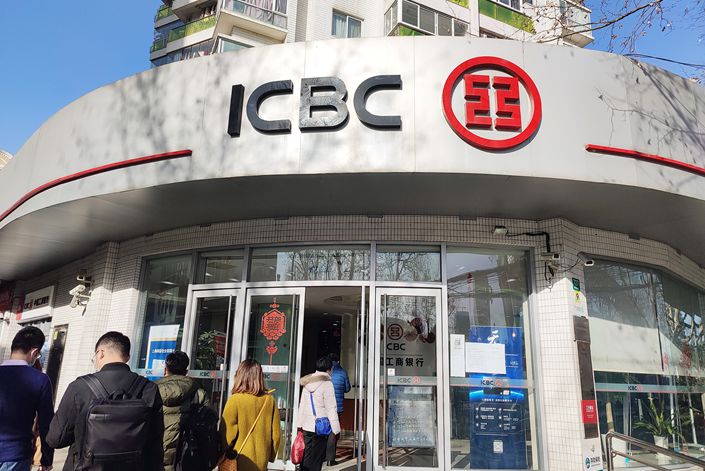 (Bloomberg) — China’s biggest banks fell after posting profit gains of below 3% in the first quarter with policymakers leaning on the lenders to contain debt growth as the economy powers out of the pandemic.

Shares of ICBC fell as much as 1.7% in Hong Kong in early trading on Friday after Nomura Holdings Inc. analysts said the results were “slightly below expectation”. Bank of China and Bank of Communications both declined more than 1%.

Last year’s stimulus pushed China’s debt to almost 280% of annual economic output, the highest ratio since Bloomberg started compiling the data in 2014. The central bank last month asked major lenders to curtail loan growth for the rest of this year on concerns of bubble risks, people familiar with the matter have said.

Even so, Chinese banks benefited from the nation’s record-breaking 18.3% economic expansion in the first quarter after being put on the front-line in helping millions of struggling businesses hurt by the pandemic last year. They are now shifting focus to more prudent credit growth and internal controls as policy makers have renewed a campaign to restrain leverage and curb risks, especially in the closely managed financial and real estate sectors.

The rising loan losses contrast with foreign rivals such as HSBC Holdings PLC, which saw impairments plunge in the first quarter. Chinese regulator CBIRC said this month that the banking industry set aside provisions of 440 billion yuan ($68 billion) in the first quarter, taking the total loan-loss reserves to 6.6 trillion yuan. That has helped them strengthen risk management capability.

Chinese banks advanced 7.67 trillion yuan of new loans in the first quarter. That was 8% more than for the same period last year, when authorities flooded the market with cheap liquidity to help companies through the initial pandemic lockdown.

Appetite for Chinese bank stocks, long regarded as perennial laggards, has grown since late last year as investors hunt for cheaper parts of the market to escape stimulus-fueled valuations. The CSI 300 Banks Index has climbed 12% in the first quarter and traded near the highest in 14 years.

The rally, however, was disrupted since late March on concerns of liquidity tightening and events including China Huarong Asset Management Co.’s unexpected delay of its 2020 financial statements. Uncertainty about the financial health of Huarong, the nation’s largest distressed loan manager, spurred a sell-off in its dollar bonds and triggered broader worries that China may let a state-backed institution fail.

Chinese banks disposed of a record 3 trillion yuan of non-performing loans last year, nearly a third more than a year ago. The regulator said this month banks should tackle even more soured credit in 2021.

“This macroeconomic backdrop is allowing authorities to de-risk the financial system,” said Australia & New Zealand Banking Group economists led by Raymond Yeung wrote in a note this week. For now, “China has sufficient capital to dispose of non-performing loans in an orderly way” even without China Huarong, they said.