Copper’s Surge Toward a Record High Is Hitting Chinese Industry 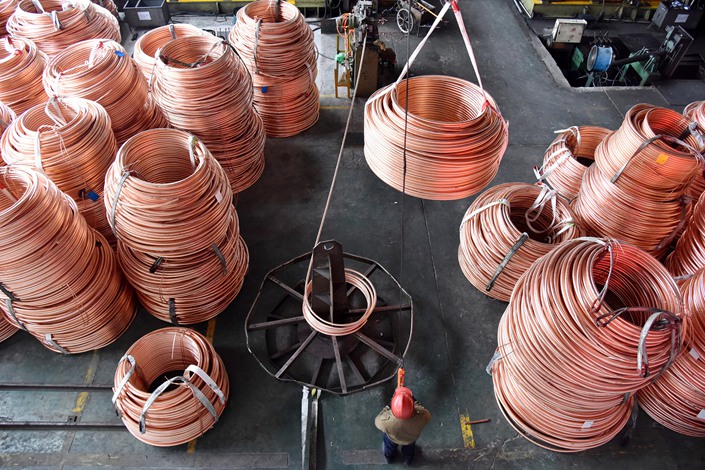 (Bloomberg) — Copper’s surge toward a record high is starting to cause stress for industrial consumers in China, the world’s largest market for the metal.

Some Chinese manufacturers of electric wire have idled units and delayed deliveries or even defaulted on bank loans, according to a survey by the Shanghai Metals Market. End-users such as power grids and property developers have also been pushing back delivery times, while producers of copper rods and pipes saw orders slump this week, said the researcher.

Copper topped $10,000 a ton on Thursday for the first time in a decade and has been among the best performers in a scorching surge in metals prices. The rally is being fueled by stimulus measures, near-zero interest rates and the global economic recovery from Covid-19.

“Domestic copper users are feeling the pain right now after the recent surge caught them off guard,” said Fan Rui, an analyst at Guoyuan Futures Co. Ltd. “Electric wire producers are being hit the most, with smaller plants keeping run rates low as the spike is seen slowing the pace of investment by power grids.”

A gauge of China’s manufacturing industry slipped in April and the services sector also weakened, suggesting the economy is still recovering but at a slower pace. To be sure, analysts at banks including Goldman Sachs Group Inc. are predicting further gains for the metal as the global economy picks up pace.

In sign of potential weakness in Chinese physical demand, the spot contract traded at a discount of as much as 215 yuan ($33) a ton to Shanghai futures’ prices this week, the widest in about 10 months. The appetite for imports is also low, with the Yangshan copper premium, paid on top of benchmark London Metal Exchange prices, slumped to the lowest since data were first published in 2017.

And there is a precedent for demand destruction in China amid higher prices, according to BMO Capital Markets analyst Colin Hamilton. Hamilton pointed to 2006 where prices recorded the largest January-April gain on record and came amid a credit-fueled sudden acceleration in developed world demand.

“2006 was the only year this century where annual Chinese copper consumption fell on a y/y basis, as marginal buyers simply stepped away,” Hamilton said in a note.

Higher price levels also could see marginal buyers pull back in the near term and look to substitute in the medium term.

“$10,000/t copper now is the biggest danger to future demand use, particularly in these nascent trends where material selection is still evolving,” Hamilton said. “There is no doubt copper may be best for electrical or heat transfer performance, but with the ratio to aluminium now well above the 3.5:1 level where we consider substitution accelerates, the risk is clear.”