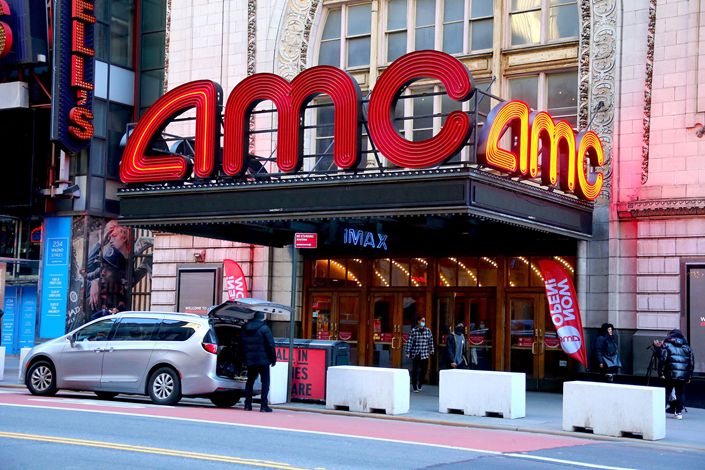 (Bloomberg) — AMC Entertainment Holdings Inc. reported a first-quarter loss of $567.2 million, more than Wall Street expected, as moviegoers trickled back to reopened cinemas but continued to show concerns about the pandemic.

The loss amounted to $1.42 a share, AMC said Thursday, greater than the $1.31-a-share deficit that analysts had expected, on average. Revenue slid 84% to $148.3 million, missing analysts’ predictions of $156.3 million. There was little new to see in theaters during the period.

Still, Chief Executive Officer Adam Aron struck an upbeat note, saying the internet traders who pushed the company’s stock price up more than 320% this year have given him more confidence for the year ahead. Those traders now make up a big share of the company’s 3 million shareholders and have already helped the world’s largest movie-theater chain raise enough capital to last through the end of 2022.

“I’m quite optimistic, about the new shareholder base of AMC,” Aron said on a conference call. “Just go on Twitter, just go on Reddit, just go on YouTube. Read what these people write. They love AMC.”

Investors seemed to share his optimism after seeing the latest results. AMC’s stock rose as much as 3.3% after the close of regular trading.

The internet fervor is in stark contrast to the company’s current financial situation. While AMC has reopened nearly all of its North American theaters, and is slowly bringing customers back to cinemas in Europe, analysts don’t see quarterly revenue topping $1 billion again until the final three months of 2021.

Against that backdrop, AMC sought to shore up its position by asking shareholders to approve the issuance of 500 million new shares. But the company backed away from that plan, which investors were set to vote on at the May 4 annual meeting, and postponed any action while management engages its new investor base. AMC also said a smaller share would be adequate.

The delay indicated the proposal might fail, while other measures up for vote were on equally shaky ground. Two proxy advisers, ISS and Glass Lewis, recommended investors vote against Aron’s pay package, saying a $5 million discretionary cash bonus was excessive in light of the Covid-19 crisis. The new meeting will take place on July 29.

Aron also detailed steps he is taking to engage his social-media fans and new shareholders. Previously, the company was controlled by the Dalian Wanda Group Co., which he said meant he had to fly to China to speak to “three or four people” who had the power to control major corporate decisions. Now, with the more decentralized ownership base, he has started tweeting, sat for an interview on YouTube, and also procured $100,000 in donations to the Dian Fossey Gorilla Fund, which helps the endangered animals. Some web investors who are particularly supportive of AMC call themselves “apes” or the “gorilla gang” online.

AMC expects to be cash flow negative for at least the next two quarters, with costs rising as more movies are released and cinemas sell more tickets. The chain has raised $2 billion since December to weather the continued effects of the pandemic, and said that’s enough to last through the end of next year, assuming the U.S. box office reaches about $8 billion.