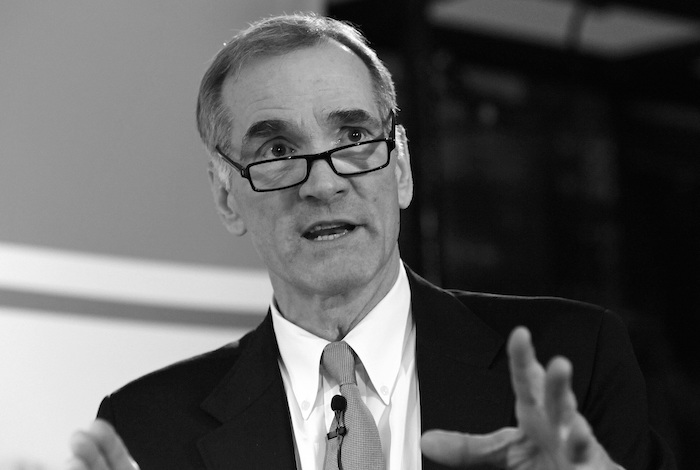 The passing of my dear friend and mentor David Swensen brings me great sorrow. We have lost a true visionary.

I find it challenging to convey the magnitude of David’s impact on my life. David, Yale University’s longtime endowment chief, was my first teacher in the discipline of investing; he taught me what it meant to be a fiduciary, to focus truly long-term, and to build an organization with a soul.

I was a student when I first met David. I didn’t have the money to pay for my second year of tuition at Yale, and I was desperately looking for a job. David gave me a chance with an internship at the Investments Office. I was interested in business generally, but before I met David, I had never been exposed to investing.

My initial project for David was to translate his book, “Pioneering Portfolio Management.” David has an expansive vocabulary, and this was a tough task (for example, try translating “eleemosynary” into any language). One concept in the book I encountered for the first time was “fiduciary.” There was no satisfactory translation I could find at the time, so I did my best to put together the correct words to express this idea. It was important to get this right because fiduciary responsibility was a principle that guided many of David’s decisions. Over the years, David served as a model for what it means to be a fiduciary, to align your interests with your partners, and to safeguard the economic interests of your investors, the people who placed their trust in you.

Over the course of my internship, David must have answered hundreds of basic questions from me about investing. He had an office that he barely used, preferring to sit out on the open trading floor with all of our colleagues, so that we knew he was always available to speak to. Outside the office, he answered my questions between squash sets and during breaks in our summer softball games with his cherished Investments Office team, the Stock Jocks. I consider myself a half-decent squash player, but I was never able to win a game against David — he used his gangly arms to full advantage, placing strategic shots that landed just out of my reach.

David was quite literally a miracle, having beaten back a serious cancer for nine long years. Even when he was deep into courses of physically draining radiation treatments, he was still checking in on the portfolio, debating with the team, and exchanging insights with his investment managers. He faced his disease with grace and determination, never for a moment letting it get in the way of the work he loved or distracting him from helping those who asked for his help.

David’s incredible generosity with his time extended not only to me but also to our colleagues and the hundreds of students who sought his advice. His lunchtimes were often given over to students, helping them think through what kind of career to pursue and what kind of life they wanted to live. David believed that one of his most important responsibilities was to teach. I was honored to have been a guest speaker a handful of times over the years at his undergraduate Investment Management seminar.

Four years ago, David inspired me to create the Hillhouse Value Investment Institute, a nonprofit education group dedicated to teaching the principles of long-term investing. David graciously agreed to be its honorary chairman. Just a few months ago, David and I were discussing plans for him to teach a course at the institute, a prospect that thrilled our students.

Nothing is more emblematic of David’s commitment to the long-term than the seriousness with which he pursued teaching, and his belief in investing in people. He worked tirelessly to help those around him reach their full potential and to guide them toward a path that allowed them to create value for society.

David had confidence in me when few people did. When he made the decision to seed Hillhouse, I was 32 and I had never managed a portfolio. My partners at the time (who are still my partners), did not come from the investment world. The only thing we had in common was that none of us had managed investments before and that we all had an unbounded eagerness to learn. I later found out that when the Yale team did their due diligence on me, one of the comments that emerged was, “Sure, Lei’s smart and a good guy, but I don’t know that he has done much investing before, are you sure you want to give him actual money?”

I’ve asked David why he invested in Hillhouse at a time when surely no other institutional investor would have taken the chance. He said, when you work with the right people, something good is bound to happen. This has become a mantra now at Hillhouse: “Spend quality time with quality people.” I think this is perhaps the most important lesson about investing, and David knew it by heart.

David loved Yale, and he loved the mission of higher education. He believed that education transformed lives and that he was living proof. Even if he didn’t tell you about this passion of his, you could probably guess it from the endless rotation of “Yale”-emblazoned fleece vests that, along with khakis, constituted his unofficial work uniform. David was extraordinarily proud that the work he and his colleagues did enabled the university to support cutting-edge research and attract the best and brightest talent, regardless of financial circumstance.

David radiated purpose, giving those of us who worked with him a kind of energy that is difficult to replicate in financial rewards. It is no surprise that many of his team were with him for decades or that many of our colleagues went on to other great universities to carry on work they first began under David’s tutelage.

David called mission-driven firms “organizations with a soul.” After many years of investing in and building organizations, I absolutely agree with David that these types of teams are often the most innovative and cohesive and have a higher chance of building long-lasting firms. I am grateful to have learned this lesson from David early in my career.

One of the last times I saw David was in New Haven, a few months before the pandemic put the world on hold. David was on a new course of cancer therapies, which had caused his legs and feet to swell. I imagine it must have been quite painful for him to walk. Despite this and our strenuous expressions of concern for his comfort, David insisted on giving my family his famous Yale Tour; the sunshine and fresh air would be good for him, he said.

David accompanied us for nearly two hours, crisscrossing Old Campus and Cross Campus. Yale’s buildings are replete with gargoyles and other statues that are tucked into its many nooks and crannies. David took us into the Sterling Memorial Library to show my family his favorite statue. “Here it is!” He pointed gleefully to a small statue of a student bent over a book, into which the architect, James Gamble Rogers, had carved “U.R.A. JOKE.” My young son started laughing, and David joined him, letting out one of his distinctive guffaws.

That is one of my last memories of David, standing in the stately halls of his beloved Yale, sharing a punchline with a child. David was exceptionally serious about investing with the right partners, about serving the mission of higher education, and about helping those around him reach their full potential. David was also self-effacingly Midwestern, willing to spend time with those of us who knew the least and perhaps needed him the most, patiently fielding a long list of questions about investing, careers, and how to live a purposeful life. I am forever grateful to have had him as my mentor and my friend.