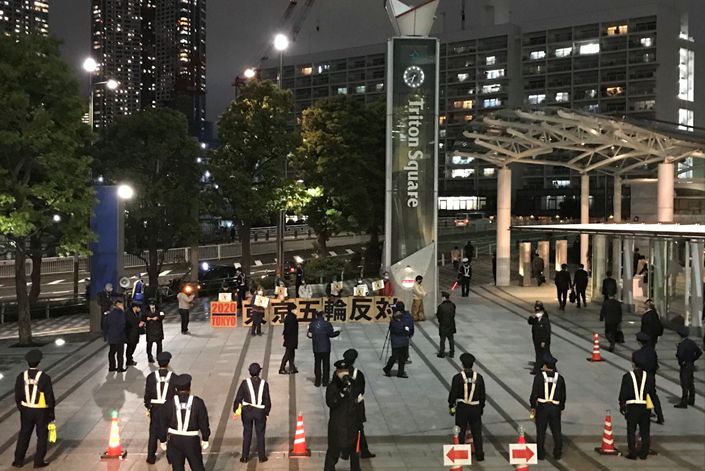 A friend of mine, a sushi restaurant owner, abandoned his outlet in Ginza, a glittering shopping and dining district before the pandemic, and moved to the suburbs due to a sharp drop in customers. This week, he announced that his restaurant would not follow “requests” by the Tokyo Metropolitan Government to stop serving alcoholic beverages and shorten business hours.

Such feelings of frustration and even anger can now be found in every corner of the capital, which has been under a constant state of emergency this year, except for a brief period. Japan’s pandemic control and prevention, unlike other countries, has almost entirely depended on people’s voluntary cooperation.

Some simple — yet fundamental questions remain unanswered. “Do we have to put up with these restrictions just for the Olympics?” “Why should the Olympics be an exception when even student sports events have been called off?”

An anti-Games protester in her 30s, standing outside a gigantic building where the Organizing Committee is based, told me she has felt the change in atmosphere. Once referred to as “anti-Japan,” the protests are more welcomed these days on social media. I witnessed some office workers, on their way home, were taking photos of the protest, as if they are showing sympathy.

There is little wonder why the latest Japanese public polls show that as many as 80% of respondents want either the cancellation or another postponement of the Games.

On May 22, the number of hospitalized Covid-19 patients with severe symptoms topped 1,300 for the first time since the outbreak in early 2020. With hospitals overcrowded in major cities, some patients with severe symptoms are unable to receive adequate treatment. This has led some local governments to decide not to free up any medical resources for the global sports event.

The clock is ticking.

Scheduled to end on May 31, the ongoing state of emergency in nine prefectures, including Tokyo and Osaka, is likely to be extended until 20 June. Meanwhile, the Tokyo Olympics is set to start on July 23 and the following Paralympic Games will not end until Sept. 5.

Experts warn that an early lifting of emergency would be risky. Currently, more than 90% of the existing cases in Japan have been infected with the more contagious U.K. variant. In addition, the Indian variant, which may be even more contagious, appears to have started its community transmission. Unfortunately, the virus will not follow government instructions.

Despite doubts both inside and outside Japan, the International Olympic Committee (IOC) and the host government are pushing hard for what they call “safe and secure” Games.

In a statement that made many Japanese people’s jaws drop, IOC deputy John Coates said during a press conference on May 21 that the Games will go ahead whether there’s a state of emergency or not.

IOC President Thomas Bach, who was sarcastically called “Baron Von Ripper-Off” by a Washington Post columnist, has delayed his planned trip to Japan from mid-May to mid-July.

Meanwhile, for Prime Minister Yoshihide Suga, whose popularity has significantly diminished due to slow response to the virus spread, the Games are a matter of life and death.

If canceled, Suga could be asked to step down. As another test, he must dissolve the Lower House and hold a general election no later than this October.

Against this backdrop, Suga identified vaccination as a game-changer, increasing efforts to accelerate the process so that the inoculation for the elderly can be completed by the end of July.

Bach estimates at least 75% of participating athletes will be vaccinated before landing in Tokyo.

A dark horse is the governor of the host city, Yuriko Koike. She appears less enthusiastic about the Games than Suga, and has said merely that she will “continue to make preparations.” There is speculation that she might suddenly call off the event in early June, ahead of the Tokyo Metropolitan Council Election. The 68-year-old veteran politician is excellent at capturing voters’ sentiment and tends to act opportunistically.

It is worth noting that she recently met with LDP Secretary-General Toshihiro Nikai. In April, this influential man behind the prime minister surprised the world by saying “if it’s too difficult (to hold the Games), they should be canceled.”

Still, it is not easy to predict Japan’s final decision. Part of the reason is that major nationwide dailies, including Asahi, Mainichi, Nikkei, Yomiuri, are sponsors of the Games. In stark contrast with U.S. dailies that run critical pieces, none of these media outlets are calling for cancellation in their editorials, making the reporting opaque.

After banning overseas spectators, Japan may be prepared to use the last card left in its hand, which is to adopt a “completely spectator-free” approach. But that would mean further financial damage to the organizers as much-anticipated ticket revenue will be gone.

On the other hand, in the rare event of cancellation of the Games, the IOC might send a compensation bill, which means additional cost, on top of the already overstretched budget, may have to be borne by Japanese taxpayers.

This could worsen the Japanese economy, which is now experiencing the second dip of the pandemic-led downturn. According to the International Monetary Fund prediction, the world’s third-largest economy will grow by just 3.3% this year, lower than almost all developed economies that are entering the post-epidemic recovery cycle.

Kaori Yamaguchi, Japan Olympic Committee’s executive board member, was the first to say the Games should be postponed last year. Her latest comments, in an interview with Kyodo, are sobering.

“Japanese citizens have many doubts, but the IOC, the Japanese government, and the Tokyo Organizing Committee have no intention of listening to their opinions. The foundation of peacebuilding is dialogue, and an Olympics that rejects dialogue is meaningless.”

Asked whether the Games should be held or not, she said that the timing for cancellation has been missed, adding that the Tokyo Olympics have been "forced into a situation where we can’t even stop the Games.”

The Tokyo Olympic Games are destined to be remembered in history as imperfect ones. What we are yet to witness is how imperfect it will be.

Chen Lixiong is Caixin Media’s correspondent based in Tokyo.