Blog: When It Comes to Parenting, Fathers Can Do Just as Well as Mothers 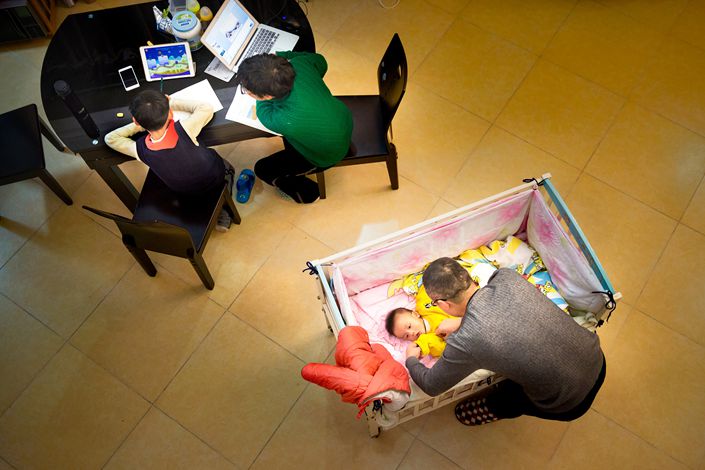 When economics professor Li Jingkui started regularly taking his daughter to her after-school classes, he noticed that he was mostly surrounded by mothers. That got him thinking about the men and women’s child-rearing roles throughout history, along with of his own experience growing up in an farming town in northern China. He came to the conclusion that the traditional division of labor between men and women is defined by productivity and the status of the sexes, both which are changing rapidly nowadays.

Since my return to China earlier this year, I have become the apple of my little girl’s eye. Even the important job of taking her to the youth center for after-school classes was entrusted to me.

I was obviously flattered; I put away all the books I was reading, canceled all my meetings and turned down all dinner invitations. I brought her to class every weekend and mingled with the other parents at the center.

I would say around 70% of the parents there were women. Of the 30% who were male, most obviously did not go there often. Male parents like me, who both frequented the center over the last two months and who were at ease chatting with the mothers, were few and far between.

So, should mothers always be the ones taking their kids for after-school lessons?

This question could be easily answered in ancient China or even just 40 or 50 years ago. One might say this has always been how human society divides the work of the household — because the mother is better at caring for the child, she is naturally entrusted with taking the child to classes.

In 1776, the Scottish philosopher Adam Smith, once a professor of moral philosophy at the University of Glasgow, published his magnum opus: “An Inquiry into the Nature and Causes of the Wealth of Nations.” This key work laid the foundations of the economics discipline, which is why Smith is also called the “father of modern economics.”

Division of labor for better productivity

Smith opened his book, commonly referred to by the shortened title of “The Wealth of Nations,” with this central thesis: “The greatest improvement in the productive powers of labour, and the greater part of the skill, dexterity, and judgment with which it is any where directed, or applied, seem to have been the effects of the division of labour.”

Then, he gave the famous example of the pin-maker.

Smith said that pin-making was a “very trifling manufacture” but one “in which the division of labour has been very often taken notice of.” He explained that a workman not educated to this business, nor acquainted with the use of its machinery, could at the very best make one pin in a day, and certainly could not make 20. But as the business developed into “a peculiar trade that is divided into a number of branches,” where “one man draws out the wire, another straights it, a third cuts it, a fourth points it, a fifth grinds it at the top for receiving the head ...”, the business of making a pin became divided into about 18 distinct operations, each of which could be performed by a distinct pair of hands. As such, a team of 10 could make 48,000 pins in a day!

Observably, such a division of labor greatly increases productivity and in turn, the wealth of society.

Humankind’s earliest division of labor is perhaps that between man and woman.

In the Stone Age, the men of a tribe went out to hunt while the women foraged closer to home, reared small animals, and took care of their household. But in a different era, the same division of labor gives rise to a different power structure. Why? Because when men and women’s productivity level changes, the survival risks under such a division of labor start to change.

When productivity was low, that is, when the men’s hunting tools were ineffective, hunting was a high-risk activity. I am not referring to the activity being dangerous or life-threatening, but rather that the men might track prey for several days and still not succeed. If so, a tribe would not have a surplus of food supply, and the survival of the entire tribe would have been uncertain if hunting was its only mode of subsistence. While hunting skills that men developed were important, during that time and age, women’s gathering skills could better guarantee the survival of the tribe. This is the reason why I believe matrilineal societies existed in history.

However, as humans continued to improve their hunting skills and as men continued to upgrade their equipment, successful hunts became frequent and common, and food sources gradually stabilized. This meant men surpassed women in the race to provide sustenance for the body. Thus, human society transitioned from being matrilineal to being patrilineal and we have what we call today a patriarchal society.

Productivity and patriarchy in the agricultural and industrial ages

In a patrilineal society where men are deemed more productive, women either have to take the initiative or are forced to seek shelter under the protection of a man to survive. However, if the men are unable to ensure that the children borne by the women are their own, they would perhaps be unwilling to take care of them or to invest human capital. This is detrimental to maintaining and raising the productivity of the entire tribe. Thus, the marriage system developed in which a man is allowed to have one or more wives, and the children that his wives give birth to can basically be regarded as his own, at least in a social sense. At the end of the day, it may be an overstatement to say that the marriage system is a type of property system, but we can at least say that the institution of marriage is a new form of human cooperation of a particular stage of productivity.

In an agricultural society, men are physically stronger than women and are still the main labor force in farming, thus maintaining the characteristics of a patrilineal society. Hence, the so-called saying that “the father guides his sons and the husband guides his wife” (父为子纲，夫为妻纲) is actually still a type of power structure demonstrated by the division of labor between men and women under a particular stage of productivity.

Even in the industrial age dominated by the manufacturing industry, male labor is still the main source of household income. Thus, females remain dominated by males and naturally take on the responsibility of raising children. That is because this task does not generate income, it naturally falls to family members with lower productivity.

Are women today benefitting from another role reversal?

However, the situation has drastically changed in modern society. The widespread use of machines in industry and the more precise division of labor in the modern economy have made collaboration more important. And women, having designated tasks for family members and coordinated various interpersonal engagements over the long course of history, have gained the upper hand while being in the weaker position. In today’s society where office work has become the mainstream, women display strong advantages. The feminist movement thus began in developed western countries in the latter half of the last century. Now, following the development of globalization, the more free and prosperous the economy, the higher the status of women.

I feel deeply about this as I lived for more 20 years in northern China, and later on for another 20 years in the South.

I was born in an agricultural town in the north and later went to Hangzhou to study and work. When I was little, my grandmother and mother were not allowed to eat at the dining table in the central hall when we had guests over. They could only eat in the kitchen. Without a doubt, raising children was almost always the responsibility of the women in that era. Fathers mostly asked about how the children were doing occasionally and disciplined them if they did badly on their exams. Of course, the men were in charge of earning a living. But when I arrived in Hangzhou, the status of women and men was the complete opposite of what it was like back in my hometown. In Hangzhou, women are much more well-respected by men than in the North.

Based on my chats with other parents, if a family does not have to take care of the elderly at home, and if the income of the woman is higher than the man, the man will generally be the one accompanying the kids to their lessons. Of course, this sample size is not big enough and my conclusion may not be representative of the overall situation in Hangzhou, let alone society at large.

Co-parenting to win the child-raising war

However, objectively and generally speaking, in today’s world, choosing a parent to accompany his or her children to their lessons no longer hinges on their level of productivity. Today, raising children is like fighting a battle. To win the battle, we must fight together. In my family, my wife and I are just taking charge of different branches of the army. Specifically, I am responsible for manual labor like accompanying my children to their lessons, while my wife is responsible for the large amount of work that needs to be done on the smartphone because I have no clue how any of it is done. But I know that some families are the complete opposite of us.

From this perspective, those who think that women are naturally suited to educating children while men are unsuited to the role have actually forgotten that this is all simply the effect of the division of labor, rather than the cause of that division. Although men are indeed unable to give birth, they are certainly capable of doing almost everything else such as feeding the child using bottled milk, changing their diapers, and accompanying them to their lessons. These tasks are not inherently different from the tasks of making bows and arrows and setting traps in primitive society, but the separation of duties is simply the effect of the division of labor in the name of survival.

In response to this, Smith wrote: “The difference of natural talents in different men is, in reality, much less than we are aware of; and the very different genius which appears to distinguish men of different professions, when grown up to maturity, is not upon many occasions so much the cause, as the effect of the division of labour.”

For Smith, the difference between a learned philosopher and a common street porter was hardly about the former being gifted with intelligence, as some philosophers liked to say. In his view, this huge difference “seems to arise not so much from nature, as from habit, custom, and education,” and is the result of putting into practice what one has learned from different experiences.

If what Smith said is correct, then men are not necessarily inherently inferior to women in raising children, and neither should it be taken for granted that women should stay at home to raise and educate children.